A national survey of 1,500 adults fielded by the Intelligence Project and Tulchin Research revealed that Americans understand white supremacy and other forms of racism as a threat to our society, but still struggle to connect those issues to systemic and structural racism.

The survey was conducted in late August against the backdrop of COVID-19 and following months of sustained protests for racial justice opposing the extrajudicial killings of unarmed Black people. The Intelligence Project sought to better understand what American adults believe about white supremacy and its deep roots in the systems and structures of the United States.

A shallow understanding of racism 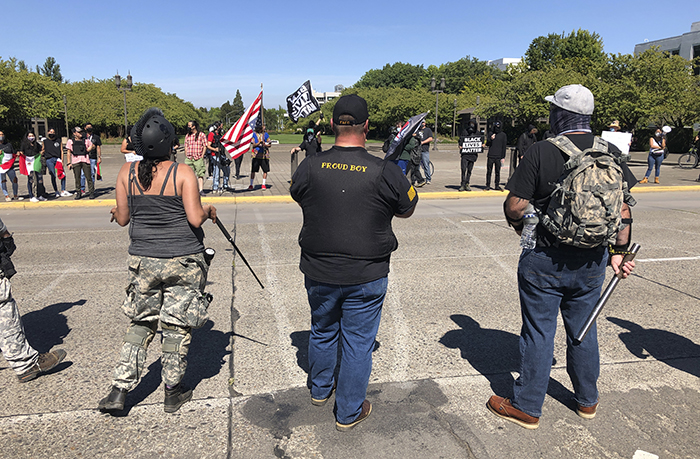 Supporters of President Donald Trump and Black Lives Matter protesters confront each other in September at the Oregon state Capitol in Salem. (Photo via AP Images/Andrew Selsky)

And yet, when polled on feelings related to the changing demographics of the United States, only half of all those surveyed said they had positive thoughts about these changes. Roughly four in 10 white participants responded negatively.

The United States Census Bureau predicts that whites will lose absolute majority status within 25 years. This development has been one of the most potent drivers of modern white supremacist hate groups, who portray these trends as part of a conspiratorial and intentional program designed to eliminate white people. Historic levels of white nationalist groups – 155 individual, active chapters in 2019 and a 55% increase since 2017 – underscore the urgency with which these narratives must be confronted.

The survey also revealed that respondents had a limited understanding of racism and the role it plays in American society. Only 58% of participants agreed that racism is a “specific system of beliefs and behaviors based in white superiority, whether conscious or unconscious, and results in oppression of specific people or groups.” In contrast, a definition of racism that made direct mention of prejudice, discrimination and antagonism saw agreement reach 83%. These findings indicate that Americans have a shallow understanding of how racism shapes contemporary American life and tend to miss the connection between overt white supremacy and deeper, structural racism. For instance, when asked why national poverty rates are disproportionately higher among people of color, 49% of respondents cited a lack of work ethic. This belief was slightly more prevalent among non-white respondents and varied little with age and level of education. The prevalence of this viewpoint demonstrates the strength of racist narratives around poverty and widespread failure to recognize how race affects access to economic opportunity.

Further, only 38% of respondents were convinced that systemic racism played a major role in why people of color live shorter lives than white people, even amidst a global pandemic that is disproportionately affecting Black Americans. Only 31% of white respondents were either very or somewhat convinced of this fact, as compared to 49% of non-white participants. Skepticism increased significantly with age.

Throughout 2020, American society has continued to grapple with the heinous killings of unarmed Black Americans by police officers. These events spurred nationwide and international protests against these killings and amplified calls to address racist policing. And yet, Americans still fail to draw a connection to the widespread role of racism within our law enforcement agencies.

Only 36% of respondents believe “racism in our police departments is widespread and requires fundamental and institutional change,” while 42% subscribe to the “bad apples” narrative, which suggests that racism in police departments is isolated to a few bad cops and the system itself is not inherently racist. In fact, when asked about police killings of unarmed blacked men in America, 42% of respondents share the view that “this rarely occurs and attracts more media attention than it should.”

Due to the failure to see racism in policing as a systemic issue, there is also an inability to grasp the meaning behind the Black Lives Matter protests that have occurred across the country since this spring. The findings show that only 40% of respondents believe the protests are justified, while 51% believe “the protests are not justified because the actions of a few bad cops have been used to incite even more violence.”

Lack of support for armed militias

According to the survey results, three-quarters of respondents are concerned about civil unrest (77%) and the loss of law and order and respect for law enforcement (76%). This concern coincides with an increase in militia and paramilitary activity.

The deadly consequences of militia activity in the United States were on full display on Aug. 25 in Kenosha, Wisconsin, when 17-year-old Kyle Rittenhouse, of Antioch, Illinois, was arrested in connection with the fatal shooting of two protesters and the maiming of a third. Rittenhouse’s actions transpired during protests focused on the police shooting of Jacob Blake, an unarmed Black man who is now paralyzed after being shot in the back seven times. The night of the shooting, armed civilians were in Kenosha to support a local militia group who believed that their presence was required to protect the city from protesters.

The Intelligence Project’s polling data shows that Americans do not support the presence or actions of militia groups and armed paramilitary groups in the United States.

In fact, 55% of respondents had either a somewhat or very unfavorable view of militia groups. Similarly, more than a third of respondents believe “armed protesters in state capitol buildings” and “armed paramilitary groups” – a common sight at “anti-lockdown” protests in response to state measures to contain the coronavirus pandemic – pose a significant threat to the United States. The survey results also show national concern about assault weapons and military grade firearms, with 60% of respondents believing these weapons played a role in recent mass shooting tragedies.

In thinking about how the United States can better educate its citizens on the synergetic relationship between racism and damning societal disparities that exist between people of color, particularly Black Americans, and non-white Americans, the polling shows that anti-racist education may provide a path forward.

When asked about how to best to reduce hate and extremism in America, approximately three-quarters of respondents (70%) indicated that they strongly (41%) or somewhat (29%) support anti-racist education. Additionally, the survey showed significant support (67%) for “[requiring] public schools to include multicultural lesson plans in their curriculums, including the history of racial prejudice and violence, including slavery, lynching and Jim Crow laws.”

While the Trump administration has sought to use the Department of Education as political tool through which to implement a whitewashed version of American history, the American public appears ready and eager to challenge preexisting interpretations of our shared history. As the poll results suggest, there is a fundamental understanding that the country must sincerely confront and address its past, including the ways in which that past has manifested itself in deep, structural inequality, before moving forward.