A law firm associated with activists on the far-right fringe registered the Limited Liability Company (LLC) Stop the Steal in Montgomery, Alabama, in November, state records show. “Stop the Steal” is the name of a nationwide protest movement focused on overturning President-elect Joe Biden’s win in the 2020 election based upon unsubstantiated claims of voter fraud. 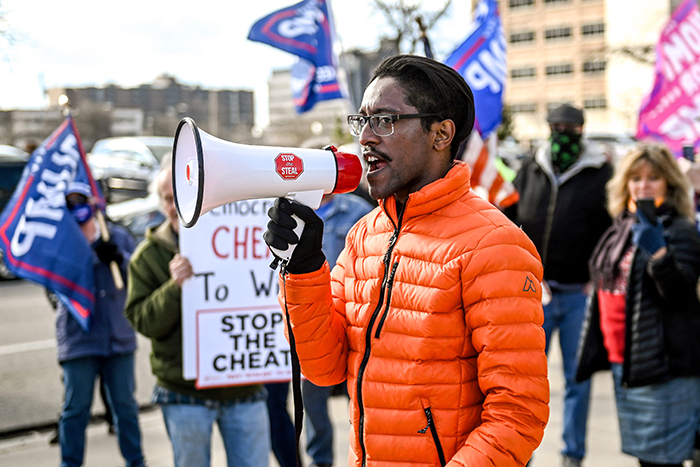 Ali Alexander, national organizer of Stop the Steal, speaks to a group protesting outside the Secretary of State building on Monday, Nov. 23, in Lansing, Michigan. (Photo by Nick King/USA Today Network)

Hatewatch has so far been unable to determine what the LLC does, but it borrows from a brand name first associated with Roger Stone Jr. A former adviser to Donald Trump and a convicted felon, Stone first launched Stop the Steal during the 2016 election as a group of poll watchers tasked with disputing Democratic votes in urban, multiracial areas. Like the current iteration of Stop the Steal, Stone gathered the group together under the auspices of fighting voter fraud, as Hatewatch has reported. Hatewatch reached out to Stone by phone and email, but he did not respond.

Baron Coleman also represents Proud Boys founder Gavin McInnes in his defamation lawsuit against Southern Poverty Law Center, which is based upon its designation of them as a hate group. Alexander and lawyers for Baron Coleman appeared with McInnes outside the center’s headquarters in Montgomery on Feb. 4, 2019, when he announced that suit. Alexander told Hatewatch over text that Baron Coleman advised him in responding to Hatewatch’s request for comment.

“[Baron Coleman] advised me to tell you not to contact me while I’m representing a client suing y’all. Conflict of interest. Thanks!” Alexander wrote.

Alexander does not appear to be an attorney, so it is unclear what he meant by representing. Alexander is a far-right operative linked to a number of political smear campaigns and is known for posting disinformation to Twitter. One example of that behavior includes a sustained campaign he created promoting the unsubstantiated claim that Biden is “sick” and suffers from some form of otherwise unreported, degenerative illness. Mother Jones reported that Alexander is a convicted felon. Hatewatch obtained records showing Alexander entered a guilty plea on charges of “debit card abuse” in Tarrant County, Texas, in April 2008. He went by the name “Ali Akbar” at that time.

Hatewatch followed up with another text, but Alexander did not respond. Hatewatch was therefore unable to ask him about the LLC.

I received your request for comment and don’t have much I can add. As you know any conversations between my clients and me are privileged.

Stop the Steal, LLC, is an Alabama limited liability company I organized for clients of mine. I’m afraid I’m limited by my professional duties to defer to my clients – owners of the privilege – on whether they would like to add anything more.

I appreciate you reaching out. If you can think of anything else I can help you with, please don’t hesitate to contact me at your convenience. I’ll do my best to answer anything that isn’t privileged.

Stone appeared with Alexander in the trailer of an apparent film about Stop the Steal activism, which was published to Twitter on Dec. 9. The trailer also featured an appearance by white nationalist live-streamer Nick Fuentes and anti-immigrant pundit and VDARE contributor Michelle Malkin, among other activists who are promoting the falsehood that Trump won the 2020 election. Proud Boys have also turned up at Alexander’s events. At a Stop the Steal-linked event on Dec. 12, members of the hate group reportedly took down two Black Lives Matter banners from two historic Black churches in Washington, D.C., and destroyed them. The Washington Post reported that police were investigating the incidents on hate crime charges.