Thousands of pro-Trump extremists stormed the U.S. Capitol on Wednesday as part of a Trump-endorsed Stop the Steal rally in Washington, D.C. But after the riot spun out of control, some on the right turned to a familiar boogeyman in search of a scapegoat: antifa.

Throughout Wednesday afternoon and evening, pro-Trump commentators and even some elected officials – such as Reps. Mo Brooks, R-Ala., Paul Gosar R-Ariz., and Matt Gaetz, R-Fla. – boosted baseless claims that antifascist activists had infiltrated the rally and turned it toward violence. They did so despite the fact that, as BuzzFeed, NBC News and other news outlets have noted, pro-Trump rallygoers had been talking about their plan to storm the Capitol for weeks. 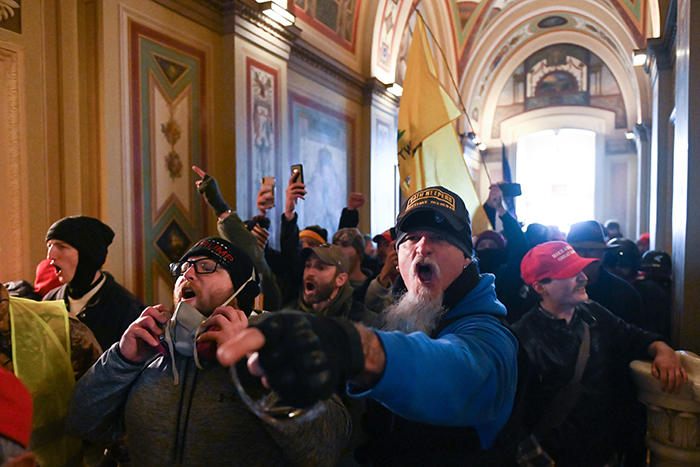 Supporters of President Donald Trump protest inside the U.S. Capitol on Jan. 6, in Washington, D.C. (Photo by Roberto Schmidt/AFP via Getty Images)

“Some of the people who breached the Capitol today were not Trump supporters. They were masquerading as Trump supporters, and in fact were members of the violent terrorist group antifa,” Gaetz said in a speech on the House floor on Jan. 6 as lawmakers moved to finalize the electoral college votes. Gaetz cited a now-corrected Washington Times article published on Jan. 6, which claimed a facial recognition company known as XRVision had identified two men as antifascists from Philadelphia.

XRVision says its goal is to provide analytics for “uncontrolled, crowded and in-motion environments.” However, as OneZero noted, its facial recognition algorithm has not been tested by the National Institute of Standards and Technology, which is used by facial recognition companies to legitimize their work. In addition, the company’s CTO, Yaacov Apelbaum, has posted dozens of articles on his personal blog spouting disinformation focused on Hunter Biden, who’s become a point of obsession on the far right. In one blog post from Oct. 15, Apelbaum claimed to have used XRVision’s platform to verify a trove of images allegedly from Hunter Biden’s computer.

The claim began picking up traction Wednesday afternoon after thousands of pro-Trump protesters stormed the U.S. Capitol building, resulting in the deaths of four people. Lin Wood, a pro-Trump lawyer behind several lawsuits challenging Joe Biden’s electoral win, tweeted what he claimed was “indisputable photographic evidence” of antifa’s involvement. The tweet, which was posted on the afternoon of Jan 6., contained two images – one of a group of men inside the Capitol building during the riot, and another of former Maryland State Skinheads leader Jason Tankersley alongside former Traditionalist Worker Party head Matthew Heimbach from an antifascist site in Philadelphia. Wood incorrectly identified one of the men at the Capitol as Tankersley, then incorrectly described Heimbach and Tankersley – who both have documented histories in the organized white power movement – as members of an antifascist group. Though Wood didn’t mention the source of the photos, he mirrored the claims published in The Washington Times.

Wood was subsequently suspended from Twitter on Jan. 7. He had about 1.2 million followers at the time of his suspension. Likewise, XRVision issued a statement on Jan. 7 denying that they had provided information to The Washington Times proving that two members of a Philadelphia antifascist group. Nevertheless, they repeated the same erroneous claim that the image Wood and others had circulated was of Heimbach and Tankersley. Shortly thereafter, The Washington Times retracted the piece, only to later repost it with a correction

Others promoted the baseless notion that busloads of antifascists had “infiltrated” the pro-Trump riot. Paul Sperry, the former Washington bureau chief for the far-right website WorldNetDaily, claimed in a tweet that a “former FBI agent” at the Capitol building had informed him that “at least 1 ‘bus load’ of Antifa thugs infiltrated peaceful Trump demonstrations.” Texas Attorney General Ken Paxton reposted Sperry’s claim, adding a comment stating that the pro-Trump protesters weren’t actual Trump supporters.

Similar canards were broadcast on all three Fox News primetime shows by guests and anchors alike, according to Media Matters for America. Rep. Mo Brooks, for instance, speculated on “Lou Dobbs Tonight” that the individuals who stormed the Capitol could be from “any number of groups, anarchist or what have you, that could have taken advantage of this opportunity to try and vandalize the United States Capitol.” Brooks was one of the first lawmakers to advance the conspiracy theory, when he reported Wednesday afternoon that he had been told of a “rumor” that “ANTIFA fascists in backwards MAGA hats” were involved in the breach of the Capitol building. On Thursday, he followed up with another tweet, claiming that there was growing evidence that “fascist ANTIFA orchestrated [the] Capitol attack.”

These groundless conspiracy theories provide cover for members of the pro-Trump right who supported the Jan. 6 rally before its violent turn. They also demonstrate the Trump administration’s and its supporters’ efforts to blame every incident of political violence on antifa, which FBI Director Christopher Wray has described as “not a group or an organization. It’s a movement or an ideology.” A day before the insurrection, on Jan. 5, the White House issued an executive order aiming to ban travel to the United States by individuals associated with antifa. The document cited an alleged attack on far-right provocateur and commentator Andy Ngo, who has been a vocal proponent of labeling antifa as a terrorist organization. Then, less than 24 hours before Trump’s scheduled speech to his supporters, the president tweeted, “Antifa is a Terrorist Organization” and tagged a slew of federal agencies, including the Department of Homeland Security, the Department of Justice and the FBI.

Facing a wave of resignations from the Trump administration, calls for his impeachment, and looming criminal charges against those who organized the event, the far right’s embrace of these conspiracies is an attempt to deflect any and all blame for violence.