An Oregon man who is alleged to have fired shots into a federal court building in Portland last week had, over the preceding months, expressed increasingly violent and conspiracy-minded beliefs across a range of online platforms.

Cody Levi Melby, 39, of Beavercreek, Oregon, was arrested after allegedly firing five shots into the Mark O. Hatfield Federal Courthouse in downtown Portland on Friday, Jan. 8. His internet activity reflected the influence of both the QAnon conspiracy theory and allegations made by Donald Trump in the aftermath of his election loss. The same man was also previously arrested at a protest at Oregon’s capitol in Salem on Jan. 6, the same day that pro-Trump extremists in Washington, D.C., stormed the U.S. Capitol.

Melby, a military veteran, was charged with depredation of government property in connection with the incident, which allegedly left three bullet holes in the exterior of the courthouse. A criminal complaint filed on Sunday, Jan. 10, includes stills from a security camera on the exterior of the building. The government says the stills show Melby opening fire with a handgun on Friday evening. It further alleges that there were five spent shell casings at the scene. 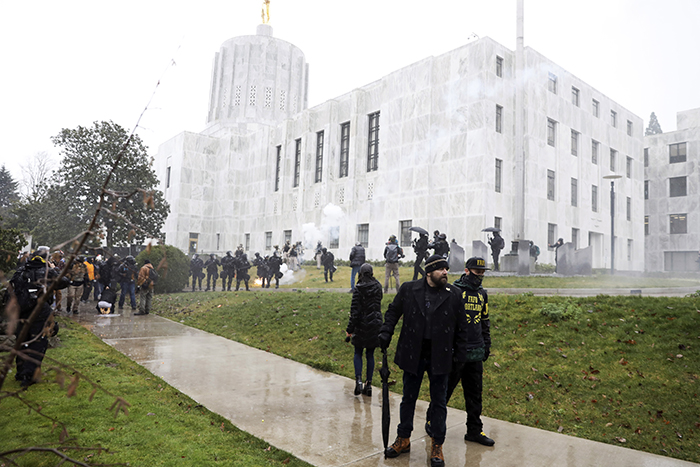 Supporters of President Donald Trump and Proud Boys clash with members of antifa during a protest of the certification of the presidential election results at the Oregon State Capitol in Salem, Oregon, on Wednesday, Jan. 6. (Photo by Brian Hayes/USA Today Network)

The complaint contains details of three YouTube videos uploaded over the preceding six months, in which Melby makes claims about Donald Trump and the forces Melby believes are arrayed against the president. A Hatewatch review of the videos reveals that Melby's beliefs align closely with the tenets of the QAnon movement. Those beliefs became more elaborate, and his grievances become sharper, following the November 2020 election, which he falsely believed to have been stolen from President Trump. The publication times of the videos also coincide with key dates in the local and national history of an increasingly militant pro-Trump protest movement.

In the first video, posted on July 25, 2020, Melby, who served in the U.S. Army and Oregon National Guard in Iraq, appeals to fellow veterans to join him in “hunting” those he characterizes as the “communists and Marxists” – those who had been protesting police violence in downtown Portland following George Floyd’s death at the hands of police in Minneapolis.

By then, protests in the city – which were focused on an area including the Hatfield building and the Multnomah County Justice Center – had become a national story, after the Trump administration dispatched federal law enforcement to the city over the objections of state and city leaders.

Melby explicitly supported those agents, whom he refers to as “troops,” and alleges protesters had published the private details of some of them, adding: “Those are things that myself as a soldier a career soldier would have killed you for. i'm not gonna sugarcoat it: i would have killed you.”

Melby alleges the protests are part of a “color revolution” taking place in the U.S. Partway through the video, he says: “It’s time to address the elephant in the room: QAnon. Yes, it is real. i have been working with them so yes it is real.”

He warns protesters: “We're going to begin hunting you tonight. Hunting you, because we hunt at night. We'll be dressed like you: we're doctors or nurses, we're business owners or dads or moms. You are not safe from us.”

Ironically, given his alleged actions last week, Melby concludes the video by saying, “Every single time you attack a government installation or a federal facility that is an act of treason, that is an act of sedition, and as an act of insurrection the oath that we took demands that there is a response.”

The second of Melby’s videos was posted to YouTube on Dec. 27, but recorded on Dec. 22, just one day after “Stop the Steal” demonstrators – including members of far-right groups such as the Proud Boys – had clashed with police as they forced their way into the Oregon State Legislature in Salem, prefiguring the riot just over two weeks later in Washington, D.C. In the video, he directly addresses Donald Trump, asking him to invoke the Insurrection Act and to employ veterans as part of a “militia of the people” that would carry out “actions against our domestic enemies.”

Melby’s video reflects the heated rhetoric then being employed by prominent far-right conspiracy theorists, social media influencers and, eventually, by the President himself. Throughout December, such Trump allies as QAnon-promoting attorneys Lin Wood and Sidney Powell; Ron Watkins, the son of 8chan/8kun proprietor Jim Watkins; and former National Security Adviser, Lt. Gen. Michael Flynn, whom Trump pardoned in November, had all prominently suggested that the president introduce martial law in order to force an election re-run. At a widely reported Dec. 19 meeting, Trump asked Flynn for more details about how this could be accomplished.

Also in the December video, Melby airs grievances against social media companies and politicians. He talks of “massive censorship by the media and social media” that has led to “my Facebook and Twitter accounts both [being] suspended.” Melby also alleges that during the Obama administration, “A purge occurred: many amazing field flag and company grade officers were pushed out of service against their will,” and claims that he himself was among those who left the military at this time “due to the disgust we felt that what was occurring to the men and women we respected that had led us in combat.”

Melby's final video was uploaded on Jan. 5 and filmed with the Oregon State House in Salem in the background. This was just two days before his alleged Portland attack, and a day before rioters forced their way into the U.S. Capitol in Washington, D.C., and Melby himself was arrested at a parallel protest at the Oregon Capitol. 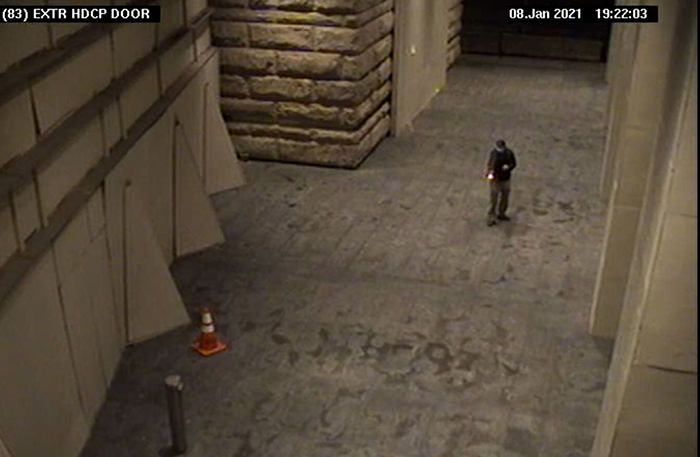 There, Melby was reportedly apprehended after he was found trying several doors in order to gain access to the Capitol building, and was charged with trespassing while in possession of a firearm.

By then, Oregon’s Capitol had again been the central focus of often-violent protests by pro-Trump extremists and far right groups. On Jan. 1, an illegal assembly was declared at the building after members of the Proud Boys hate group clashed with police.

In Melby’s video, billed as a statement on the election, he makes sweeping claims about an elaborate conspiracy to steal the November election from Donald Trump, in terms that frequently echo the President's own post-election allegations.

He says that “multiple state governments and federal agencies have committed treason against the United States,” citing sections of the U.S. criminal code that he claims these agencies have violated. He also names 40 public figures he claims are parties to these acts of treason, including Joe Biden, Portland Mayor Ted Wheeler, Facebook CEO Mark Zuckerberg, actor Tom Hanks and even Republicans such as Georgia Gov. Brian Kemp and Sen. Lindsey Graham of South Carolina. He says that all these people should be charged with treason for “subverting our national security.”

Melby connects the “CHOP” autonomous zone declared by Seattle protesters during that city’s George Floyd protest, which he calls an “antifa claim of sovereignty,” with alleged election fraud, falsely claiming that it is one of a number of “power centers” in the Pacific Northwest that have “allowed millions of counterfeit ballots to be printed distributed harvested throughout our republic.” He once again offers to help with the creation of a militia, and specifically to train recruits in “all relevant contemporary gunfighting skills.” He calls for unrestricted “Constitutional carry” gun laws, and rails against “unconstitutional mask mandates and keeping the American economy closed.”

Hatewatch has found additional evidence of Melby’s embrace of conspiracy thinking and armed militancy in Google’s caches of his posts on the “alt tech,” far right-friendly website Parler, where he was an active user before he was arrested, and before the site’s hosting was withdrawn by Amazon Web Services.

21 years ago when I was a young Private in The Army, we trained daily to kill communists. Then 9/11 happened and we killed Islamist extremists. In 2020 George Bush supported people with communist ideals. Do you see what happened? Do you see how we were sold out? For the last 19 years we have focused on killing Islamist extremists while we continued to be infiltrated by communists. Look here, not there. All enemies, foreign and domestic.

A day earlier, he wrote: “Proud Boys keeping ANTIFA looking the other way while the real killers are waiting in the shadows. Soon...”

On Jan. 6, the day of his first arrest and the Capitol riot, Melby wrote, “DNI RADCLIFF RELEASE YOUR REPORT ON 2020 ELECTION INTERFERENCE,” and earlier, “Declassify ALL the fraud perpetrated by the Democrat Party in the 2020 election!”

In the complaint addressing his alleged Jan. 8 attack on the Hatfield building, Melby is said to have been claiming to help the Federal Protective Services officers who apprehended him. When asked why he was there, the complaint alleges, Melby said, “because I am tired of all the shit you guys have to take.”

Melby's trial is scheduled to take place on March 16 and 17, in the same building he is accused of attacking.