Republican Bill Hagerty, who began representing Tennessee as a senator this year, quietly brought in an adviser named Julia Hahn, a former Trump official known for her racist writings and connections to the white nationalist movement.

Hagerty announced that he hired Hahn on Jan. 28, along with other figures who served under former President Trump. In October, Hatewatch reported on previously private emails Hahn sent to her former Breitbart News colleague Katie McHugh that revealed those connections to white identity extremists. Hahn’s writing at Breitbart News stands out for the degree to which it repeatedly and selectively portrays non-white people, immigrants and Muslims as posing a danger to white Americans.

“How many whites have been killed by blacks since Obama has been in office?” Hahn wrote to McHugh in an apparently unpublished July 2016 Breitbart News story pitch.

Hahn is not from Tennessee, but rather Beverly Hills, California. 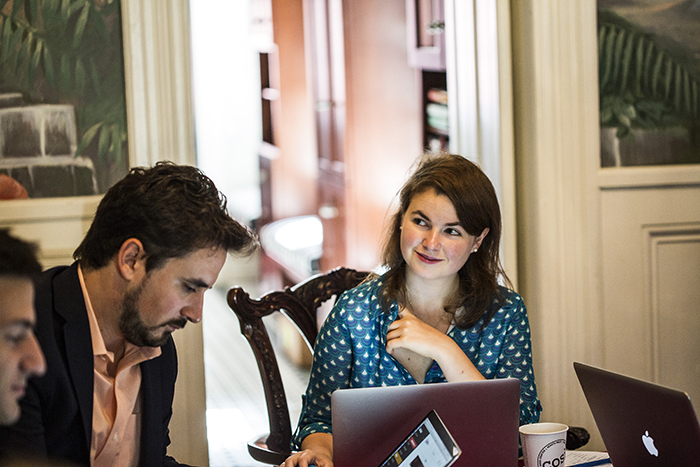 Julia Hahn at the “Breitbart Embassy” in 2015. (Photo by Jeremy Liebman)

Judd Deere, a former White House spokesperson, told Hatewatch in October that Hahn “rejects racism and hatred in all forms” but did not deny the authenticity of the emails that demonstrated her connection to white nationalist figures. Hagerty also hired Deere, the senator said in the same Jan. 28 announcement. Hatewatch reached out twice to Hagerty’s office for a comment on his hiring of Hahn and asked directly if his hiring of her suggested that he was sympathetic to the way she portrayed non-white people in her writing. On the second attempt, someone replied that Hatewatch should once again get in touch with Deere. Hatewatch asked for his current contact information, but the person did not provide it.

Other than Trump, the political figure Hahn most closely associated herself with before coming to work for Hagerty is white nationalist Paul Nehlen, who lost in landslide fashion in two consecutive campaigns to represent Wisconsin in the U.S. House. Hatewatch found that Hahn wrote a staggering 36 different posts for the highly trafficked Breitbart News hyping Nehlen’s candidacy, giving the obscure congressional challenger a national profile he would not have easily otherwise obtained.

After losing his second election in 2018, Nehlen began using his platform as a public figure to openly celebrate far-right terrorism. For example, a terrorist murdered 23 people and injured 23 others by opening fire in an El Paso, Texas, Walmart in August 2019, allegedly in the name of an anti-immigrant ideology. Nehlen posted a photo of a victim of the attack bleeding on the floor on the messaging app Telegram and wrote, “Pew pew pew to the dome.” He then reposted another person’s comment that read, “Clean up in aisle 4!” Neither Hahn nor Deere addressed her efforts to hype Nehlen’s candidacy in responding to Hatewatch’s request for comment back in October. Nehlen has also made comments wherein he fantasized about springing a racist and antisemitic mass shooter from prison.

Hagerty’s office issued a press release on Jan. 2, calling Joe Biden’s victory in the 2020 election “tainted” and adding that he and fellow Tennessee Sen. Marsha Blackburn would vote against certifying the Electoral College on Jan. 6. 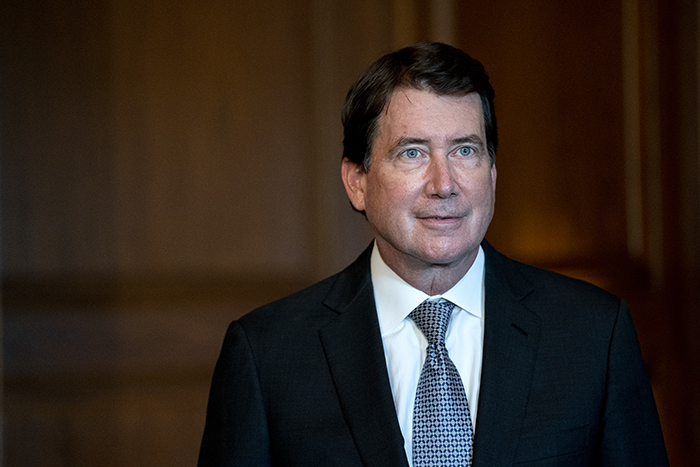 “Tennesseans elected us as their United States Senators to represent their views and values in Washington and to always fight for them, which is why we have concluded without any reservation that we will stand against tainted electoral results from the recent Presidential election,” the press release stated.

A group of Trump supporters stormed the Capitol building in an insurrection attempt on Jan. 6, motivated largely by the false belief that Trump won the election and Democrats stole it from him. The insurrection attempt left five people dead and made the growing threat of far-right extremism in America an international news story. Hatewatch reached out to Hagerty for clarification about what he meant by “tainted,” and whether his new adviser Hahn also thought the same thing about the results of the 2020 election. Hagerty reversed course after the violence and voted to certify Biden’s victory.

Hahn is connected to the white nationalist non-profit VDARE, Hatewatch found while reviewing her emails. VDARE has published apologia regarding the ideologies espoused by far-right terrorists and has defended the white supremacist “Unite the Right” rally staged in Charlottesville, Virginia, in August 2017. Hahn called VDARE founder Peter Brimelow by his first name in her emails to McHugh, suggesting a degree of familiarity with him.

“Of course she’s been ‘tied to me,’ because the CultMarx thug groups were desperate to smear Trump (and now, apparently, Hagerty). They just lie, don’t you realize that?” Brimelow told the publication Nashville Scene on Jan. 29 about Hatewatch's reporting. “Like many of us in [sic] immigration patriot catacomb, I had a couple of minimal contacts with Julia Hahn when she was working for Ingraham and researching immigration. I don’t think anything since 2015-16.”

When Hatewatch reached out to Brimelow about Hahn for the October story, he asked the reporter to unblock him on Twitter.

Before joining the Trump White House as an aide, Hahn also attended a writer’s workshop hosted by The Social Contract Press, a white nationalist hate group, the emails McHugh leaked to Hatewatch revealed. McHugh’s leaked emails also showed Hahn met with white nationalist Scott Greer prior to joining the Trump White House as an aide. The Daily Caller said it would no longer publish Greer after news surfaced that he wrote for white nationalist Richard Spencer’s publication Radix Journal under a pseudonym. Hahn also collaborated with staff at the anti-immigrant hate group Center for Immigration Studies to write articles portraying non-white immigrants in a negative light, the emails showed.