Less than two months after calling for insurrectionists to “break down the barriers and disregard the police” outside the U.S. Capitol building, white nationalists and other far-right extremists gathered in Florida for a conference featuring current and former U.S. congressmen.

Rep. Paul Gosar, R-Ariz., and former congressman Steve King, R-Iowa, addressed a crowd of far-right extremists on Feb. 26 as part of the second annual installment of the America First Political Action Conference (AFPAC) at a hotel in Orlando, Florida. The event, organized by white nationalist streamer Nicholas Fuentes, took place amid increased scrutiny from law enforcement as a result of the Jan. 6 insurrection at the U.S. Capitol, as well as allegations from one of Fuentes’ former allies that he is currently under federal investigation.

Speakers, including Fuentes, drew heavily on extreme anti-immigrant rhetoric while hyping up tropes and conspiracy theories associated with the white nationalist movement. Despite the presence of Gosar and King – both longtime Republican lawmakers – attendees also chanted, “Destroy the GOP.” 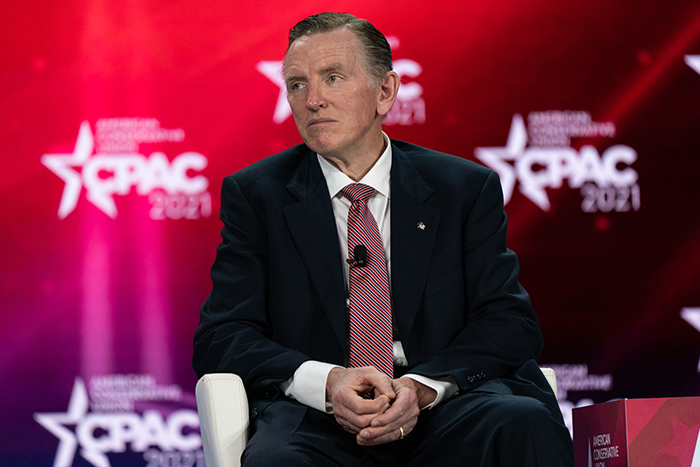 Rep. Paul Gosar, a Republican from Arizona, listens during a panel discussion at the Conservative Political Action Conference (CPAC) in Orlando, Florida, on Feb. 27. (Photo by Elijah Nouvelage/Bloomberg via Getty Images)

“White people founded this country. This country wouldn’t exist without white people. And white people are done being bullied,” Fuentes said in his speech, which took place immediately after Gosar’s.

“We can restore this country. We can do it with our babies, and we can do it with our values,” former Rep. King told a cheering crowd Friday evening. His statement was an apparent nod to his 2017 comments that were widely interpreted as an endorsement of white nationalist ideology. 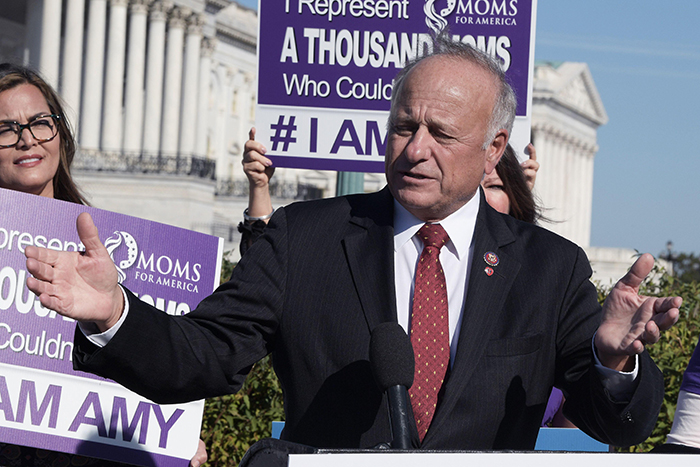 The event was held alongside the annual Conservative Political Action Conference (CPAC), where Gosar also spoke on Saturday, Feb. 27. Though the lawmaker tried to put some distance between himself and Fuentes, telling the audience during his scheduled CPAC panel the next day that he denounced “white racism,” his presence represents an ongoing effort on Fuentes’ part to push his wing of the white nationalist movement further into the mainstream.

Fuentes and supporters of his racist “America First” movement were present at numerous Stop the Steal events throughout late 2020, as well as at the Capitol insurrection. As Hatewatch previously reported, Fuentes was spotted outside of the Capitol during the Jan. 6 insurrection, where he told insurrectionists to “break down the barriers and disregard the police.” He later said that Trump supporters should feel “inspired” by the events of Jan. 6 – a sentiment that Fuentes echoed again Friday evening.

“I saw hundreds of thousands of patriots surrounding the U.S. Capitol building, and I saw the police retreating, and we heard that the politicians voting on the fraudulent election had scurried in their underground tunnels away from the Capitol. I said to myself, ‘This is awesome,’” Fuentes said in his AFPAC speech.

In the run-up to Jan. 6, Fuentes also raised the specter of killing state lawmakers, particularly Republicans. In a Jan. 4 stream of his show, which was aired during Trump’s impeachment hearings, Fuentes asked regarding GOP legislators: “What can you and I do to a state legislator besides kill them? Although we should not do that. I am not advising that, but what else can you do, right? Nothing.”

The Feb. 26 event also marked one of the first to be organized under the auspices of Fuentes’ new nonprofit organization, the America First Foundation, which was registered in mid-2020.

Hatewatch reached out to Patrick Casey, a former close associate of Fuentes, as well as AFPAC speakers Fuentes, Gosar, King, and Vincent James for comment, but did not receive a response.

Vincent James Foxx of the Red Elephants, who spoke at the conference, responded to Hatewatch with a racist diatribe pushing a longtime white supremacist myth that Black Americans are wantonly attacking white people.

AFPAC speakers took aim at the institutional GOP and the more mainstream pro-Trump movement, while raising the possibility of challenging Republican candidates in 2022. At least one called to actively “destroy the GOP.”

Vincent James Foxx of the Red Elephants, who appeared alongside Fuentes at the Jan. 6 riot, blasted mainstream Republicans for failing to overturn President Joe Biden’s win.

“When we showed up in Washington, D.C., in Atlanta, and Arizona for the Stop the Steal rallies, we promised that because of these betrayals, we were going to destroy the GOP,” Foxx said amid cheers from the crowd.

“People like us are going to primary every last spineless and traitorous member of the Republican Party in 2022,” he noted later. “We are going to completely transform the party . . . and out of its ashes will finally ride a true right-wing, reactionary force.”

Fuentes presented these electoral efforts as an extension of the anti-democratic Stop the Steal movement as well.

“I said that it doesn’t stop with Stop the Steal. That if Joe Biden is inaugurated, we don’t stop after January 20th; we just shift focus. And everybody that was mobilizing and rallying to ‘Stop the Steal’ on January 21st, 2021, was going to shift gears and instead move to primary every last RINO in 2022. And when I said that I meant it. We’re going to do that,” he told the crowd. “RINO,” in this case, stands for “Republican in Name Only” – a pejorative term used by some on the right, particularly the far right, to describe members of the Republican Party who are not deemed sufficiently conservative. 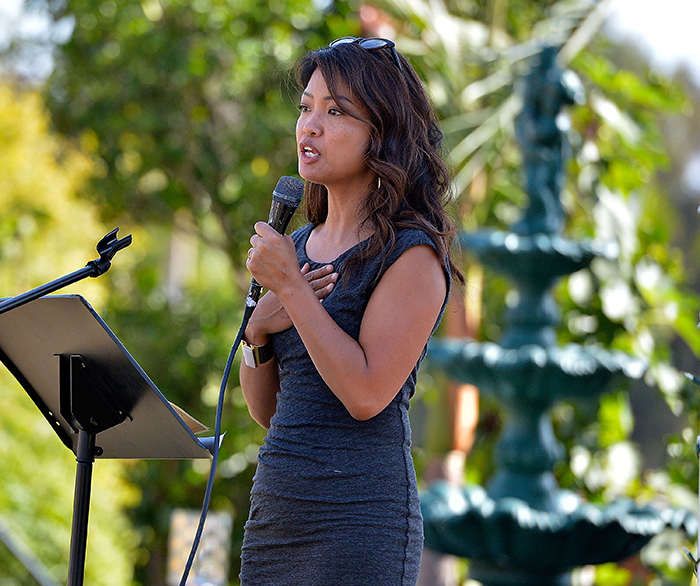 At least two former congressional candidates amenable to the racist, anti-immigrant platform pushed by Fuentes were present at AFPAC. Lauren Witzke, a former candidate for the U.S. Senate in Delaware, posted a photo of herself on Twitter with AFPAC speaker Michelle Malkin, calling it an “incredible event.” During her campaign, Witzke gave an interview to the white nationalist site VDARE and praised the Proud Boys for providing “free security” at one of her rallies. Former U.S. House candidate Laura Loomer, who once described herself as a “proud Islamophobe,” also attended. In a post on the encrypted messaging app Telegram, Loomer noted: “If you’re a Republican who calls yourself ‘America First’ who attended CPAC and you’re too scared to attend AFPAC, you’re not really America First, and you’re definitely not pro-free speech.”

A white nationalist gathering amid increased scrutiny from law enforcement

While Fuentes announced in mid-December that AFPAC would take place despite the COVID-19 pandemic, registration information was not made public until a few weeks after the Capitol siege. The decision to continue with the event resulted in a slew of allegations involving Fuentes’ finances.

Details for AFPAC were made public on Feb. 8, about a month after insurrectionists attacked the Capitol. In a livestream, Fuentes sought to assuage some of the fears around throwing an in-person conference at a time of increased scrutiny from law enforcement. In addition to promising vague measures to prevent against infiltration by journalists, activists or law enforcement, he said of AFPAC: “It’s going to be … the most secure event … in world history.” 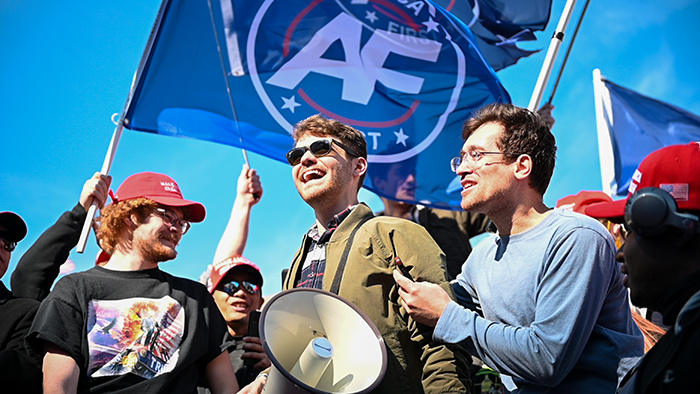 Nick Fuentes speaks to his followers in Washington, D.C., on Nov. 14, 2020. (Photo by Zach D Roberts/NurPhoto via Getty Images)

Despite Fuentes’ attempted assurances, concerns over holding an in-person event in the midst of numerous ongoing federal investigations tied to the insurrection at the Capitol resulted in a very public fissure between two wings of the white nationalist “America First” movement. On Feb. 11, Patrick Casey, a longtime associate of Fuentes and one of the key organizers behind last year’s AFPAC, publicly distanced himself from the event, calling it a “bad idea for a million reasons.” In particular, Casey cited an FBI probe into a large bitcoin donation made to Fuentes, Casey, the Daily Stormer, VDARE and others by a now-deceased French programmer.

Casey leveled numerous allegations about Fuentes on his stream, including that he produced a “cult-like atmosphere” within the movement. In particular, Casey posited that Fuentes’ bank accounts had been frozen, and that he was traveling to Florida under the suspicion that he had been added to a federal no-fly list. However, he did so without providing evidence.

“This is serious. The FBI is cracking down like you’ve never seen before. Unprecedented, right?” Casey told viewers.

“He’s not going to tell you that. He’s going to say, ‘Come to my event. If you’re really concerned, then don’t go.’ But he’s not going to make you aware of the severity of the situation behind the scenes,” he said later in the same stream.

Fuentes denied both charges in the days to come on multiple far-right livestreams.

“At the end of the day … he accused it of being a cult,” Fuentes said of Casey on a Feb. 12 livestream with Matt Evans, who goes by the moniker "Beardson Beardly” online.

“I have ironically described this as a cult, and I don’t think cults are necessarily a bad thing,” Fuentes said. “I think you need, actually, a sort of cult-like . . . mentality. You know, you think about other cults, and it’s like, you know, cults are really the only place where there’s … loyalty, where you’re protected from the entire world attacking you, right?”

“Unfollow people who countersignal Nick” said a Discord user on Feb. 13, in a trove of chats posted by the website LeftCoastRightWatch, referring to the spat between Casey and Fuentes.

Fuentes’ foundation has been classified as a 501(c)4, per public records. 501(c)4s are nonprofits, but they are not required to disclose their donors. As John Dunbar of the investigative journalism outlet the Center for Public Integrity has noted, this has made them “the vehicle of choice for so-called ‘dark money’ groups.”

Public records indicate that Fuentes attempted to register the America First Foundation in Florida first on July 7, 2020. This initial application was rejected. While there is no reason listed on Florida’s Division of Corporations website, the address associated with the filing lists a P.O. box associated with “Western Springs, FL,” even though the zip code matches that of Western Springs, Illinois – a suburb of Chicago.

Hatewatch was not able to identify the foundation as registered in Illinois with either the Secretary of State or Attorney General’s office. Illinois law requires that nonprofit organizations register with the state unless they can be declared exempt. Hatewatch reached out to a spokesperson at the Illinois secretary of state’s office but had not received a comment by press time. However, a conversation with members of the secretary of state's office suggested that they were looking into whether the organization needed to register in that state.

Ten days later, America First Foundation submitted an application to the Florida Department of Agriculture and Consumer Services, which handles registration for charities that intend to operate in the state. According to a listing on the department’s website, the application was submitted on July 17, 2020, and it denotes the organization as having a 501(c)4 filing status. The company’s business address is tied to a location in Dover, Delaware. Hatewatch was able to match the address to a legal services group called A Registered Agent, Inc., which purports to register new businesses in Delaware and related services.

Another public records search found that the foundation had registered with the Oklahoma Secretary of State on July 24, 2020. Its mailing address was listed as Western Springs, Illinois.

Registration information for the America First Foundation filed with the Florida Department of Agriculture and Consumer Services offers little insight into the foundation’s activities. Fuentes is listed as the sole proprietor, and no other officers or directors are identified on the form. Likewise, the foundation’s budget on the application is completely empty.

However, reporting from Hatewatch in November 2020 estimated that Fuentes was earning a six-figure salary from the streaming platform DLive alone. Property records from Cook County reveal that he recently purchased a home in the Chicago area for a little under $400,000, including a nearly $100,000 down payment.

What role Fuentes’ nonprofit plays in the future of his racist movement, however, remains to be seen.