Since the election of President Joe Biden, a number of state legislators have proposed so-called “Second Amendment sanctuary” legislation to declare their states immune from federal gun-safety laws they consider unconstitutional. Such resolutions are legally problematic and threaten to override the very democratic systems upon which the country was built. 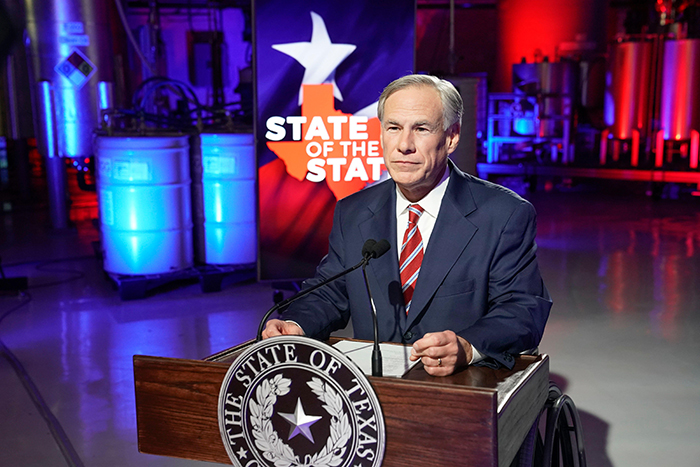 Meigs County, Ohio, passed a resolution stating it will not authorize or expend county funds “for the purpose of enforcing illegal and or unconstitutional laws or ordinances that seek to limit a law-abiding citizen’s right to keep and bear arms.” This language is typical to “sanctuary” proposals.

Other resolutions extend even further, proposing punishments for anyone who enforces gun laws deemed to infringe Second Amendment rights. Buffalo Township, Pennsylvania, passed a 2A sanctuary law that punishes officials who do not adhere to the ordinance “with a maximum fine of six hundred ($600.00) dollars, imprisonment for not more than ten (10) days, or both.”

This wave of proposals is the direct result of hysteria around potential new federal and state gun laws and age-old conspiracies about Democrats’ desire to confiscate guns. These are the same fears antigovernment extremists have used to fuel and unify their movement for decades. Gun laws typically targeted by 2A resolutions include red flag laws, universal gun background checks and bans on assault-style weapons. These laws have wide support from the general public and have been passed in many states, which is why antigovernment extremists and gun rights activists see them as a threat.

Second Amendment sanctuaries are not a new phenomenon. In 2013, municipalities in 38 states passed bills to “protect” against any federal gun legislation proposed by the Obama administration in the aftermath of the mass shooting at Sandy Hook Elementary that left 27 people dead, including 20 children. In addition to local municipalities, a handful of states also passed state-level Second Amendment sanctuary laws around that time, although some have been struck down in court.

A resurgence in 2A sanctuary resolutions followed the school shooting at Parkland High School on Feb. 14, 2018. Parkland students immediately began working to reform existing gun laws in the hopes of preventing future shootings. Some gun rights advocates, including extremist Congresswoman Marjorie Taylor Greene and the Utah Gun Exchange, mobilized against these efforts. Others reintroduced the concept of 2A sanctuaries.

Monroe County, Illinois, became the first jurisdiction to pass a Second Amendment resolution using the term “sanctuary,” a term co-opted from the immigration “sanctuary city” movement, on May 7, 2018. Since then, hundreds of jurisdictions have followed suit. Some sheriffs, many of whom align themselves with the antigovernment “Constitutional Sheriffs” movement, have made public statements asserting their unwillingness to enforce gun laws they believe violate the Second Amendment.

Gun Owners of America, an antigovernment extremist group that campaigns and convinces localities to pass this type of legislation, claims that as of Jan. 2021 more than 1,165 municipalities have passed 2A sanctuary resolutions.

Since the beginning of the Biden administration, we have seen a renewed effort by gun rights activists to stoke fears around potential gun-safety legislation and pass additional Second Amendment sanctuary bills.

The antigovernment movement has mobilized around Second Amendment sanctuary resolutions during the past several years, with the goal of overriding and dismissing gun legislation they perceive as unconstitutional. Their aim is to push back against any gun legislation that could interfere with the Second Amendment, a right they incorrectly believe entitles them to unfettered access to guns. 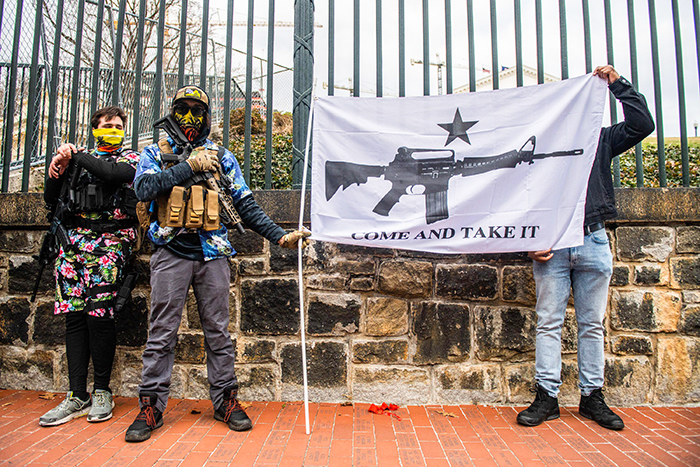 Members of the Last Sons of Liberty, a Boogaloo group, attend a Second Amendment rally during Lobby Day at the Virginia State Capitol on Jan. 18 in Richmond, Virginia. (Photo by Chris Tuite/ImageSPACE/Alamy News)

Antigovernment extremists often boast that the Second Amendment is the right that ensures the rest, claiming that without guns citizens cannot keep a tyrannical government in check. Gun rights are a unifying issue for the antigovernment extremist movement, from the Boogaloo to militias to Constitutional Sheriffs.

The push to impose “sanctuary” and similar legislation is not the result of an organic, grassroots movement but rather a well-funded campaign marketed by the gun lobby and supported by antigovernment extremist groups such as Gun Owners of America, Oath Keepers and the Constitutional Sheriffs and Peace Officers Association (CSPOA). Joe Berlyak, owner of antigovernment extremist outlet Patriot Watch Media, led such an initiative in Stark County, Ohio.

This movement evolved from the “county supremacy” or “posse comitatus” movement, which translates to “power of the county.” The Posse Comitatus movement – which has no legal basis – pushed the idea that sheriffs were the highest law enforcement official in the land, had the authority to determine the constitutionality of laws and the power to call up male citizens ages 15 to 45 to serve as part of the sheriff’s posse, known as the posse comitatus. This lawless idea became the basis for the modern day “constitutional sheriffs” and militia movements. 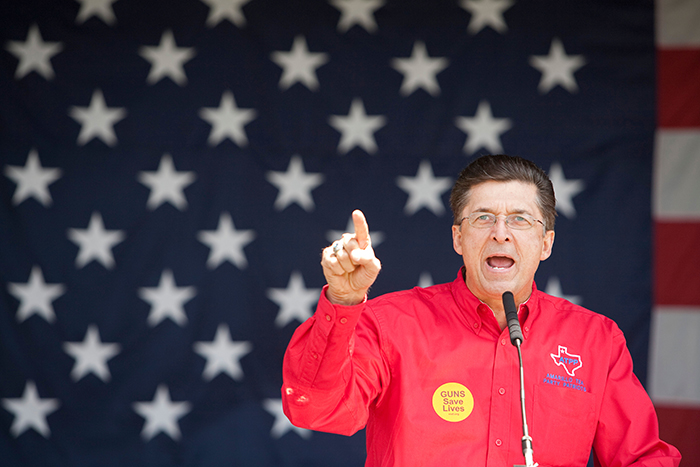 Richard Mack, founder of the CSPOA, created his organization with the purpose of spreading the county supremacy movement and persuading county sheriffs to sign agreements to uphold citizens’ right to keep and bear arms, regardless of state and federal laws dictating otherwise.

To date, hundreds of Constitutional Sheriffs have pledged to “uphold” the Second Amendment, and have made public statements refusing to enforce gun laws in their county.

Even though some 2A sanctuary proposals claim to prohibit enforcement of state or federal gun laws, local jurisdictions do not have the power to override these laws. Legislation that tries to do so is illegal and unconstitutional.

The Supremacy Clause of the U.S. Constitution clearly establishes that federal law is “supreme” to state law. In the event that state law conflicts with federal law, the federal law is the ultimate authority. States have enshrined similar supremacy clauses in their constitutions that make state law supreme over local law, and this includes gun laws.

Hatewatch staff spoke to legal experts at Everytown for Gun Safety and Georgetown University Law Center’s Institute for Constitutional Advocacy and Protection to better understand the legality of 2A sanctuary resolutions.

These proposals vary widely from jurisdiction to jurisdiction in terms of what they actually state, some with more or less legal effect. Nonetheless, they generally fall into one of three categories:

1. Proposals that express sentiment or declare an intent to protect and support citizens’ Second Amendment rights. These types of resolutions make up the vast majority of 2A sanctuary proposals and are meant to send a message to state legislatures and also appease 2A proponents in their jurisdictions.

2. Proposals that state the locality will not “authorize or appropriate” any funds toward the enforcement of unconstitutional gun laws. These proposals often are vague and do not specify which gun laws are unconstitutional.

Second Amendment sanctuary policies are problematic because they attempt to impede and prevent the enforcement of state and federal gun laws. Some municipalities have even attempted to punish officials for enforcing state law, which is illegal. In fact, state officials take an oath of office to uphold and enforce the state constitution and its laws. By refusing to follow state gun laws, officials not only violate their oaths of office but the state constitution as well. This is ironic because 2A sanctuary supporters, including some sheriffs, often claim they are doing so to “defend” the Constitution. In reality, they are violating it by refusing to enforce laws that were legally enacted by their state legislatures.

It is also illegal for states and localities to prevent or impede federal agents from enforcing federal laws they are tasked with enforcing. Despite Constitutional Sheriffs’ belief that they are the top law enforcement officials in their jurisdictions, they cannot stop federal officials from doing their jobs.

The appropriate process for challenging a law’s constitutionality, including a gun law, is to challenge it through the court system. The U.S. system of checks and balances and separation of powers bestows elected legislators with the power of enacting laws, law enforcement officials with enforcing laws, and courts with deciding the constitutionality of laws. Second Amendment sanctuaries are an attempt to circumvent these constitutional processes.

The 2A sanctuary movement intentionally has misappropriated the “sanctuary” language of immigration sanctuary cities in order to create a false equivalency between the two movements. The similarities between the two are in language only; they couldn’t be more different in terms of legality.

Dangers of 2A sanctuaries

Second amendment sanctuaries have harmful real-world effects in that they:

• Undermine the rule of law.

• Purposely mislead the public into thinking local government and sheriffs have the power to decide what laws are unconstitutional.

• Wrongly suggest that local officials can and should take the law into their own hands and refuse to enforce laws they believe are unconstitutional.

• Circumvent the democratic system and the role of courts in determining the constitutionality of laws.

• Confuse law enforcement about what gun laws they should and should not enforce.

• Confuse citizens into thinking they are immune and that certain gun laws do not apply to them.

• May fuel citizen uprisings and potential violence if citizens believe their Second Amendment rights are being violated.

All of this sets a dangerous precedent and encourages lawlessness.

Mary McCord, a former acting assistant attorney general for national security and current legal director of Georgetown University Law Center’s Institute for Constitutional Advocacy and Protection, warned in a Washington Post article that the 2A sanctuary movement has “spurred extremists who want to stand up local militias to engage in armed rebellion against the state — action that isn’t just dangerous but that also runs counter to the Constitution,” something that sounds similar to what we witnessed at the U.S. Capitol on Jan 6.

Since January 2020, the Oath Keepers militia, one of the most prominent groups involved in the Jan 6 insurrection, has been actively lobbying sheriffs to publicly reject and refuse to enforce future gun laws, and to form posses to advance this goal.

In effect, 2A sanctuaries, if allowed, would create a nation where laws have no real meaning and where individuals and localities are given the power to interpret and apply the law however they wish – a concept that is wholly unconstitutional and anti-democratic.