One America News Network (OANN) correspondent Jack Posobiec tweeted 28 times over a span of ten months links to a website the U.S. government says is backed by Russian intelligence.

Posobiec repeatedly linked on Twitter to the obscure website “SouthFront,” which the U.S. Department of the Treasury named on April 15 in a statement explaining its enactment of sanctions on the Russian government, Hatewatch found. SouthFront, in turn, made posts promoting Posobiec. Southfront also cited Posobiec’s tweets in their posts, as they did in February when announcing that Senate Republicans acquitted President Trump on charges related to his role in the Jan. 6 insurrection. Posobiec has used Twitter to promote Russian intelligence-backed propaganda before, as when he served as a central figure in spreading a hack of Emmanuel Macron’s emails in May 2017, as Hatewatch has previously reported. 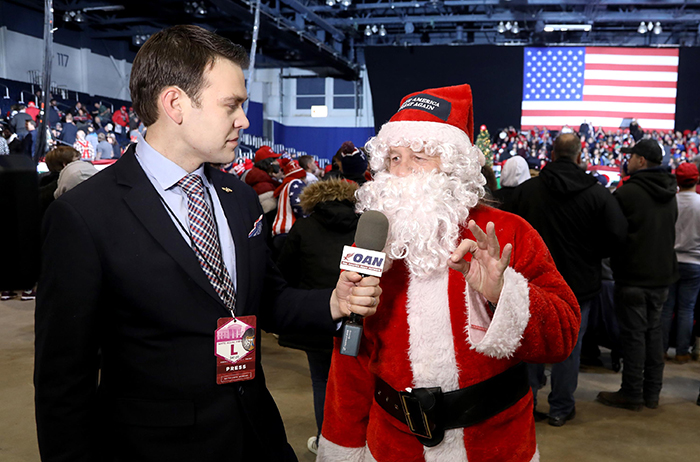 Jack Posobiec of One America News interviews a Santa Claus not far from the stage where President Donald Trump appeared for a rally at Kellogg Arena in Battle Creek, Michigan, on Dec. 18, 2019. Photo by Eric Seals/Detroit Free Press/USA Today Network

The Department of the Treasury put in place those sanctions in response to attempts to “influence the 2020 U.S. presidential election at the direction of the leadership of the Russian Government,” the statement noted. The government described the website Posobiec shared dozens of times as being operated by Russia’s Federal Security Service (FSB) in an attempt to appeal to Western audiences:

SouthFront is an online disinformation site registered in Russia that receives taskings from the FSB. It attempts to appeal to military enthusiasts, veterans, and conspiracy theorists, all while going to great lengths to hide its connections to Russian intelligence. In the aftermath of the 2020 U.S. presidential election, SouthFront sought to promote perceptions of voter fraud by publishing content alleging that such activity took place during the 2020 U.S. presidential election cycle.

Jack Posobiec tweeted a link to a SouthFront article about Libya in February 2020.

Posobiec shared to Twitter the 28 links to SouthFront from November 2019 to August 2020, all while working for the low-standard news network OANN, Hatewatch found. The OANN correspondent shared SouthFront links related to such subjects as Iran, Syria, Libya and China. (The web traffic analysis company Alexa suggests that SouthFront.org pulls most of its traffic from posts about Syria and its surrounding region.) Posobiec also shared SouthFront links focused on the COVID-19 pandemic and at least one post on the site that mocked concerns about Russian disinformation. Posobiec frequently deletes posts with disinformation or hateful language from Twitter after they have gone viral, as he did in 2017 after promoting on that site a neo-fascist Polish political movement that in the 1930s bombed Jewish homes.

Twitter “verified” Posobiec’s account in April 2017. Verification on Twitter gives media figures and celebrities a blue check next to their names on the site, which critics say awards far-right extremists like Posobiec an air of authority they would not otherwise be able to obtain. Hatewatch found only scattered examples of “verified” Twitter users promoting SouthFront outside of Posobiec. Posobiec, who has over 1 million Twitter followers, also appeared to produce some of the most engagement SouthFront has received on the site, based upon a review of tweets linking to their content. Twitter now issues a warning when users click on SouthFront-related content linked on their site, describing the material as being potentially “unsafe.”

Jack Posobiec tweeted a link to a SouthFront article about Russian hacking in January 2020.

“No day without shaping the history! Big Bad SouthFront is once again threatening interests of the leadership of the world’s sole superpower,” SouthFront wrote in a post published April 15.