Antigovernment militia groups in Arizona appear to be working in tandem with some Border Patrol agents in Pima County, based on a Hatewatch review of social media.

As militias on the border have become more brazen in recent months, it appears some Border Patrol agents have turned a blind eye to their activities. Hatewatch has reviewed several videos of Border Patrol agents interacting with these border militia members, in some cases even appearing to have established friendly relationships.

Officials from U.S. Customs and Border Protection and the Pima County Sheriff’s Department did not return Hatewatch’s repeated requests for comment. 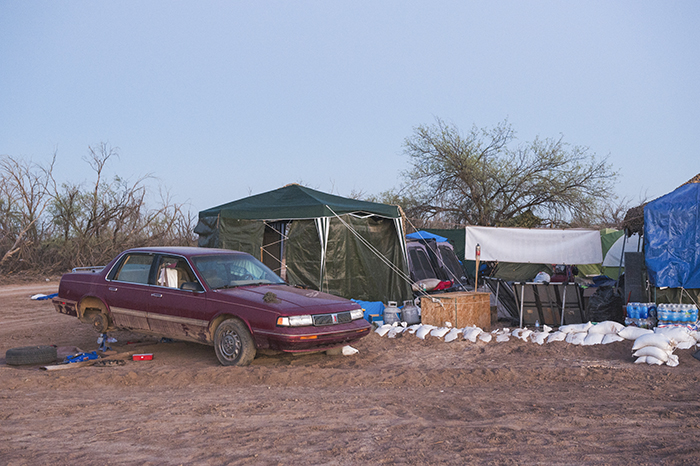 The Veterans on Patrol camp has hosted dozens of volunteers since it started in June 2018. (Photo by Andrew Cullen)

The group, Veterans on Patrol (VOP), a Southern Poverty Law Center (SPLC) designated antigovernment militia group, has documented the militia coalition’s activities on platforms such as Telegram, Instagram, YouTube and Facebook, detailing detainments in the region.

In messages posted to VOP’s telegram channel, vigilante “operations” show how VOP, along with other groups such as AZ Desert Guardians and United People of America, have stopped, interrogated and siphoned migrants into the hands of Border Patrol agents. In total, Hatewatch identified at least 15 instances where border militia groups “intercepted” migrants in Pima County, Arizona. Facebook images of the group’s activities make it clear agents have been aware of the militia presence in the region since at least 2019.

These groups have a history of engaging in conspiracy-fueled missions that aim to portray migrants as cartel members and child predators. Although VOP appears to have been around since at least 2015, they’ve veered from their initial mission of providing services to homeless veterans and have shifted their focus to intercepting migrants from Central and South America. In 2021, the current Veterans on Patrol organization appears to have very little do with veteran affairs, and according to the group’s website, their new priority is to protect “America’s children by disrupting Child traffickers along the southern Arizonan Border!” 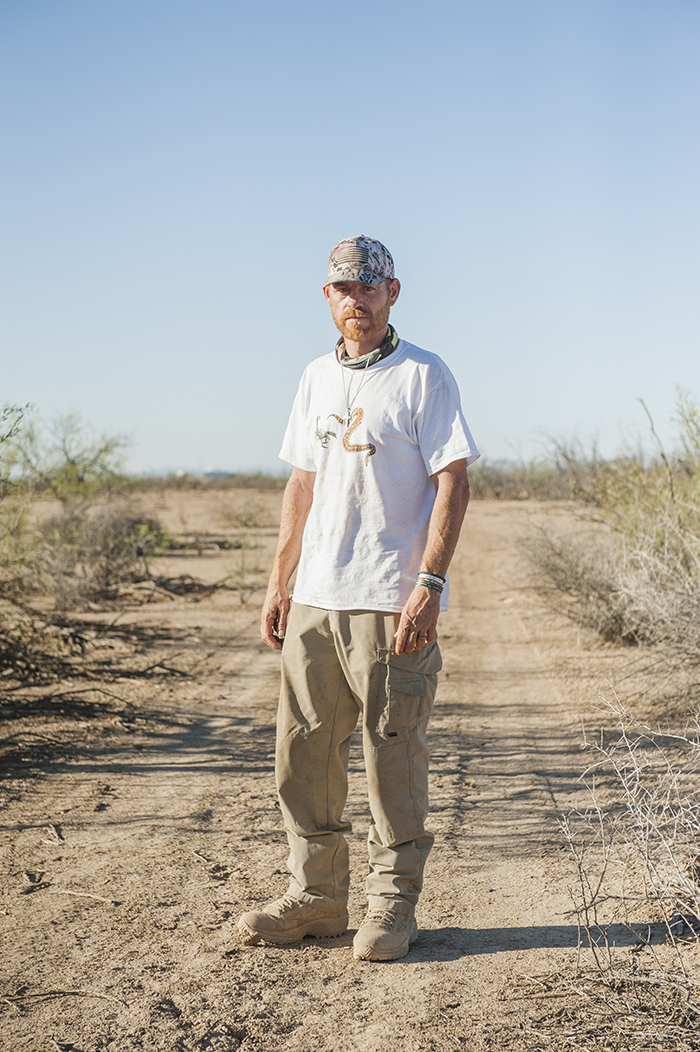 Around 2018, the group began to draw inspiration from the QAnon movement, frequently sharing posts with the hashtag #WWG1WGA, translating to “where we go one, we go all,” a popular QAnon motto. The group’s leader, Michael “Lewis Arthur” Meyer, has a long history of pushing debunked claims that “child sex camps” are being operated by cartels in the Arizona desert. Other conspiracies include the idea that George Soros and the Clinton family are responsible for the wave of migrants.

Meyer’s group isn’t the only militia operating in the region. Alongside VOP, the group AZ Desert Guardians appears to be engaging in coordinated efforts to stop migrants. AZ Desert Guardians, a sister organization to VOP led by Rebecca “Becky” Ferland, has been working with Meyer to detain migrants since the start of the year. In one video shared by both groups in February, Ferland can be heard interrogating two migrants in the desert and then searching through their belongings. The VOP Telegram channel swiftly uploaded the video with the caption “Great job Becky and Ken.” AZ Desert Guardians have been present in the area since at least 2019.

VOP and AZ Desert Guardians have embraced QAnon and far-right conspiracy theories about “child sex camps,” “rape trees” and “jihadists” supposedly being found in the Arizona desert. The two leaders frequently credit these conspiracies with inspiring them to engage in border operations that initially began with searches for cartel camps and slowly evolved into detaining migrants.

Today, the VOP Telegram channel shares daily content from its members, as well as content from AZ Desert Guardians and a third group going by the name “United People of America.” Their media typically shows detained migrants, sometimes dazed or in distress, being questioned by the vigilante groups before being handed over to Border Patrol agents. In a video uploaded on June 8 calling for volunteers – and shot in front of a Border Patrol Enforcement Zone – Meyer describes his role as the leader of what he calls the “border coalition.”

According to an unidentified Border Patrol agent that appears in one of VOP’s videos, agents are typically discouraged from engaging with media. Regardless, Meyer and his group have published livestreams and recordings of interactions with at least eight different agents. In at least five of those instances, the individuals were unaware they were being recorded, or were lied to and told cameras were not recording.

In a video posted to Facebook in May, Meyer and a second militia member traveled to a border patrol immigration checkpoint to seek out an unidentified border patrol agent. Early in the video, Meyer states the meeting was initiated to drop off VOP drone footage of the area, suggesting that federal agents are receiving, whether by request or not, intelligence from militia members. The interaction was recorded through a dashcam, and it appears the agent was unaware that the recording was taking place. Through the course of their conversation, the unidentified agent greets the militia members with a high five before praising the men for being “effective and a lot of fun.”

Meyer can be heard telling the agent that VOP has already been warned to “stay in the box” by another officer, referring to the idea that VOP members have been told to stay within a certain area. It’s at that point that the agent whispers, saying, “I don’t care what you do, you’re talking to me.” The men proceed to laugh and soon part ways. As Meyer drives away, a second VOP member asks Meyer if he got the agent’s number, to which Meyer states that he already has the Border Patrol agent’s private number because “He’s one of my people, don’t worry about it.”

In eight of the 15 instances where militias intercepted migrants, Border Patrol agents appear to have responded to calls from Meyer and his allies. The nature of their relationship appears to be one where militia members have made it their job to intercept, detain and eventually call on Border Patrol to apprehend intercepted migrants. In the remaining seven instances, social media posts failed to show the exact outcome of the militia detainments.

In a separate video uploaded on June 1, two unidentified militia members claimed they met with Border Patrol and were directed to hotspots where migrants could be easily intercepted. Hatewatch was not able to verify the validity of this claim, but what is clear is that on at least eight different occasions, militias have handed over migrants to Border Patrol agents in Arizona.

The militia activity becomes even murkier when studying the personal belongings, presumably from migrants, that have been photographed and shared on social media. These items include foreign government identifications, cell phones, phone numbers and currency. According to the VOP website, “Lewis and his team mainly acquire contraband discarded and rarely by force.”

Videos and posts about their border operations, available on most social media platforms, have allowed these militias to flourish and build a sizeable following. The operations have also resulted in a constant stream of donations from supporters. According to Telegram posts, donated items include prepaid gift cards, bottled water, shoes, QAnon stickers and even electronic surveillance devices.

On top of images showing items that the group has amassed, highly disturbing images of target practice have been reshared by the VOP Telegram account. The images and videos originating from an account under the name United People of America have shown militia members shooting up a human-shaped cardboard cutout spray-painted with the name “Juan.” That same account also shared an image of a militia member dressed in attire resembling an army combat uniform, while a migrant appears to lay against an unmarked truck. Members of the three main groups, VOP, AZ Desert Guardians and United People of America, typically appear in social media posts donning military style outfits while engaging in border activities.

According to posts uploaded to Telegram in June, the coalition continues to put out calls to action while also sharing tactical training videos, even going as far as to state that “new volunteers must pass the tactical training course to carry firearms in the field.”

According to the Institute for Constitutional Advocacy and Protection (ICAP), an institute based out of Georgetown Law Center focused on defending constitutional rights through litigation and constitutional scholarship, it is currently illegal to act as a private militia in the state of Arizona. An ICAP fact sheet for the state reports that the Arizona Constitution article II, section 20, “forbids private military units from operating outside state authority, providing that ‘the military shall be in strict subordination to the civil power.’”

The fact sheet goes on to point to Arizona Revised Statutes section 26-123 as having established that it is a felony for a group of people to form a private militia. Additionally, Arizona Revised Statutes section 26-170 establishes that is it misdemeanor “‘to wear any part of the uniform of the national guard’ or the U.S. armed forces, ‘or a uniform so similar as to be easily mistaken therefor, unless the person is a member of the service whose uniform he wears.’”

The events taking place on the border are not unprecedented. In 2019, the border militia group United Constitutional Patriots (UCP) was similarly detaining migrants in Flora Vista, New Mexico. The group’s leader, Larry Mitchell Hopkins, was ultimately arrested and charged with illegally possessing a firearm in the state of New Mexico. In April 2020, Hopkins was sentenced to 21 months in federal prison for being a felon in possession of a firearm. A second member of the group and spokesman, James “Jim” Christopher Benvie, was also arrested and charged with two counts of impersonating Border Patrol agents. In October 2020, Benvie was sentenced to 21 months in prison for impersonating Border Patrol agents and unlawfully intercepting and interrogating migrants.