Hatewatch’s Freddy Cruz sat down with Latty to discuss what excites her about the latest season of the podcast, telling diverse stories, and the importance of amplifying the voices of people harmed by hate and extremism. The new season of Sounds Like Hate explores border militias in Arizona, voter suppression in Georgia, anti-LGBTQ discrimination in the foster system, and more.

This interview has been edited and condensed for clarity.

Yvonne: Yeah, I've hosted and produced other podcasts. I guess a year ago now, [I] did a piece for NPR Latino U.S.A. about my mom's journey and my journey as well through her Alzheimer's disease.

Freddy: What brought you to the realm of hate and extremism?

Yvonne: I don't really have an interesting story about that. A colleague told me they were looking for a new cohost, I put my name in the hat and I got it. There's no real exciting narrative about how I wound up a part of the team, so sorry about that! It really aligns with my interest, so I jumped at the opportunity and was blessed enough to get it. 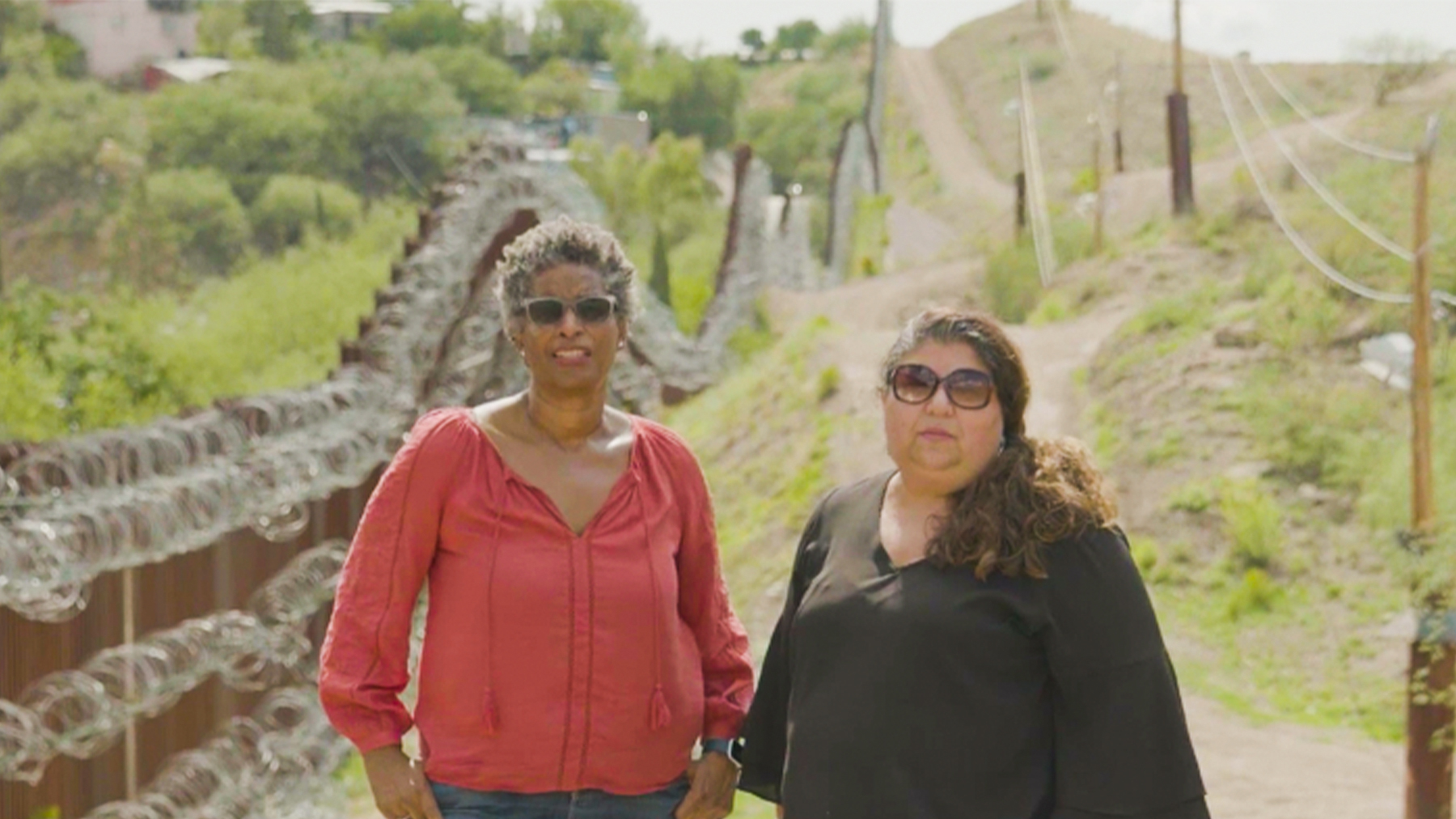 Yvonne Latty, left, visited the southern U.S. border with Sounds Like Hate cohost Jamila Paksima for season three of the podcast. "It was really beautiful out there, but it's just really deadly," she said. Photo credit: Yvonne Latty.

Freddy: You also had a recent trip down to the Southwest, is that right?

Freddy: How was that?

Yvonne: I've been [to the southern U.S. border] before – it was different this time. It was sad the first time I went, and it felt even sadder this time. It was exciting, it was scary, it was sad. It's really beautiful out there, but it's just really deadly. It's a mean-spirited place. The barbed wire at the wall, you know, now they've put razor on it. It was already bad, but you definitely see the effects of Covid, you see the effects of Trump's rhetoric. It's a very sad place, but at the same time there are so many good people, just being human. [There are plenty of] people who see a migrant in desert, and they'll get help, they really care. But their voices are often drowned out by the mean folks. 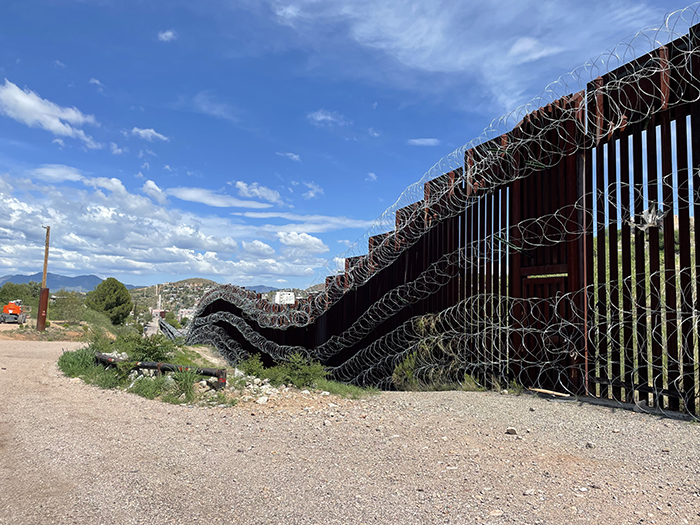 "It's a mean-spirited place. The barbed wire at the wall, you know, now they've put razor on it," Latty said of the southern U.S. border. Season three of Sounds Like Hate investigates border militias in Arizona who have harassed migrants and humanitarian workers. Photo courtesy Yvonne Latty.

Freddy: I'm assuming, your previous trip down there was more personal? Or was it also project related?

Yvonne: I took my graduate students. We travel every year and one of the first trips I took with them was to the Arizona border to Nogales, in partnership with the University of Arizona. We did a lot of reporting along the border, and so a lot of the things I experienced through my students. It was different this time because I wasn't the person helping and assisting. I was in the middle of it all trying to report as hard as we could in a short amount of time.

Freddy: Given the transition that we're coming out of with the Trump years, there has been a lot of hateful sentiment around immigrantion. It can be quite troubling.

Yvonne: Well, I'm from an immigrant family, so it all hits close to home. I'm just one generation away. My mother immigrated from the Dominican Republic when she was a young adult and worked hard, put a lot into my education. It's like she is everything [extremists] feared. When she became really ill with her Alzheimer's, one of her hallucinations was that ICE (U.S. Immigration and Customs Enforcement) was coming to get her. Watching Univision and Telemundo, she started to really see herself in the migrants. [She would call] me in the middle of the night to tell me ICE was there to take her.

Freddy: I'm so sorry to hear that.

Yvonne: My father's family is from Jamaica, and they had their own experience. Anything about immigration really cuts close to home, because I feel like the people that [anti-immigrant extremists] don't want are people like me. They didn't want me to have the opportunity to grow up here, they don't want my parents, and an extension of that is they don't want my children. When I do immigration reporting it feels close to my heart. I feel a really strong identification with people who want to flee poverty for a better life, because that's exactly what my mother was doing. She was fleeing poverty and the hopelessness that she knew she was going to face if she stayed. There were zero opportunities for her as a young woman: nothing, absolutely nothing.

Freddy: As a first generation American, I understand. I think that empathy drives a lot of the work we are doing, I want to thank you again for doing such an amazing job on the podcast, with the stories you have been reporting on…

Yvonne: They are good, aren't they? I love this season, I feel this season has a lot of heart! I thought the previous seasons were good as well. But this season, I like the balance between the bad guys and the good guys. The voices of the good guys are rising above the bad guys. I learned from the militia reporting, [many of these people are] just kind of confused. Because of their confusion and anger about their own lives, they're taking it out on people more vulnerable. That's been the pattern I've seen in the United States forever. It feels like Americans are always looking for someone else to blame for their own situation rather than just saying, yeah what can I do for myself to make my life better? Should I go take a night class? Should I leave my husband or my wife? Should I spend more time with my children and try to be a better parent? Should I take better care of my parents? Should I be a better friend?

[Something I think about a lot is], how much does fear drive us? And if it does drive us, can it drive us to do good? I feel like it drives me to want to do journalism that matters, to tell stories about people whose stories aren't being told. But for these militia people, their fears drive them to hate.

Freddy: It seems that’s the legacy that was left behind by Trump and the previous administration. A lot of nativist sentiment lingers. There is also a lot of activity that is happening at a local level and state level, including the issue of voting rights, which you cover on the podcast this season. Can you talk a little bit about that?

Yvonne: That was my first story [for the podcast]. It was Georgia, it was incredible because I got to leave my house and travel after being home for what seemed like forever! I spent time with [disability rights advocate] Gaylon Tootle, which was just an amazing educational experience. You can stand for hours [waiting to vote] if you want to, but I was thinking, if you're disabled you really can’t. They seemed like the community where the numbers were really going to go to zero because it's just hard. So that's why I decided I wanted to focus on them. [I also spent] time with Lee Jones (CEO and founder of Inspire Positivity, a disability rights organization) who also has disabilities, but you don't see them. That's a reminder to me, and I hope to others, that a lot of disabilities are invisible, and they're just as challenging.

I left that trip and I had learned so much about voter suppression and what it really looks like, who it's going to hurt, how it's going to hurt people, and how voiceless they are in so many ways – but they continue to fight. That was my first story. It was incredible, and it gave me a taste of all the important work that we can do together.

Freddy: And that was one of my favorite parts of this season, is interviewing different folks and actually being on the ground and offering a perspective that I think a lot of times is missed. The media misses too many opportunities to give a voice to communities impacted directly. I think overall the season is going to be quite interesting, because there is a diverse set of stories.

Yvonne: It's very diverse, and I think for me as a journalist it's always important to tell the stories of the people who are affected by it. That to me is what matters.

Freddy: Were there any major takeaways from this season’s reporting that you would like to share with listeners? 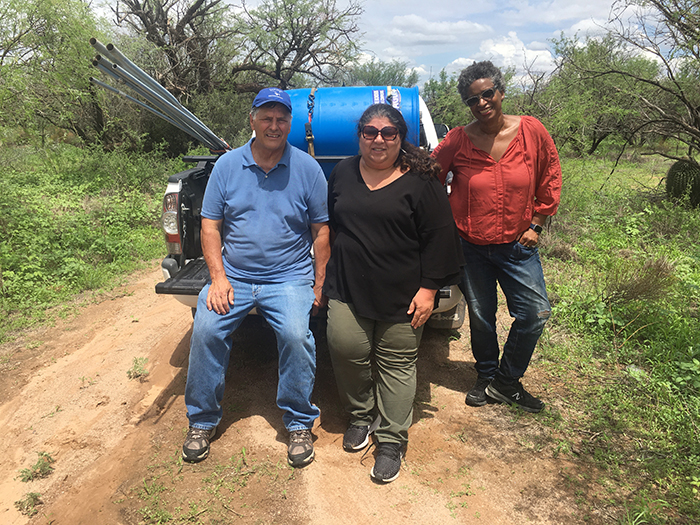 Latty and Paksima with Doug Ruopp, chair of the humanitarian group Humane Borders. "There's a lot of people who are thick in the fight who are not being seen," Latty said. Photo courtesy Yvonne Latty.

abled people to the polls. Amplify the voices of people that are trying to do good. Support them, and then think, in your own way, what you can do to stop hate? It doesn't have to be something dramatic, it can be something small and simple that can have ripple effects.

Freddy: Looking down the line, any major projects that you think are worth checking out? Anything you’d like to work on?

Yvonne: I had started investigating [murders of trans people in the U.S.]. I'd really like to go back to that, I feel like that's another issue that's not reported well or suffers from a lot of misconceptions. There’s so much anger and hate behind that issue, so I would really like to dive deeper into that, but also dive into some of these bills being passed against the trans community. I'm also still interested in immigration; I'd like to do something about Haitian migrants. When I was at the border, when we went to [the Casa Alitas humanitarian shelter], there were a lot of Haitians there. [Haiti] has a beautiful inspiring history that's overshadowed by so much disaster, destruction and poverty and corruption.

Freddy: I do want to end things on a positive note, so for the last question, I want to ask you, what is giving you hope right now?

Yvonne: What gives me hope is the people I interviewed, all the humanitarians and the advocates and just the people who care. In my head, I don't focus on the extremists. To me the stories are about the people who are affected by them, and their fight. So they're what gives me hope. Having meetings with you guys, and seeing so many young people, such smart talented people in the fight, with an organization that's been around for so long, gives me hope for future. I just feel like hate doesn't win in the end.