A Hungarian education foundation paid Dennis Prager $30,000 in public funds for two appearances during an August youth festival where he and Fox News host Tucker Carlson touted the country’s far-right stances on the media, immigration and LGBTQ issues, according to a contract obtained by Hatewatch.

PragerU is not a university. It hosts five-minute videos where hosts provide a right-wing explanation of controversial topics. Most hosts are establishment conservatives, but many videos feature extremist far right talking points, including anti-immigrant rants and anti-trans rhetoric.

Prager’s and Carlson’s appearances are part of a continuing effort by Hungary’s Prime Minister Viktor Orbán “to take over, slightly soften and then mainstream extreme right messages to unite the right under his flag,” according to Bulcsú Hunyadi, head of the Radicalisation and Extremism Programme at Hungarian think tank Political Capital.

Orbán and his ruling Fidesz party have led Hungary on a far-right populist platform since 2010. The government has gained near-total control over the media landscape. They banned LGBTQ teaching materials from Hungarian schools and mainstreamed conspiracy theories claiming that liberal Hungarian-American billionaire George Soros is funding deliberate efforts to change demographics of Western countries, a variation of the white nationalist narrative known as the “great replacement.”

Hatewatch obtained the contract through a Hungarian public information request to MCC, which hosted the August event. MCC sent two $15,000 payments to Prager’s Kansas and Brooklyn Inc. One payment was for a roughly 30-minute speech, titled “Media and Free Speech” and another was for a 30-minute podcast appearance, “What kind of education is needed in the 21st Century,” according to the contract. 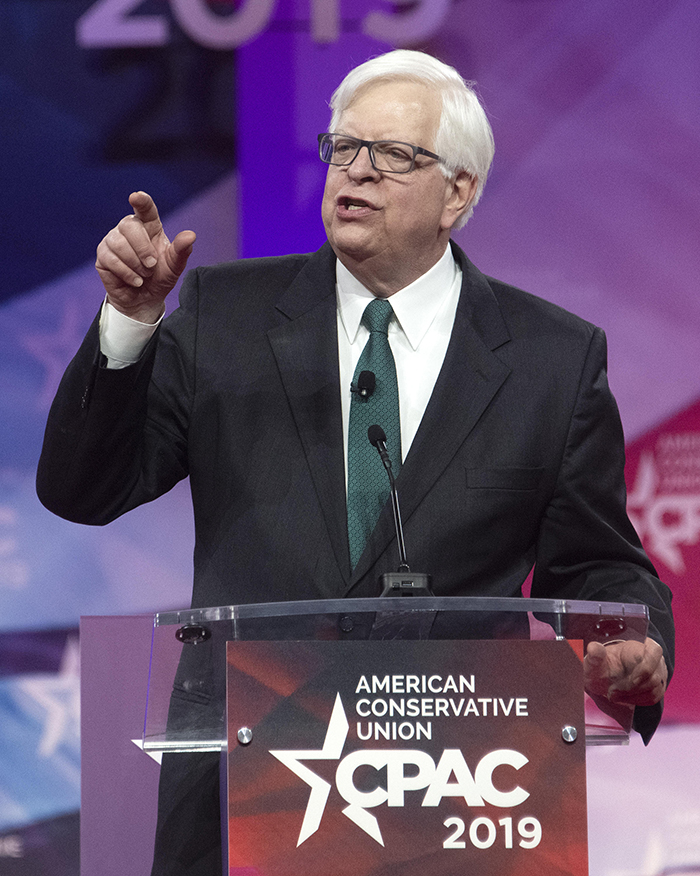 This amount is greater than four years of Hungary’s minimum annual salary, which is roughly $6,780. The contract states MCC paid for Prager’s accommodation, but the organization told Hatewatch they did not pay accommodation costs.

MCC told Hatewatch it bore no cost for Carlson’s appearance and did not deliver any agreement between the parties.

Prager said in a response to a Hatewatch request for comment that $10,000 of the fee paid for “business class airfare,” so his fee “was approximately $20k.” The contract Hatewatch obtained did not outline this aspect of the agreement. The contract did say MCC provided accommodation “at its own expense.”

MCC’s invitations to Prager and Carlson “fit the above strategy,” Hunyadi said in an email. The speeches elevated “Orbán’s image, disseminated his message in the U.S. and globally, and made him appear as an influential global player.”

Carlson, the most-viewed cable news host in the U.S., praised Hungary’s anti-immigration policies during his speech. He has espoused the white nationalist replacement theory on his program and partly blamed Soros for “why so many people are being robbed, raped and killed in American cities” in an editorial for Fox News.

Prager called teaching about the LGBTQ community “propaganda” during his MCC podcast appearance, which focused on the need for right-wing propaganda in education and the founding of PragerU.

Prager used similar talking points in both his speech and podcast appearance, where he claimed that Hungary’s brand of far-right, ultranationalist governance makes them the “saviors” of “Western Culture.”

During his MCC speech, Prager said: “Western Europe is pretty much lost. … America is not yet lost to the left. But it does not look good.”

The Hungarian parliament – in which Fidesz has held three consecutive supermajorities since 2010 – passed legislation in June banning teaching materials that include any mention of LGBTQ identity.

Prager told MCC podcast host Péter Heltai that LGBTQ materials in schools only appear “as propaganda, not education,” and children “should not be taught anything anti or anything pro, the issue should not be raised.”

Research from GLSEN, a nonprofit that works to end discrimination based on sexual preference and gender identity in schools, claims the opposite.

GLSEN produces a yearly study on the effects of inclusive curriculums and school supports for LGBTQ students. The 2019 study showed that students taught in schools with inclusive curricula and other support resources were less likely to hear homophobic remarks and slurs, and to feel unsafe.

Positive environments produce better outcomes. According to GLSEN’s research, LGBTQ students are less likely to miss school and more likely to have a higher GPA when taught in schools with inclusive curriculum.

Prager said in his response his “general position” is that “schools should not deal with any topics regarding sex or sexuality” until “high school.” Prager also said he views “a gay as a child of God exactly as I do a heterosexual.”

Prager has expressed social acceptance of gay and bisexual people, but is against same-sex marriage and has made anti-trans comments.

Prager also appears on a fundraising page for the Alliance Defending Freedom, an anti-LGBTQ hate group.

Hungary banned same-sex couples from adopting in December and outlawed trans people from changing birth gender on their documents the previous May.

PragerU videos accuse mainstream media of left-wing bias. During his speech, Prager lamented media “brainwashing” the public and efforts by tech companies to stop the spread of misinformation about the COVID-19 pandemic.

“You cannot say that maybe therapeutics are better than a vaccine. … I personally have been on ivermectin for the last year and a half,” Prager said. He claimed he is not vaccinated and did not contract COVID-19 despite not practicing social distancing.

Ivermectin is used in humans and animals to treat parasites, not viruses. The Food and Drug Administration warned against ivermectin’s use for treating COVID-19 in April.

During a question-and-answer section at the end of Prager’s roughly 25-minute speech, an audience member who claimed to be from Canada asked Prager what hope he sees for the U.S. and Canada.

Prager said there was hope, but media efforts to censorship right-wing movements “a very serious problem.”

“There is a lot less media freedom in Canada than Hungary,” the audience member said.

Prager replied: “That’s correct. That was my point.”

International watchdogs and Hungarian journalists disagree. Reporters Without Borders, known by its French acronym RSF, ranked Hungary 92 out of 180 countries in terms of press freedom in 2021. RSF ranked Canada 16 out of 180.

RSF said the government’s “hegemony over the Hungarian media landscape” is its reasoning for the low ranking. RSF included Orbán in its “predators of press freedom” report this year, the first European head of state to appear on the list.

“The government is buying up the public sphere” and using state funds for advertising “with the aim of repeating and intensifying the actual government messages,” Attila Batorfy, a master teacher of journalism, media studies and information graphics at Budapest’s Eötvös Loránd University and member of Hungarian investigative outlet Atlatszo’s data team, told Hatewatch.

Tamás Bodoky, editor-in-chief of Hungary’s premier investigative outlet Atlatszo, told Hatewatch, “The government’s media policy is the complete opposite of what I would call openness, it is honestly totalitarian.”

In 2015, tens of thousands of asylum seekers arrived at Hungary’s borders, the entry point to the European Union for those coming through Serbia. They fled war-torn areas in Syria, Iraq and elsewhere. 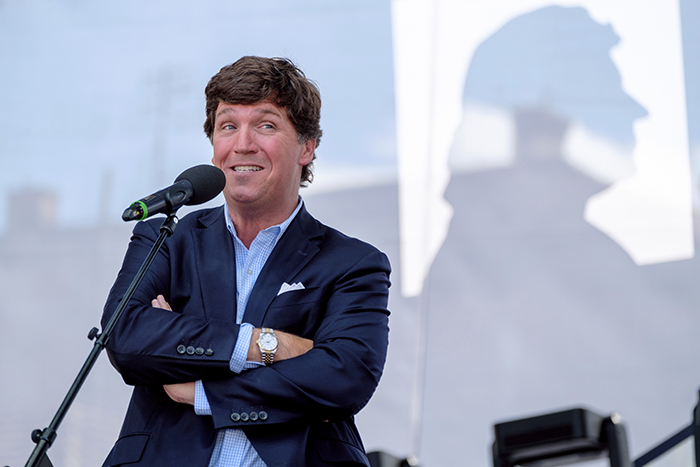 “I was impressed personally by the response of your government to the 2015 migrant crisis. Hungary stood alone, essentially, in saying, ‘No thanks.’ And that struck me as a totally legitimate thing to do,” Carlson said at the top of his speech.

Carlson hosted his program from Hungary during his stay. He aired footage of his trip in a military helicopter to the Serbian-Hungarian border, where he witnessed Hungarian law enforcement pushback two men to Serbia.

Carlson said the border was “clean” and there were “no scenes of human suffering, because it was under control.”

During his MCC speech, Carlson recounted watching Hungarian border guards apprehend two men who “were led politely out and brought to the other side. … The whole thing took 30 minutes.”

András Léderer, senior advocacy officer at the Hungarian Helsinki Committee, the only group in Hungary that provides free, high-level legal advice to refugees, told Hatewatch this was “an unlawful pushback of two Syrian nationals.”

The advocacy officer explained the Hungarian Constitution “prohibits collective expulsions,” as does the European Convention on Human Rights, the 1951 Refugee Convention, the European Charter of Fundamental Rights and the European asylum acquis.

Despite Carlson’s depiction of a “polite” interaction, many “of these measures are accompanied by severe violence committed by law enforcement agents. Regardless of the violence, the measure is unlawful,” Léderer said.

Fox News did not respond to Hatewatch’s request for comment on Carlson’s appearance in Hungary.

Orbán justifies the hardline stance by calling immigration a threat to Hungary’s ethnic makeup. “We do not want our own color, traditions and national culture to be mixed with those of others,” he said in a 2018 speech.

Orbán blamed Soros, who is Jewish, for financing “pro-migration” organizations. Fidesz passed the “Stop Soros” laws in 2017 and 2018. These laws forced NGOs with foreign funding to register and levied a 25% tax on foreign donations to NGOs that total more than $24,000. He also called refugees “Muslim invaders” in a 2018 interview with German tabloid Bild.

White nationalists view the replacement theory as reality. They chanted, “Jews Will Not Replace Us” in Charlottesville, Virginia, ahead of the deadly 2017 white nationalist rally.

Carlson airs similar extremist rhetoric on his program. He defended the “great replacement” on April 8 of last year. He blamed Democrats for ongoing efforts to “change the electorate,” claiming immigrants gaining the right to vote disenfranchises him.

Prager, who is Jewish, did not speak about immigration in his public MCC appearances. But Prager appeared on far-right racist Stefan Molyneux’s podcast in 2017 to speak about the need for God in morality, wherein Prager highlighted that there were more mosques than churches being built in Europe.

Prager responded that he does not see why “one would not infer that more mosques than churches have been built in Western European countries,” given that “vast majority of Western Europeans is secular, especially among the young.” Prager cited data from Pew Research and the European social survey conducted between 2014 and 2016.

Regarding his interview on Molyneaux’s podcast, Prager said, “There is virtually no one, right or left, whose podcast I would refuse to go on. I want to spread American and Judeo-Christian values to every audience possible.”

Orbán faces the toughest election challenge of his ten-year rule in 2022. All major opposition parties have united on a single ticket to face Fidesz. Politico’s poll showed them consistently neck-and-neck as of December.

Hunyadi acknowledged the concerns over Fidesz losing its supermajority.

“The invitation of Prager and Carlson,” along with Bannon and Yiannopoulos, “had benefits for the domestic context: Hungarian voters could experience that leading U.S. ideologues visit the country, talk like PM Orbán and praise him and his politics, ” Hunyadi said.

Still, Hunyadi sees favorable conditions for Orbán in the years ahead.

“Immigration is likely to play a crucial role in the upcoming years and probably decades due to the political turmoil and unpredictabilities in the Middle East and Africa and the effects of climate change,” he said. “I expect him to find opportunities to present himself as the vanguard of the global hard right-wing populist movement in the future as well.”