Former Breitbart London executive editor James Delingpole recorded a livestream in December with a Scottish white nationalist who previously called race war in Europe “inevitable” and once floated the idea of torpedoing refugees at sea.

Delingpole, 56, who in addition to leading Breitbart’s U.K. division has published work for U.K.-based publications including the Daily Mail, Daily Express, The Times, The Daily Telegraph and The Spectator, joined the livestream with Colin Robertson, the white nationalist influencer who has for years published extreme far-right propaganda under the pseudonym “Millennial Woes.” 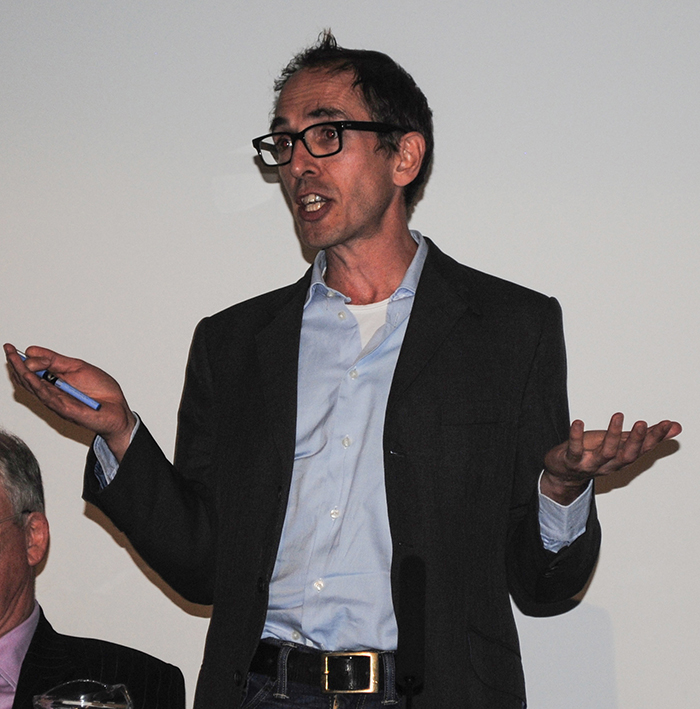 James Delingpole speaks on reasons to join the U.K. Independence Party in 2013. Photo by The Freedom Association (Creative Commons)

Robertson has attended white nationalist conferences throughout Europe and the U.S., including an infamous 2016 Richard Spencer-led event in which participants threw up Hitler salutes on camera.

Robertson’s channel on the “alt tech” platform Odysee published the conversation between Delingpole and Robertson on Dec. 16. It was recorded as one of an annual series of year-end “Millenniyule” videos.

Hatewatch found the chat after Robertson posted it alongside conversations with a number of prominent U.S.-based white nationalists, including American Renaissance’s Jared Taylor and Kevin Deanna, Greg Johnson of the white nationalist publishing house Counter-Currents, and Mike Peinovich. Robertson also published a conversation with U.K.-based neo-Nazi Mark Collett, who advertised Hitler’s Mein Kampf to his followers in May.

Delingpole stands out among Robertson’s guests for the project because of his prominent role at the highly-trafficked Breitbart, and for his commentary work in mainstream publications.

In the 85-minute video with Robertson, Delingpole gave voice to conspiratorial claims, saying that “Brexit was a psyop” designed to divide Britons. He said that Britons have been “brainwashed over a period of decades” into a form of “pathological altruism” that had allowed governments to introduce COVID-19-related public health measures with popular support.

Together, he and Robertson spun a narrative about the pandemic as a “globalist” plot to “engineer” the erosion of national sovereignty. Delingpole also showered his white nationalist host with compliments, calling him “sensitive” and “intelligent.”

Delingpole achieved international prominence during the 2000s as a blogger for London's Daily Telegraph. There, Delingpole called the belief that human beings were responsible for climate change a “myth.” In one notable 2013 column, Delingpole attacked climate scientists, claiming that “hanging was too good for such ineffable toerags.”

His more recent Breitbart output has focused on criticizing vaccine mandates and other public health measures associated with the COVID-19 pandemic.

Delingpole has accused lawmakers from the U.S. and Europe of using the pandemic as a pretext for ushering in the creation of the “New World Order,” a conspiracy theory popular with the far right and the antigovernment movement.

In a July 14, 2021, column, Delingpole called France “fascist” for introducing vaccine requirements at restaurants, bars, cinemas and other businesses.

Delingpole wrote for a variety of right-leaning publications such as the Daily Mail and the U.K.’s Spectator before being appointed founding co-editor, along with far-right activist Raheem Kassam, of Breitbart London, the company’s British arm, by then-executive chairman Steve Bannon.

Since that appointment, there has been no apparent public announcement that Delingpole was no longer acting in the role.

At the time of publication, Delingpole was still billed as Breitbart London’s executive editor on, among other places, his Wikipedia entry and his Spectator byline.

As recently as Jan. 10, Delingpole was described as being in the role in an interview with far-right Canadian online outlet Rebel News, though the site later scrubbed that reference to the job from the article.

In a Jan. 12 email, however, Breitbart’s vice president of public relations and communication, Elizabeth Moore, appeared to distance the outlet from Delingpole and his livestream appearance in response to questions from Hatewatch.

She wrote, “We were not aware that James Delingpole was on this podcast,” and added that he “is not executive editor of Breitbart London and has not been for years.”

Moore described Delingpole’s current relationship with Breitbart as contributing “columns just as he also contributes to the Spectator, the Spectator World (US edition), the Spectator Australia, and the New York Post to name just a few outlets in the past year.”

Moore did not immediately respond to a request for further clarification of Delingpole’s departure date from the executive editor role, and what ongoing staff position, if any, he has at Breitbart.

Hatewatch sent requests for comment on this story to the contact form on James Delingpole's website and his Breitbart email address, and also sent him a Direct Message on Twitter. He did not reply.

Currently, no executive editor for Breitbart London is listed on Breitbart’s masthead, only a “Europe editor and London Bureau Chief,” Oliver Lane.

Robertson’s promotion of antisemitic and anti-immigrant conspiracy theories on his “Millennial Woes” YouTube channel gained him an international following on the far right from the mid 2010s.

Robertson operated pseudonymously until a Scottish newspaper exposed his identity in 2017.

In a now-deleted YouTube video from October 2016, Robertson said that “violence, by which I mean civil war, is inevitable between us native Europeans and various immigrant groups.” The blog Angry White Men quotes a 2015 Robertson livestream in which he details what it would be like to torpedo boats carrying refugees, describing in detail the “men, women, and children being blown to bits, and drowning in a mutilated form.”

YouTube suspended Robertson in February 2021, but he continues to publish propaganda on more obscure platforms such as Odysee and Bitchute, which both play host to prominent far-right extremists. Robertson also monetizes his livestreams on Chthonic Software’s Entropystream. In late April 2020, multiple far-right extremists distanced themselves from Robertson after users on anonymous forums, such as 4Chan, began sharing screenshots of what they claimed to be explicit messages Robertson sent to women, according to Right Wing Watch.

Mark Collett, the British neo-Nazi and leader of the organization Patriotic Alternative, said at least one of the allegations came from a woman who attended an event Collett hosted.

Shortly thereafter, on April 28, Robertson announced he would be “taking a break” from far-right organizing. Despite his promise to step away from political activism, Robertson continued posting on Telegram and resumed streaming on Odysee in early 2021.

Hatewatch contacted Robertson for comment after discovering the livestream, and he responded in an email.

Asked if his political beliefs could be described as white nationalist, Robertson wrote, “I agree with the [Anti-Defamation League’s] statement that: ‘It is unrealistic and unacceptable to expect the State of Israel to voluntarily subvert its own sovereign existence and nationalist identity and become a vulnerable minority within what was once its own territory.’”

White nationalists frequently justify their own calls for white-only countries, or “ethnostates,” with tendentious claims that Israel is a model for their plans.

Robertson claimed in response to a question about the 2020 sexual harassment allegations that “Mark Collett has since realised that those allegations were false and malicious, and has publicly apologised to me for giving them credence.”

Delingpole is not the first Breitbart staffer to brush shoulders with the racist right, and the site has generated controversy for its associations with white nationalism at different times since its founding. During the site’s late-2010s peak in influence, then-executive editor Steve Bannon boasted that Breitbart served as a “platform of the alt right.”

Hatewatch and other outlets previously reported that site staffers kept in communication with white nationalists at that time, seeking to promote anti-immigrant and white supremacist conspiracy theories through the heavily trafficked website. The site’s present executive editor, Alex Marlow, told The New York Times in 2017 that he sought to make Breitbart a “legitimate” news site.