Roughly one in five applicants to the white supremacist group Patriot Front claimed to hold current or former military status, according to leaked documents reviewed by Hatewatch.

The journalist collective Unicorn Riot leaked archives of Patriot Front’s private chats on Jan. 21. Patriot Front held these conversations on Rocket Chat, an open-source chat program, where they published 87 different applications for membership. The applications show that 18 of those 87 applicants (21%) claimed to be current or former members of the U.S. military. One of the applicants, who claimed to be a former Marine, also stated in his application that he currently works for the Department of Homeland Security (DHS). 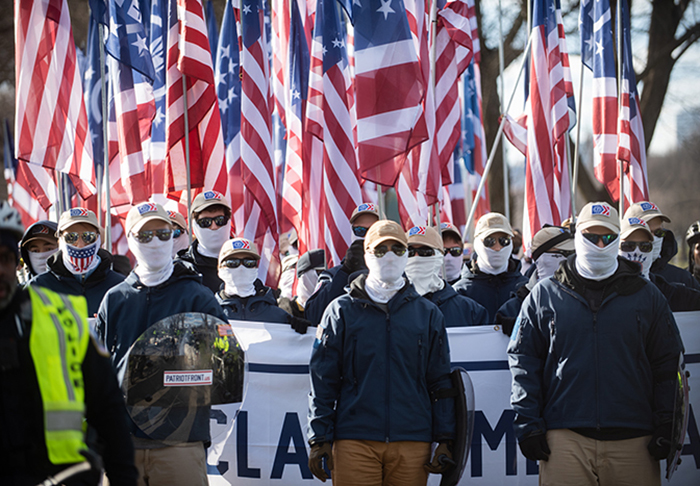 Patriot Front marches from the Lincoln Memorial to the U.S Capitol in Washington, D.C., for a private rally, escorted by D.C. Metro Police, on Feb. 8, 2020. (Photo by Zach D Roberts/NurPhoto via Getty Images)

Hatewatch’s finding from the leak comes amidst growing public concerns about the radicalization of people serving in the U.S. military. Observers have noted an over-representation of military-affiliated people involved in storming the U.S. Capitol building on Jan. 6, 2021. A House panel convened on Oct. 13, 2021, to address concerns about the recruitment and radicalization of military personnel.

Patriot Front, a rebrand of the neo-Nazi group Vanguard America, who attended the deadly “Unite the Right” rally in Charlottesville, Virginia, in August 2017, represents one of the most prominent white supremacist groups in the country. Led by a 23-year-old man named Thomas Rousseau, the group advertises itself with an aesthetic built around Americana, as found in fliers brandished with images of eagles and the American flag. The group undergirds that imagery with racist, antisemitic and neo-fascist rhetoric. Members of the group, including some of the applicants found in leaked chats, express an open admiration for national socialism and Nazism.

The Patriot Front applicants, listed by number, who claimed ties to the military expressed a variety of motivations for seeking entrance to the group. Applicant 441215, who said he lived in San Diego and served as a former Marine and current DHS employee, told Patriot Front that he “found out about the Jews while in the marines.” Hatewatch emailed DHS for a comment about the applicant who claims to work for them but did not immediately receive a response. Applicant 252979, who claimed to be a member of the Army Reserve, used derogatory language about LBGTQ people and stated he “first saw” them while in the military. Applicant 681985 claimed to have served in the military from 2005 to 2013 and live in Salt Lake City. He said that he started as a Republican, but after his first deployment he started watching Alex Jones and entertaining conspiracies related to 9/11. After his second deployment, he said he “shifted focus and questioned things” while becoming a national socialist.

The applicants also offered to Patriot Front promises of skills they obtained while serving. Applicant 843667, who claimed to be a former Army Ranger from Fort Worth, Texas, lists his skills as “great land-navigation, great physical fitness, able to clear rooms” along with “basic medical training.” Applicant 599797 promised a knowledge of “Marine martial arts” and said he had been “trained in firearms.” Applicant 193293 described working in military intelligence and having a knowledge of programming, computer networking and general SIGINT, or signals intelligence. Applicant 331013 explained how he trains people in “marine corps martial arts,” and claimed to be a leader of the Kansas Active Club, an affiliate of an SPLC-designated hate group.

Patriot Front members committed multiple acts of racist vandalism in recent months. In June 2021, Members of Patriot Front vandalized a statue of George Floyd in Brooklyn, New York. Members of the group vandalized a mural commemorating Black tennis legend Arthur Ashe in Richmond, Virginia, in October 2021. The group has also staged rallies in Philadelphia, Washington, D.C., and Chicago since summer 2021. Most recently, a collection of a few dozen Patriot Front members joined the March for Life in Washington, D.C., an annual event organized by leaders of the anti-abortion movement.

Dates of events mentioned in the leak match Hatewatch’s observations of Patriot Front’s public facing activity. Rousseau, Patriot Front’s leader, appeared on a podcast hosted by neo-Nazi Joseph Jordan on Jan. 28 and acknowledged the authenticity of the leak, while seeking to downplay its significance. He claimed responsibility for his members being exposed in the material.

“They do these things to inspire paranoia and hysteria, right. They want you to be afraid,” Rousseau said.