While UA claims to be a “non-partisan” group, it has previously hosted other right-wing extremist speakers including Milo Yiannopoulos, and its founder is linked through another far-right campus group to a white nationalist publisher that sells pro-Nazi literature.

According to UA’s website, McInnes is scheduled to speak at Penn State’s Thomas Building on Oct. 24 at 8 p.m., along with far-right social media performer and provocateur Alex Stein. 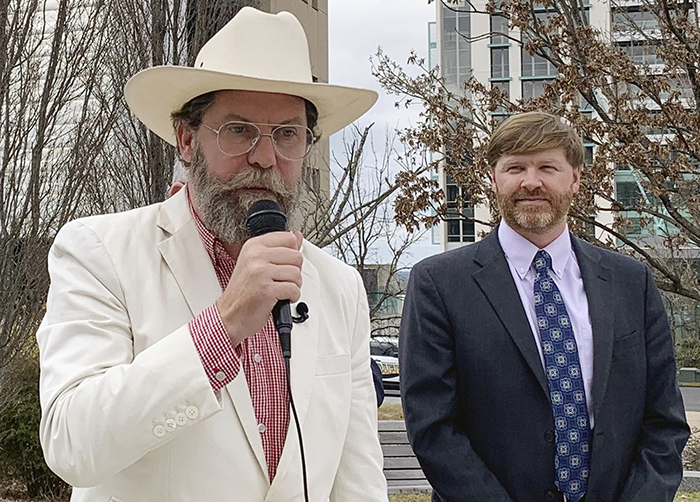 Proud Boys founder Gavin McInnes, left, discusses a lawsuit he filed against the Southern Poverty Law Center during a news conference in Montgomery, Alabama, on Feb. 4, 2019. His attorney, Baron Coleman, listens on the right. (Photo by Kim Chandler/AP Images)

McInnes founded the Proud Boys hate group in 2016. He distanced himself from the group after it became mired in legal troubles following a 2018 brawl in New York City, and he subsequently lost prominent platforms in conservative media outlets. McInnes continues to make video commentary for his own Free Speech TV outlet.

McInnes is also the plaintiff in an ongoing defamation lawsuit against the Southern Poverty Law Center, publisher of Hatewatch.

Stein, who is little-known outside the far-right's online subculture, achieved fleeting moments of broader prominence through trollish publicity stunts, such as an incident where he filmed himself hurling racist and sexist abuse at Rep. Alexandria Ocasio-Cortez.

The October speaking event is hosted by UA’s Penn State branch, one of three listed on the organization’s website along with branches at the University of Tennessee, Knoxville (UT), and the University of Wisconsin-Madison.

At UT, meanwhile, the group is advertising an event scheduled for Nov. 14 at the university’s Strong Hall in which “John Doyle will be debating Hunter Avallone on Gender Roles and gender politics.”

John Doyle is a far-right social media personality associated with white nationalist streamer Nick Fuentes and the so-called “Groyper” movement he leads. Like Fuentes, Doyle seeks to appeal to young white men – whom he reportedly describes as “the forgotten gamers of America” – with misogyny, paleoconservative politics and racialist pseudoscience. While he used to transmit propaganda to more than 340,000 subscribers through his YouTube channel, in recent months the channel has been dormant, and Doyle has urged supporters to take out monthly subscriptions via his website. Doyle reportedly organized a “Stop the Steal” rally alongside Fuentes in Detroit, Michigan, on Nov. 11, 2020, after Fuentes praised him as “pretty based.” (“Based” is a term often used to signal acceptance between members of the far right.)

Hunter Avallone is a political YouTuber who drew attention and positive mainstream coverage after renouncing conservatism and Christianity in 2020. Since then, he has participated in a string of on- and offline debates with right-wing figures, often on university campuses.

UA bills itself on its website as a “non-partisan organization dedicated to fighting for freedom of speech.” But to date, all the events hosted by the organization have platformed far-right speakers.

On Nov. 4, 2021, the group brought Milo Yiannopoulos to Penn State for an event that was advertised as addressing “free speech, faith, conversion therapy, hair style, and more!” Posters bearing the slogan “Pray the Gay Away” reportedly advertised the appearance. Other student groups, including Students Against Sexist Violence (SASV), greeted the event with protests and condemnation.

UA then hosted events on April 27 at Penn State and May 4 at UT featuring Elijah Schaffer and Steven Kenneth “Destiny” Bonnell.

Elijah Schaffer is a far-right internet performer who has used his YouTube channel, podcast, social media accounts and livestreamed coverage of political protests to attack people of color, LGBTQ people, Native Americans, immigrants and Jewish people. Schaffer entered the Capitol building in the company of pro-Trump rioters on Jan. 6, 2021, and he posted a picture from inside House Speaker Nancy Pelosi’s office. Schaffer was employed by Glenn Beck’s The Blaze outlet from late 2018 until September 2022. On Sept. 19, The Blaze announced that Schaffer had been “terminated” following “an investigation regarding a recent personnel matter.” On Oct. 6, the Daily Beast reported that the firing had come after allegations that Schaffer had sexually assaulted a Blaze colleague.

Bonnell is a livestreamer who has pivoted from gaming-related content early in his career to political debates, where he advances liberal positions against various right-wing figures.

After being contacted for comment by Hatewatch, a Penn State spokesman wrote: "We are not neutral about discrimination or hate, and we have expressed the University’s strong and clear views on these matters repeatedly. We also have stood for bedrock principles related to freedom of thought and expression in a democracy and a university, even when those principles cause tension with our insistence on a welcoming and inclusive community."

According to Uncensored America’s website, Sean John Semanko founded the group in 2020. Whois records for that website show that a Sean Semanko first registered the domain on Feb. 19, 2020, and provided an on-campus address at Penn State to the domain registrar. Elsewhere on the website, Semanko claims to have graduated with an advertising degree from Penn State, and he was reportedly a senior majoring in advertising in 2019. Public records show that Semanko, 25, originally hails from West Chester, Pennsylvania.

Semanko reportedly served in 2018 and 2019 as the secretary for Penn State’s Bull Moose Party, which members described as an “alt-right club.” His tenure overlapped with Vincent Cucchiara’s term as the group’s communications director. In 2018, Semanko told The Atlantic about his “conversion” from more moderate Republicanism to the pro-Trump Bull Moose group and addressed his campaign work for the former president.

Another member and former president of the Bull Moose Party, Robert Morss, was convicted in federal court on Aug. 23 over his violent behavior in the assault on the U.S. Capitol on Jan. 6, 2021. Morss, of Glenshaw, Pennsylvania, went to the Capitol armed with a knife and scissors, fought with police and climbed into the Capitol through a broken window. He also passed a chair from inside to other rioters still outside. Morss, a former Army Ranger and Iraq combat veteran, will be sentenced on Jan. 6, 2023.

This article was updated after publication to reflect comments from Penn State.