While right-wing extremism mobilized voters against the GOP, former President Donald Trump’s endorsement did not appear to help candidates who received it, with most of Trump’s picks falling short at the polls.

The resounding success of potential Trump challenger Ron DeSantis in Florida, meanwhile, raised questions about Trump’s continuing influence in the party, even as it confirmed that national party leaders will continue to advocate extreme policy positions.

In Senate races, with few exceptions, Trump-favored Republicans either failed decisively or performed below expectations.

Blake Masters, whose campaign repeatedly invoked “great replacement”-style narratives of an “invasion” at the U.S. Southern border, was locked in a close race with Democrat incumbent Mark Kelly at the time of reporting.

Masters’ campaign was bolstered by donations from far-right figures in Silicon Valley including Peter Thiel, Masters’ mentor and former employer, who donated $15 million to a PAC supporting his election. Masters easily won his primary after being endorsed by Trump. In turn, Masters paid homage to Trump in his policy positions, promising voters he would finish the former president’s border wall, questioning the result of the 2020 election and adopting a hardline position on abortion, which he later attempted to walk back.

Masters was celebrated across the far right during his campaign. White nationalist website VDARE posted, “It would be a massive victory for immigration patriotism if someone like Masters can win a statewide race in a battleground state.” He also had endorsements from neo-Nazi Andrew Anglin, the publisher of the Daily Stormer, and Andrew Torba, who founded the extremist-friendly website Gab and is a self-described Christian nationalist.

Another Trump endorsee, Herschel Walker, was also lagging behind in a tight race to replace Sen. Raphael Warnock in Georgia. Walker faced a rolling set of scandals throughout his campaign including numerous allegations of domestic violence. Late in the campaign cycle, multiple women came forward to claim that Walker had pressured them into terminating pregnancies, a contradiction with his hardline anti-abortion rhetoric. His pro-police authoritarianism took a bizarre turn during his debate against incumbent Democratic opponent Warnock. Walker produced a fake police badge and held it up onstage, and it became evident that he believed honorary commissions from several law enforcement agencies empowered him as a full-fledged sheriff’s deputy or FBI agent. Walker’s campaign also embraced bigoted anti-trans rhetoric. If neither candidate gets more than 50% of the vote, Walker and Warnock will go to a runoff next month.

One prominent exception to the trend against Trump favorites seeking election to the U.S. Senate was J.D. Vance. A venture capitalist who has invested in extremist-friendly livestreaming website Rumble, Vance won a U.S. Senate seat in Ohio. Thiel, the billionaire investor with ties to right-wing extremists, partners with Vance at the venture capital firm Mithril Capital. In addition to their business partnership, Thiel donated liberally to Vance’s campaign. Former President Donald Trump stumped for Vance in Dayton, Ohio, Monday before the election.

Vance rose to prominence through his 2016 memoir, Hillbilly Elegy, which described his upbringing in Middletown, Ohio. Vance sought to position himself as a representative of poor, white, rural American Trump supporters following the book’s release. During his campaign, Vance appeared to endorse a version of the “great replacement” conspiracy theory, accusing Democrats of “[bringing] in a large number of new voters to replace the voters that are already here” in a March appearance on “Tucker Carlson Tonight.” When Vance’s opponent, Tim Ryan, accused him of endorsing the “great replacement” during an October debate, Vance accused Ryan of slander. 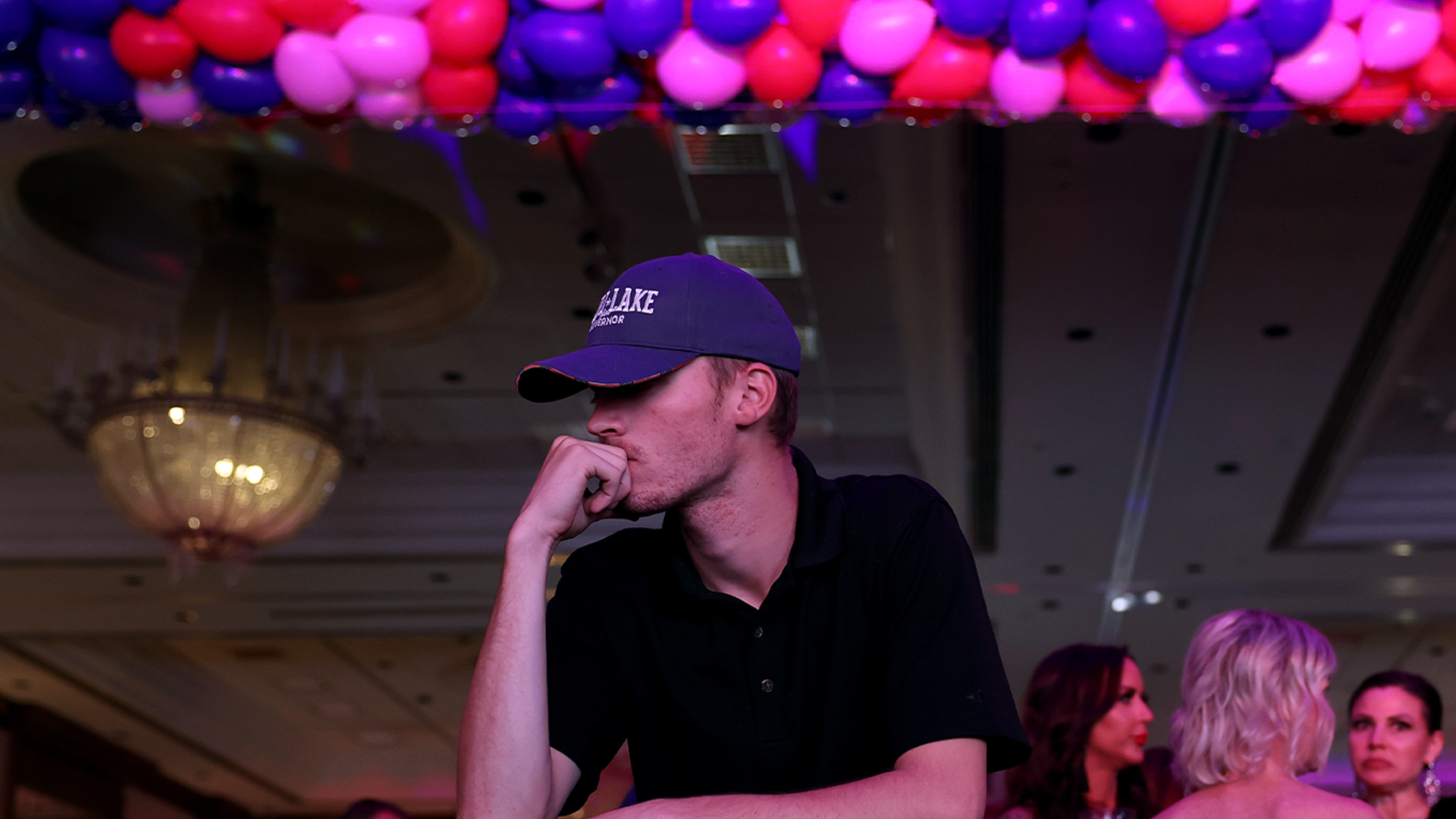 A supporter of Arizona Republican gubernatorial candidate Kari Lake reacts during her election night gathering at the Scottsdale Resort at McCormick Ranch on Nov. 8 in Scottsdale, Arizona. Election results continue to come in the race for Arizona governor between Kari Lake and Democratic challenger Katie Hobbs. (Photo by Justin Sullivan/Getty Images)

In another exception to the trend, incumbent senator and far-right Trump endorsee Ron Johnson eked out a narrow victory against Democratic challenger Mandela Barnes in Wisconsin. Like Masters, Johnson pushed conspiracy theories about demographic replacement, reportedly asking in a Fox News appearance: “Is it really [that Democrats] want to remake the demographics of America, to ensure their – that they stay in power forever? Is that what’s happening here?” Johnson also minimized the events of Jan. 6, 2021, at the U.S. Capitol, saying that “to call what happened on January 6 an ‘armed insurrection,’ I just think, is not accurate.”

Over the past few years, Johnson has developed a reputation as a COVID-19 fabulist, promoting quack treatments and spreading disinformation about vaccines.

Control of the House of Representatives hung in the balance at the time of reporting, but the “red tsunami” Trump and his allies predicted failed to arrive.

That was partly attributable to the failure of pro-Trump candidates who advocated extreme policies.

For example, Joe Kent, a Trump-endorsed candidate for Washington’s 3rd Congressional District, was behind his opponent, progressive Democrat Marie Gluesenkamp Pérez, at the time of reporting.

Kent sought to downplay the violence at the Jan. 6 insurrection and has referred to those arrested for their involvement in it as “political prisoners.” During the campaign, reporters showed that Kent removed a call to “adjudicate” the 2020 presidential election on his campaign website sometime between June and July through their review of archived versions of the website. Critics have attacked Kent for his personal ties to white nationalists and other extremists.

In June, Kent gave an interview to Greyson Arnold, a livestreamer who once referred to Hitler as “a complicated historical figure which many people misunderstand.” The interview came after his campaign sought to distance the candidate from Arnold, when the Associated Press obtained a photo of the two men in July. Likewise, in the same report, the Associated Press detailed that Kent’s campaign paid $11,375 to Graham Jorgensen, whom the outlet identified as a member of the Proud Boys. Kent has acknowledged that Nick Fuentes, a white nationalist livestreamer who once raised the specter of murdering  insufficiently right-wing Republican lawmakers, joined a call to discuss the candidate’s reach on social media early in his campaign, though Kent subsequently sought to distance himself from Fuentes.

Boebert was one of a number of rabidly pro-Trump hard-right Republicans who were elected in 2020. She attracted coverage for, among other things, setting off metal detectors with her firearm at the Capitol after vowing in election ads to go armed into the House chamber.

Democrat governors hold off extremists; DeSantis and Trump square off

Several gubernatorial candidates who were backed by Trump and shared his views on immigration, abortion and the 2020 election either failed or were mired in undecided races.

Doug Mastriano, a former Pennsylvania state senator who appeared among the crowd at the Jan. 6 insurrection, lost in his bid to become governor of that state. His gubernatorial campaign focused on Christian nationalist rhetoric, 2020 election conspiracy theories and false anti-vaccination narratives. His campaign events regularly featured members of the QAnon movement, as well as hard-right activists such as neo-Nazi collaborator Jack Posobiec. Mastriano was largely abandoned by national Republican campaigning organizations, but he nevertheless found $5,000 to spend on advertising on extremist haven Gab.

Kari Lake was lagging at the time of reporting in her bid to become governor of Arizona. Her campaign was powered by anti-immigrant and anti-LGBTQ rhetoric, 2020 election conspiracy theories and attacks on journalists covering the race. Lake proposed a compact between border states that would see armed state police carrying out border patrols in parallel to federal agencies, which she says has said have failed to stop an “invasion” by migrants. Lake’s embrace of anti-trans rhetoric was criticized by former friends in Arizona’s LGBTQ community, who remembered her bringing her own children to the kind of drag shows Lake attacked as a candidate. And on the campaign trail, Lake, herself a former newscaster in Phoenix, bickered with reporters and characterized them as monsters.

Results in Florida, however, foreshadowed internal turmoil on the far right of the Republican Party.

Far-right Florida governor Ron DeSantis won handily in the Sunshine State, but his success prompted threats from Trump that he would reveal “things about him that won’t be very flattering.”

DeSantis ran a campaign freighted with culture-war stunts that earned him the national spotlight, such as luring Venezuelan asylum seekers from Texas to Martha’s Vineyard, Massachusetts, with false promises of employment in September. That incident is now reportedly subject to local and federal investigations, but in the short term it earned DeSantis glowing praise in extremist circles and conservative media alike and built his credentials as a future leader in the movement now centered on Donald Trump.

DeSantis, who is widely seen as positioning himself for a presidential run, showed in his winning campaign how hard-right politics – including strident anti-LGBTQ and anti-immigrant positions – have been adopted wholesale by Republicans with national ambitions. This year DeSantis signed Florida’s so-called “Don’t Say Gay” law, which limited classroom instruction on gender identity and sexuality in the state’s schools, and claimed repeatedly that students were being “indoctrinated by transgenderism.”

On his watch, Florida’s Board of Medicine has banned several forms of gender-affirming care for trans minors. DeSantis signed a law banning abortion after 15 weeks of pregnancy in April, though a Florida court temporarily blocked that law in June.

While DeSantis’ extreme policy positions and culture-war antics have curried favor with Trump supporters, his victory has set up potential conflict with the former president in the lead-up to the presidential election in 2024.

On Election Eve, Trump teased a “big announcement” at a rally planned for Nov. 15 at his Mar-a-Lago club in Palm Beach, Florida. It’s widely anticipated that Trump will announce a 2024 presidential run at the rally.