Far-right extremists – many with history as vociferous Donald Trump supporters – exhibited a mixed response to his announcement of a third White House run.

While several Republican Party leaders lamented the losses of Trump-backed candidates in the midterms, some on the far right criticized and even mocked Trump’s decision. 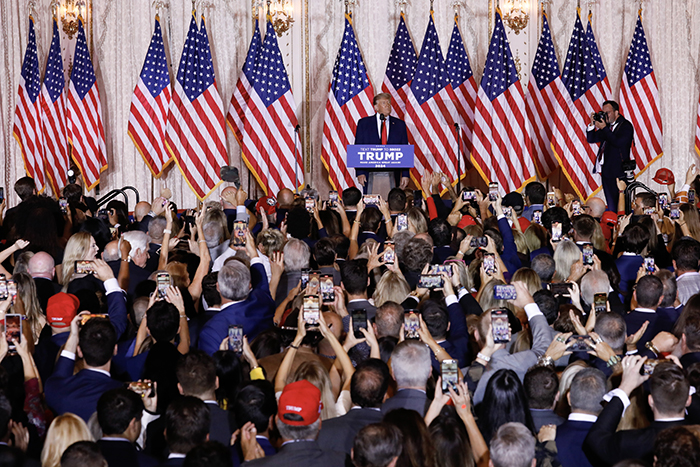 White nationalist livestreamer Nick Fuentes took to Telegram to call the announcement an “EPIC FAIL.” Members of the Fuentes-led Groyper movement, meanwhile, reacted with open hostility in comments on Fuentes’ livestream of the announcement on the cozy.tv platform, with one remarking, “OLD-ASS [N-WORD] SCARED” and another simply remarking, “CUCKED!”

Hatewatch previously reported that Fuentes’ hate speech saw him banned from a string of livestreaming services before he himself launched cozy.tv and opened it up as a platform for other extremists.

Also on Telegram, Matthew Gebert, posting in a private chat under his long-term alias Coach Finstock, opined on Trump’s announcement that “most of us fell for the magic show of 2015.”

Joseph Jordan, who produces white supremacist podcasts and social media posts under the alias Eric Striker, posted his reactions in a new Telegram channel he created after a previous channel was banned from the low-moderation platform.

On Wednesday morning, Jordan described Trump’s speech as “pathetic.” On Tuesday, he had tied criticism of Trump to his own grievances, posting: “Politically mobilizing whites means your business and livelihood will be destroyed, your reputation wrecked, your family will be threatened, and you will be put under FBI investigation. Anyone who helps you will end up in prison.”

In previous reporting, Hatewatch identified Jordan as the individual behind the Eric Striker pseudonym.

On white nationalist propaganda site VDARE, founder Peter Brimelow complained that Trump’s speech “contained no mention of legal immigration … or the abolition of birthright citizenship etc. And no zingers about Mexico not sending its best,” maintaining his long-held position that Trump’s anti-immigrant policies did not go far enough, or were inconsistently implemented.

Hatewatch has extensively documented Posobiec’s ties with white nationalists, neo-Nazis, and others on the far right.

On Twitter, meanwhile, former Trump adviser Stephen Miller excitedly tweeted, “Here we go!” ahead of the speech and linked to a video of the speech posted by far-right media outlet Newsmax, before returning to the anti-immigrant propaganda he customarily airs on the site.

Previously, Hatewatch revealed Miller’s affinity for white nationalism after obtaining hundreds of previously private emails he had sent to Breitbart News editors during 2015 and 2016.

At the time of reporting, Trump’s campaign website contained no policies or schedule, and was composed of one page with an invitation to donate money.

Trump is currently the target of two federal investigations. One concerns his handling of classified documents at his Mar-a-Lago residence, and another focused on his involvement in the events of Jan. 6, 2021, when a pro-Trump mob rioted at the U.S. Capitol.

Trump’s claims of a stolen election – which he continues to air daily on his social media platform, Truth Social – fueled election denialism among his followers. The Jan. 6 rioters were attempting to prevent then-Vice President Mike Pence from certifying Joe Biden’s presidendial election victory.

Ahead of his campaign announcement, it was widely expected that the Department of Justice would indict Trump over his handling of classified documents, and some speculated that he could soon be indicted over his alleged role in the Jan. 6 riot.

The former president is also the subject of at least five investigations in state and local jurisdictions, and several lawsuits.