Elmer Stewart Rhodes, founder and leader of the antigovernment Oath Keepers organization, was convicted of seditious conspiracy Tuesday over his role in a plot to overturn the results of the 2020 election. The verdict followed a historic seven-week trial in Washington, D.C. 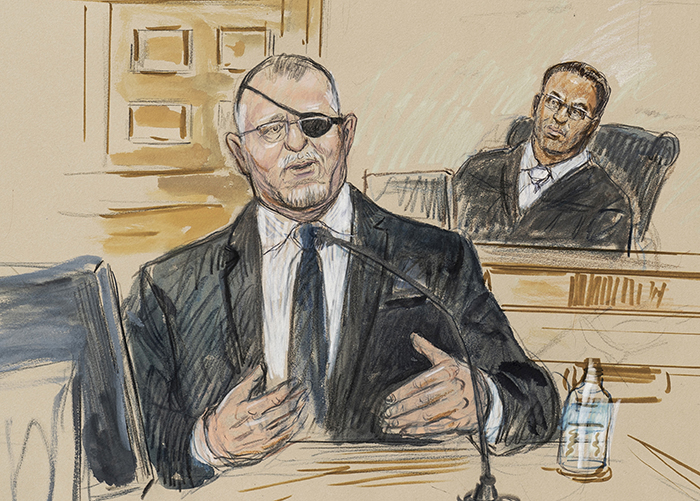 This artist sketch depicts the trial of Oath Keepers leader Stewart Rhodes, left, as he testifies Nov. 7 in Washington before U.S. District Judge Amit Mehta on charges of seditious conspiracy in the Jan. 6, 2021, attack on the U.S. Capitol. Rhodes was convicted of seditious conspiracy on Nov. 29. (Image via Dana Verkouteren via AP Images)

Rhodes’ co-defendant, Florida Oath Keeper Kelly Meggs – who on Election Day threatened to “go on a killing spree” if President Joe Biden was elected – was convicted of the same offense, which carries a sentence of up to 20 years in prison.

Three other co-defendants were acquitted of the most serious charges against them. Jessica Watkins, leader of an Ohio Oath Keepers group; Kenneth Harrelson of Florida; and Thomas Caldwell, a retired Navy intelligence officer from Virginia, were all found not guilty of seditious conspiracy, but all were found guilty on lesser charges.

Rhodes’ lawyers, meanwhile, foreshadowed an appeal against the verdict.

Rhodes’ son Dakota Adams told Hatewatch earlier this year of his family’s suffering and resilience in the face of Rhodes’ years of abuse.

In a social media direct message Tuesday night, Adams wrote, “I can breathe easily for the first time in weeks,” adding, “I thought this would happen, but the anxiety has been crushing.”

During Rhodes’ trial, jurors heard that he and others had plotted to prevent the peaceful transfer of power to the Biden administration from Election Day through the Jan. 6 riots and beyond. Rhodes and the other plotters frequently advocated the use of armed force.

The court also heard of the Oath Keepers’ extensive preparations for what Rhodes warned followers might become a “bloody” conflict that would require them to “rise up in insurrection.”

At trial, prosecutors showed how on his way to Washington, Rhodes spent thousands of dollars on a rifle, firearm accessories and paramilitary gear. They played security video from a Virginia hotel that showed Oath Keepers caching firearms ahead of Jan. 6, with the plan that they would be distributed to D.C. protesters by a “quick reaction force” in case of armed conflict.

Perhaps most damningly, the government revealed the contents of private communications between Rhodes and others he presumed to be Trump confidants, where he demanded they pressure the defeated president to overturn the election.

In a private chat titled “Friends of [Roger] Stone,” Rhodes browbeat other participants over what he saw as Trump’s dithering, at one point writing: “So will you step up and push Trump to FINALLY take decisive action? That’s what we must do now. And then if he still refuses to do his duty, we will still have to do ours.”

In a parking-lot meeting in Virginia in the days following Jan. 6, Rhodes typed a message for Trump into the phone of a man who he believed to be in contact with the then-president, in which he appeared to offer militia protection for a virtual coup.

“You must use the Insurrection Act and use the power of presidency to stop him. All us veterans will support you,” Rhodes wrote.

The purported intermediary – military veteran and software developer Jason Alpers – surreptitiously recorded their meeting, and later passed it not to Trump, but the FBI. In the recording, which was played in court, Rhodes was heard to say of the Capitol riot, “If [Trump is] not going to do the right thing and he’s just gonna let himself be removed illegally then we should have brought rifles.” Rhodes said, “We should have fixed it right then and there. I’d hang fucking Pelosi from the lamppost.”

In an unusual move for a criminal defendant, Rhodes elected to take the stand himself. In his testimony, he cut loose the Oath Keepers who had entered the Capitol, claiming that they had acted on their own account, and that “there was no plan to enter the building for any purpose.”

The gambit failed and opened him up to cross-examination. Prosecutors probed Rhodes about texts he sent on Jan. 6 encouraging members to come to the Capitol, calling pro-Trump demonstrators inside the building “actual patriots” and, at the end of the bloody day, promising supporters, “You ain’t seen nothing yet.”

The convictions of Rhodes and Meggs were the first in almost three decades to apply an 1861 law drafted in response to pro-slavery Civil War secessionists. During their three-day deliberation, jurors asked the judge for clarification of some aspects of the little-used statute.

The trial was perhaps the most high-profile so far among dozens involving Jan. 6 rioters. So far, according to the Associated Press, Department of Justice officials have charged at least 912 and delivered 492 convictions, with 410 pending trials.

The upcoming trials include those of Proud Boys leaders Enrique Tarrio, Ethan Nordean, Joseph Biggs, Zachary Rehl and Dominic Pezzola, who also face the charge of seditious conspiracy. Their proceedings are scheduled to begin next month.

Stewart Rhodes founded the Oath Keepers in April 2009, just months after the inauguration of President Barack Obama. He began his political activity as a devotee of Ron Paul’s brand of libertarianism, and after Obama took office, Rhodes showed implacable hostility toward him throughout his presidency. When Donald Trump was elected in November 2016, Rhodes supported him with increasingly obsequious and fanatical devotion.

The Oath Keepers’ stated purpose was to safeguard Americans from unconstitutional government overreach. In practice, the group dedicated itself to propping up far-right figures and causes, particularly in the antigovernment movement.

Rhetorically, Rhodes tried to position the organization as a more measured, qualified, legitimate successor to the 1990s militia movement.

To that end, the Oath Keepers’ recruiting efforts were aimed at current and former military members, law enforcement officers and others who have taken a constitutional oath. A catastrophic 2021 data breach that revealed membership and financial details showed that those efforts had met with some success.

Though the Oath Keepers ran under Rhodes’ overall leadership at a national level, members were also organized into state and local chapters. Conflicts between local leaders and the mercurial Rhodes saw entire chapters break away from the national organization throughout the organization’s history.

In April 2021, Arizona’s Jim Arroyo, then vice president of the largest Oath Keepers chapter in the country, told reporters that his group would split from the national organization.

At that time, Arroyo reportedly remarked of Jan. 6, “I wanna congratulate Stewart Rhodes and his ten militia buddies for winning first place in the ultimate dumbass contest, 'cause that’s what it was.” The chapter changed its name to Yavapai County Preparedness Team, but it still operates as an antigovernment militia.

Despite the ostensible split, Arroyo’s group continues to wear Oath Keepers uniforms and refer to themselves as Oath Keepers. Arroyo makes speeches in front of an Oath Keepers flag, and the organization’s online presence indicates their ambition to grow and perhaps absorb remnant Oath Keepers chapters in Arizona and beyond.

Other chapters in Virginia and North Carolina broke off from the national organization in the lead-up to Jan. 6. These groups offered a variety of justifications for their defections, but courtroom accounts of Rhodes’ insurrectionary rhetoric raise questions about whether some shared Arroyo’s skepticism about the wisdom of their election denial strategy.

Following the guilty verdict, it’s not clear whether the Oath Keepers can survive as an organization in the absence of their authoritarian, conspiracy-minded and violent leader.

Adams, Rhodes’ son, offered a poor prognosis for the organization without Rhodes at its helm.

Had his father been acquitted, he wrote, “I think there was serious potential for Oath Keepers to reassemble and reignite.”

“That is now dead,” Adams said, “but a lot of smaller groups are continuing on in crazy land on their own.”