A 12-person Washington, D.C. jury convicted four members of the antigovernment Oath Keepers group of seditious conspiracy on Monday over their role in the riot at the U.S. Capitol on Jan. 6, 2021.

Joseph Hackett of Sarasota, Florida; Roberto Minuta of Prosper, Texas; David Moerschel of Punta Gorda, Florida; and Edward Vallejo of Phoenix, Arizona were all found guilty of seditious conspiracy. The four were also found guilty of obstructing an official proceeding of Congress, obstruction of an official proceeding of Congress, and conspiring to obstruct an officer from discharging duties. Hackett was convicted of tampering with evidence while Minuta and Moerschel were acquitted of that charge. Hackett and Moerschel were acquitted of destroying government property.

The verdicts culminated the second of three major seditious conspiracy trials arising from the events of Jan. 6.

A November 2022 verdict convicted Oath Keepers founder and leader, Elmer Stewart Rhodes, and Floridian Oath Keeper Kelly Meggs of the same charge, and found them and three other members of the group guilty on lesser charges.

The trial of five members of the Proud Boys hate group on the same charge is ongoing.

The 14 defendants in three separate trials faced prosecution on the rarely used Civil War-era sedition law – which carries a penalty of up to 20 years in prison. They are among more than 950 people charged following the assault on the Capitol, during which four people died, along with five police officers who died later of various causes. 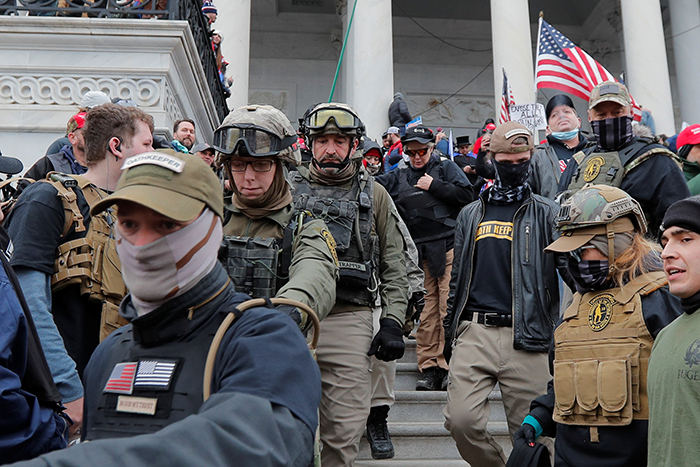 Hackett, Minuta, Moeschel and Vallejo were charged together with the defendants in the earlier trial, and were alleged to be involved in the same conspiracy, but U.S. District Judge Amit Mehta divided the defendants between two trials due to space limitations and COVID-19 concerns.

None of the men convicted Monday played significant leadership roles in the organization, and just as in the earlier trial, Stewart Rhodes's pronouncements on imminent "civil war" in the case of Joe Biden assuming the presidency were central to the prosecution.

But jurors heard about how their actions on Jan. 6 indicated that they intended to execute the conspiracy that Rhodes and others formulated.

Minuta entered the Capitol building at the head of a group of Oath Keepers and clashed violently with police.

Hackett and Moerschel also led groups into the building, and all three came to the area clad in tactical gear.

Brian Ulrich – one of several Oath Keepers already convicted on guilty pleas who testified against the defendants – told the jury that he and other members entered the Capitol in order to prevent the certification of Joe Biden's election, remarking that there was "no other reason to go into that building at that point."

Caleb Berry, another former Oath Keeper who made a plea agreement to cooperate with prosecutors on his own earlier conspiracy charges flatly told jurors that "we were going to try to stop the vote count."

The men's co-defendant, Vallejo, meanwhile, played his part by hanging back at a hotel in Northern Virginia with a firearms stash, acting as a so-called "quick reaction force" who could ferry the weapons across the Potomac to the Capitol in case Oath Keepers leadership deemed armed conflict with police or government forces to be necessary.

Prosecutors described the men's "perverted version of American history" to the jury, and in closing the government's case, Assistant U.S. Attorney Louis Manzo told jurors that “January 6 was just a battle. The full conspiracy was to stop the transfer of power."

Judge Mehta set no sentencing date, but ordered the men to await that decision on 24-hour house arrest.

Stewart Rhodes founded the Oath Keepers in April 2009, weeks after the inauguration of President Barack Obama. Rhodes was implacably hostile to Obama throughout his presidency.

When Donald Trump was elected in November 2016, Rhodes supported him with increasingly obsequious devotion.

The Oath Keepers’ stated purpose was to safeguard Americans from unconstitutional government overreach. In practice, the group dedicated itself to propping up far-right figures and causes, particularly in the antigovernment movement.

Rhetorically, Rhodes tried to position the organization as a more measured, qualified, legitimate successor to the 1990s militia movement.

The group's recruiting efforts were aimed at current and former military members, law enforcement officers and others who have taken a constitutional oath. A catastrophic 2021 data breach that revealed membership and financial details showed that those efforts had met with some success.

Though the Oath Keepers ran under Rhodes’s overall leadership at a national level, members were also organized into state and local chapters. Conflicts between local leaders and the mercurial Rhodes saw entire chapters break away from the national organization throughout the organization’s history.

Monday's verdict is another blow to an organization whose continued existence is an open question.