Hundreds of Filipino guestworkers lured to teach in Louisiana public schools were cheated out of tens of thousands of dollars and forced into exploitative contracts by an international trafficking ring run by labor contractors, according to a class action lawsuit filed today by the Southern Poverty Law Center (SPLC), the American Federation of Teachers (AFT) and Covington & Burling LLP.

Hundreds of Filipino guestworkers lured to teach in Louisiana public schools were cheated out of tens of thousands of dollars and forced into exploitative contracts by an international trafficking ring run by labor contractors, according to a class action lawsuit filed today by the Southern Poverty Law Center (SPLC), the American Federation of Teachers (AFT) and Covington & Burling LLP.

The federal lawsuit was filed on behalf of more than 350 Filipino teachers working in Louisiana under the federal H-1B guestworker program. It accuses officials of two labor contractors – Universal Placement International, based in Los Angeles, and its sister organization, Manila-based PARS International Placement Agency – of human trafficking, racketeering and fraud. The suit also names the East Baton Rouge Public School System, several school district officials and a California lawyer, Robert Silverman, based on their roles in the fraudulent trafficking scheme.

"The outrageous conduct by the companies that recruited these teachers and those who assisted them in carrying out their scheme is part of a larger pattern of exploitation that we've documented in guestworker programs," said SPLC Legal Director Mary Bauer, author of the 2007 report Close to Slavery: Guestworker Programs in the United States. "It's clear that the very structure of the program lends itself to pervasive worker abuse. Guestworker programs should not be the model for immigration reform." 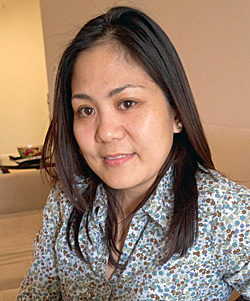 Mairi Nunag-Ta&#241;edo is one of hundreds of teachers recruited from the Philippines to teach in Louisiana public schools.

The teachers began arriving in the United States in 2007 after each paid about $16,000, several times the average household income in the Philippines, to obtain the jobs. The H-1B guestworker program, administered by the Department of Labor, permits foreign nationals with special skills to work in the United States for a period of up to six years.

"These teachers have been victimized in ways reminiscent of the worst abuses students learn about in history class: labor contracts signed under duress and arrangements that remind us of indentured servitude," said AFT President Randi Weingarten. "The goal of this lawsuit is to put an end to this exploitation, which should have no place in 21st-century America."

Nearly all the teachers had to borrow money to pay the recruiting fees; the recruiters referred them to private lenders who charged 3 to 5 percent interest per month. Teachers were forced to pay these exorbitant fees because they had already made substantial financial investments that would not be returned and because the recruiters confiscated their passports and visas until they paid. The teachers were also forced to sign away an additional 10 percent of the salaries they would earn during their second year of teaching. Teachers who resisted signing the contracts were threatened with being sent home and losing the thousands they had already paid. The recruiters also charged fees for arranging substandard housing and threatened teachers who complained or sought to move to a new location.

Ingrid Cruz said she and the other teachers were deceived into selling property, resigning from jobs, borrowing money and leaving behind children and friends in search of a more secure future. "We were herded into a path, a slowly constricting path, where the moment you feel the suspicion that something is not right, you're already way past the point of no return," Cruz said. She added that the teachers consider Louisiana their home and have a strong commitment to the state's children.

Under the guestworker program, workers facing exploitation generally must either continue working for the employer that brought them to the United States or return home. Because they often are left deeply in debt from exorbitant recruiting fees, they typically have little choice but to remain on the job.

"These teachers thought they were buying a piece of the American dream but instead were put in a nightmarish financial bind by labor contractors who operated a fraudulent trafficking scheme," said Dennis Auerbach, an attorney with Covington & Burling LLP in Washington, D.C. "They've bravely come forward to correct this injustice and expose the abuses that many other guestworkers are undoubtedly also facing."

In a 2009 report, the AFT called on federal, state and local governments to take more vigorous action to monitor the hiring of migrant teachers by U.S. school districts. Among the steps needed is the adoption and enforcement of ethical standards for international recruitment of teachers, as well as better access to government data needed to track and study international hiring trends.