A community in northern Idaho is celebrating the 10th anniversary of the Southern Poverty Law Center's courtroom victory over the Aryan Nations, a violent neo-Nazi group whose compound served as an organizing hub for leading white supremacists.

A community in northern Idaho is celebrating the 10th anniversary of the Southern Poverty Law Center's courtroom victory over the Aryan Nations, a violent neo-Nazi group whose compound served as an organizing hub for leading white supremacists.

The verdict was commemorated on September 7 with the presentation of a black marble monument outside the Kootenai County Courthouse in Coeur d'Alene, honoring the SPLC, the jury and a philanthropist who played a role in the community's recovery.

The SPLC lawsuit, filed on behalf of a mother and son who were terrorized by Aryan Nations guards, led to a $6.3 million verdict that crippled the group, forcing it to give up the compound near Hayden Lake. 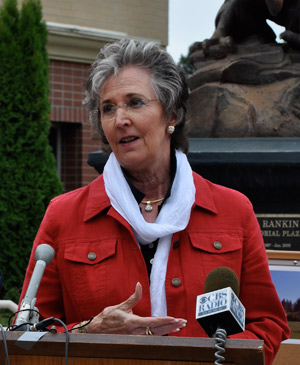 "It was like lifting a cloud from the area," said Tony Stewart, a founding member of the Kootenai County Task Force on Human Relations, which organized the ceremony. "The SPLC and Morris Dees are great heroes to us."

Aryan Nations leader Richard Butler was a former aerospace engineer who sought to create a whites-only homeland in the Pacific Northwest. He was a father figure to the American neo-Nazi movement who, for years, remained unscathed by the crimes committed by those around him. His good fortune would come to an end following the attack on Victoria Keenan and her 19-year-old son, Jason.

Butler's 20-acre compound had long been the site of the Aryan World Congress, an annual event that attracted extremists from virtually every sector of the radical right: neo-Nazis, skinheads, tax protesters, survivalists, Klansmen, militia organizers and others.

It was also home to the Church of Jesus Christ Christian, where Christian Identity theology – the spiritual arm of the Aryan Nations – was preached and led by Butler. The strange religious doctrine depicts whites as God's chosen people and Jews as the literal descendants of Satan.

"For more than two decades, the Aryan Nations was one of the country's most violent white supremacist groups," said Morris Dees, who led the SPLC's legal team. "They brought together the worst elements of the radical right, inspiring hate and violence that was felt across the nation."

A violent history
In the 1980s, Aryan Nations followers helped form a terrorist group called The Order, whose crimes ranged from heisting more than $4 million from armored cars to assassinating Alan Berg, a Jewish talk radio host in Denver.

Because of his landmark courtroom victories against hate groups, Dees' name was at the top of the group's hit list. But tight security surrounding the Alabama lawyer dissuaded the group from launching an attack.

During the 1990s, members of the Aryan Republican Army, a group with close ties to the Aryan Nations, carried out more than 20 bank robberies to fund a white supremacist revolution.

When a journalist questioned Butler about Furrow's attack, the Aryan Nations founder responded: "I don't favor hurting children, but I can't get worked up about the wounding of some of my enemies, even though they're children." 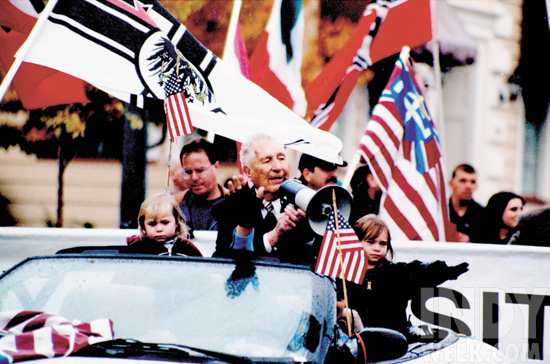 Richard Butler dreamed of presiding over a "white homeland" in the Pacific Northwest.

'He looked like the devil'
On the night of July 1, 1998, Victoria Keenan and her son were returning from a wedding when they stopped along the road outside the Aryan Nations compound. They pulled over so Jason could retrieve the wallet he had accidentally dropped out the car window. As they drove away, the car backfired.

To the ears of the security guards at the compound, the noise was the sound of their enemies launching the attack that Butler had warned about. Three guards leaped into a pickup truck and chased after the Keenans, firing their weapons.

Victoria Keenan could feel the bullets smashing into the back of her car. "I remember looking at my son's face, looking down at him on the floor of the car, and just praying to God that they would leave him alone and take me," she said. "I really thought we were going to die."

A bullet hit a rear tire, and the vehicle careened into a ditch. A guard grabbed Victoria by the hair, pulled her from her car, put a gun to her head and threatened to kill her.

"He looked like the devil," she said. "At the time, his head was shaved, and his eyes, the way he glared at me, it was like I picture the devil. Something about those eyes was just evil, mean. He had ‘kill' in his eyes."

Her tormentors demanded to know if she was a Native American. She was forced to denounce her heritage to survive, telling the guards she was just a poor, white farm girl. "It just made me feel degraded. I said, ‘I'm on your guys' side.'"

The attack ended as a car approached. One of the guards warned the Keenans not to talk about the incident. As they left, they did something that Victoria would never forget.

"They lined up military style, one behind the other and jumped up on the back of the pickup truck," she said. "They gave that Hitler salute and sped off."

A lawsuit and a plot
The SPLC filed suit against the Aryan Nations and Butler in January 1999 to hold the group and its leadership accountable for the attack. It was a legal strategy Dees and the SPLC had earlier honed in lawsuits against other hate groups, including the White Aryan Resistance in California, the United Klans of America in Alabama and the Christian Knights of the Ku Klux Klan in South Carolina. The SPLC won large jury verdicts against these groups without accepting any legal fees from its clients. 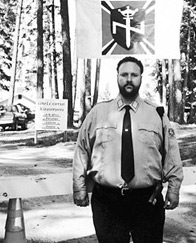 "White supremacist groups throughout the country hated Dees, and privately many expressed the view that the assassination of Dees would be the greatest achievement any white supremacist could accomplish," Hall wrote.

Based on Hall's information, authorities arrested the would-be assassin on April 14, 1999, the day before he planned to a board a bus. The plan was for Dees' murder to roughly coincide with the April anniversaries of the Oklahoma City bombing, Adolf Hitler's birthday and the fiery end of the Branch Davidian siege in Waco, Texas. The suspect was convicted and sent to prison on various firearms charges.

Hate on trial
The trial began in late August 2000 under tight security. Sharpshooters kept watch on the courthouse from nearby rooftops. Undercover FBI agents roamed the area as tattooed, flag-waving Aryans prowled the streets. 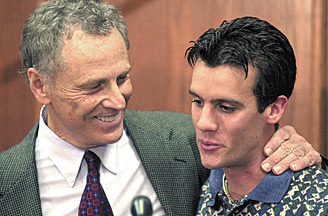 "Butler uses white-hot words to get his followers to pick up the gun for the white race," Dees told the jury.

Instead of taking reasonable precautions, Butler allowed the guards to carry weapons and filled their heads with hate.

Expert testimony showed that the harrowing experience left the Keenans with post-traumatic stress disorder, a condition often associated with "shell-shocked" war veterans. Victoria was tortured by the memory of a guard's face.

"She cries for no reason," Dees told the jury. "She has nightmares."

Butler's lawyer argued that the guards were drunk and acted on their own when they attacked the Keenans. It was an argument that contradicted the organization's own handbook, which described the Aryan Nations as a "disciplined, coordinated, monolithic hierarchy with all authority emanating from leader-pastor Richard Butler." 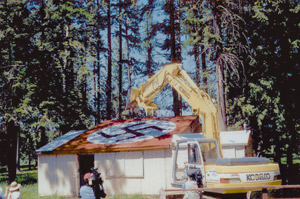 A building on the Aryan Nations compound is destroyed following the legal victory over the Richard Butler-led hate group.

Butler was forced to turn over his compound to the Keenans. They sold it to a philanthropist who allowed firefighters to torch the buildings on the land for a training exercise. Once the debris was cleared, the property was given to the North Idaho College Foundation. The land has been used as an outdoor laboratory for classes.

‘One of the greatest battles'
Shortly after the verdict, the Northwest Coalition for Human Dignity honored the Keenans.

"It hasn't been easy; it never will be," Jason Keenan said. "We're proud to be in one of the greatest battles there ever can be, and that's the battle against injustice, against racism, against violence."