Undocumented women who are feeding the country with their labor routinely endure sexual harassment, wage theft and other abuses, according to a new report released today by the Southern Poverty Law Center (SPLC).

Undocumented women who are feeding the country with their labor routinely endure sexual harassment, wage theft and other abuses, according to a new report released today by the Southern Poverty Law Center (SPLC).

The report — Injustice on Our Plates: Immigrant Women in the U.S. Food Industry — documents the workplace experiences of immigrant women who have come to the United States to escape crushing poverty. It describes how the laws that are in place to protect them from exploitation are grossly inadequate and how they are typically powerless to protect themselves.

The report's release coincides with the 50th anniversary of Edward R. Murrow’s documentary “Harvest of Shame,” which chronicled the plight of migrant farmworkers. CBS broadcast the documentary on Thanksgiving in 1960.

“These women are the backbone of the food industry but are exploited and abused in ways that most of us can’t imagine and that none of us should tolerate,” said SPLC Legal Director Mary Bauer, co-author of the report. “Fear keeps these women silent, so their suffering is invisible to all of us who benefit from their labor every time we sit down at the dinner table.”

The report is based on extensive interviews with 150 immigrant women from Mexico, Guatemala, and other Latin American countries. They live and work in states across the country. All have worked in the fields or factories that produce food for America.

Many of the women interviewed for the report said the threat of deportation and the possible destruction of their families keeps them from reporting workplace abuses — even when it means enduring sexual harassment and other indignities.

“It’s because of fear [that] we have to tolerate more,” said one 26-year-old Florida farmworker interviewed for the report. “Sometimes they take advantage because we don’t have papers. They mistreat us, and what can we do? Where would we go?”

Many workers described keeping track of the wages they had earned only to discover a far smaller amount in their paychecks. Some said they were not paid at all for work they performed. Sexual harassment and even brutal sexual assaults by male co-workers and supervisors were also a constant threat for many of these women. Some saw it as a danger that simply must be tolerated for a day’s pay. Many are reluctant to report sexual assaults and other crimes to police for fear of being deported.

Farmworkers remain the least protected workers in America. They were intentionally excluded from nearly all major federal labor laws passed during the New Deal era. Though some laws have been amended since then, many exemptions remain. They are not entitled to overtime pay under federal law, for example. On smaller farms and in short harvest seasons, they are not even entitled to the federal minimum wage. In addition, farmworkers are not covered by workers’ compensation laws in many states and are excluded from many state health and safety laws.

The report concludes that wholesale reforms at the federal level are needed to protect these workers. These reforms include a path to citizenship for the undocumented workers who are feeding the country with their labor. Reforms also must include stronger worker protections — for all workers, whether they labor in the field or in the factory, and whether they have legal status or not.

“For these women, workplace exploitation is the rule — not the exception,” said Mónica Ramírez, coauthor of the report and director for Esperanza: The Immigrant Women’s Legal Initiative of the SPLC. “Virtually every American relies on their labor. It is our responsibility to stop their abuse.” 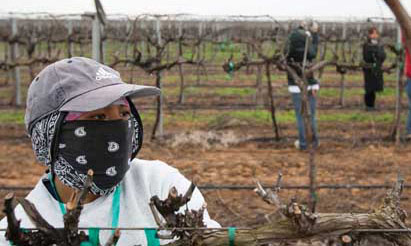 Farmworker women
often cover their
faces with bandanas
to protect
themselves from
pesticides and the
weather, but also to
ward off unwanted
sexual advances.

Facts About Immigrant Women Working in the U.S. Food Industry

Undocumented women are among the most vulnerable workers in our society today. They fill the lowest paying jobs in our economy and provided the backbreaking labor that helps bring food to our tables. Yet they are routinely cheated out of wages and subjected to an array of other abuses in the workplace. They are generally powerless to enforce their rights or protect themselves. The following are facts from the SPLC report Injustice on Our Plates.

Sexual Abuse On the Job

11 Also, in most Southern states, either there is no state minimum wage or farmworkers are expressly excluded from coverage.