Gays and lesbians are far more likely to be victims of a violent hate crime than any other minority group in the United States, according to a new analysis of federal hate crime statistics in the latest issue of the Southern Poverty Law Center’s Intelligence Report, released today.

Gays and lesbians are far more likely to be victims of a violent hate crime than any other minority group in the United States, according to a new analysis of federal hate crime statistics in the latest issue of the Southern Poverty Law Center’s Intelligence Report, released today.

The SPLC’s analysis of 14 years of hate crime data found that gays and lesbians, or those perceived to be gay, are more than twice as likely to be attacked in a violent hate crime as Jews or blacks; more than four times as likely as Muslims; and 14 times as likely as Latinos. The findings are based on FBI hate crime statistics from 1995 to 2008, the period for which there is complete data. The basic pattern also holds true in individual years. 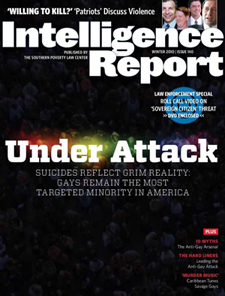 The analysis is being released to coincide with the scheduled release of the FBI’s hate crime statistics for 2009.

These findings come as a wave of anti-gay attacks have washed across the country. In New York, for example, 10 suspects were arrested for brutally torturing three gay victims. And in Covington, Ky., a neighborhood was hit by a series of violent anti-gay attacks. Most dramatically, four teenagers committed suicide in September after being bullied, taunted or outed as gay.

This analysis of hate crime data can be found in the Winter 2010 issue of the Intelligence Report, which also explores how the hard-core anti-gay movement in America is becoming more extreme in the face of gay rights advances.

“As Americans become more accepting of LGBT people, the most extreme elements of the anti-gay movement are digging in their heels and continuing to defame gays and lesbians with falsehoods that grow more incendiary by the day,” said Mark Potok, editor of the Intelligence Report. “The leaders of this movement may deny it, but it seems clear that their demonization of gays and lesbians plays a role in fomenting the violence, hatred and bullying we’re seeing.”

Even after the recent string of teen suicides, which brought national attention to the issue of anti-gay bullying, leaders of these groups blamed those seeking to protect students from bullying.

Eighteen anti-gay groups are profiled in the Winter 2010 issue, which also contains an article debunking 10 key claims spread by the anti-gay movement to demonize LGBT people. These claims – ranging from the myth that gays and lesbians don’t live nearly as long as heterosexuals to the utterly bizarre claim that gays helped orchestrate the Holocaust – are examined in detail.

Anti-gay “murder music,” a style of music that features lyrics advocating the murder of gays and is growing in popularity far beyond its native Jamaica, is also described. The music has sparked an effort by gay and lesbian activists in Jamaica and throughout the Western world to stop its growth.

The law enforcement edition of Intelligence Report, which is being sent to about 55,000 officers, also contains a training DVD to help officers recognize the threat when dealing with extremists from the “sovereign citizens” movement. This past May, two officers in West Memphis, Ark., were murdered when they stopped two sovereigns.