A Latino man who suffered broken bones in his face when he was arrested and beaten by police officers during a traffic stop in Georgia last year will receive compensation under the settlement of a federal civil rights lawsuit, the Southern Poverty Law Center announced today.

A Latino man who suffered broken bones in his face when he was arrested and beaten by police officers during a traffic stop in Georgia last year will receive compensation under the settlement of a federal civil rights lawsuit, the Southern Poverty Law Center announced today.

"No amount of money can ever make up for the blatant violations of our client's constitutional and civil rights or the injuries he suffered," said SPLC Legal Director Mary Bauer." But we hope this settlement sends a clear message that these types of abuses won't be tolerated."

The SPLC and its co-counsels – the National Immigration Project of the National Lawyers Guild and civil rights attorney Brian Spears – filed suit against the officers in August on behalf of Angel Francisco Castro-Torres. 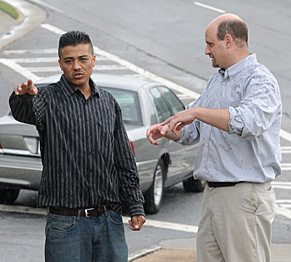 In March 2010, Castro was riding his bicycle in Smyrna, Ga., when he was stopped by Cobb County police officers Jeremiah M. Lignitz and Brian J. Walraven. According to their own account, the two officers stopped Castro after observing his race. The suit alleged that the officers immediately demanded Castro's identification, questioned his immigration status and beat him during the arrest. Castro suffered a broken nose and eye socket.

The settlement is expected to cover Castro's medical expenses. Castro required surgery to repair damage to his eye.

After being held for four months in the Cobb County Jail, Castro was released when the two officers named in the lawsuit failed to appear at a hearing regarding the charges.

According to the lawsuit, the officers attempted to cover up the attack by transporting Castro to the Cobb County Jail, which has a 287(g) agreement with the Department of Homeland Security. Under that program, in place in Cobb County since 2007, local law enforcement officials are empowered to enforce federal immigration law. Arrested individuals are checked for their immigration status and then can be turned over to immigration officials.

"This program allows certain individuals to be targeted based on race," Bauer said. "It then uses trumped-up charges to funnel them into the immigration system – all while ignoring their constitutional and civil rights."

Despite the DHS's recent attempts to reduce such racial profiling, a report released by the department's inspector general identified ongoing and alarming problems with the 287(g) program, including few protections against racial profiling and other civil rights abuses.