The Georgia law authorizes police to demand "papers" demonstrating citizenship or immigration status during traffic stops, criminalizes Georgians who interact with undocumented individuals, and makes it unjustifiably difficult for individuals without specific identification documents to access state facilities and services. The lawsuit charges that the law endangers public safety, invites the racial profiling of Latinos, Asians and others who appear foreign to an officer, and interferes with federal law. 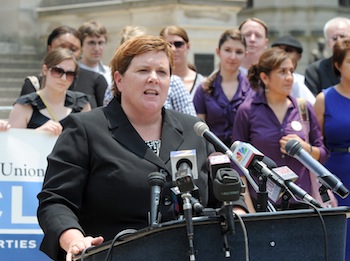 SPLC legal director Mary Bauer speaks at a press conference in front of the Georgia State Capitol in Atlanta, Ga. on June 2, 2011.

"This law undermines our core American values of fairness and equality," said Mary Bauer, legal director of the Southern Poverty Law Center. "By perpetuating the hate rhetoric that has become commonplace among many elected officials, this law threatens the rights of citizens and non-citizens alike by encouraging racial profiling. Sadly, too, it places Georgia on the wrong side of history."

The lawsuit charges that Georgia's law, HB 87, is unconstitutional because it interferes with federal authority over immigration matters, in violation of the supremacy clause of the U.S. Constitution; authorizes and requires unreasonable seizures and arrests in violation of the Fourth Amendment; restricts the constitutional right to travel freely throughout the United States; and violates the equal protection and due process clauses of the Constitution by unlawfully discriminating against people who hold certain kinds of identity documents.

One of the plaintiffs in the case, Paul J. Edwards, is a devout Christian and a board member of a local faith group who strongly believes in helping all individuals in his community regardless of their immigration status. As part of his religious commitment, Edwards transports people, including those who are undocumented, to places of worship and to locations that provide medical assistance. Under the Georgia law, he would be subject to criminal liability for assisting, transporting and harboring undocumented individuals.

Another plaintiff, Paul Bridges, is a longtime supporter of the Republican Party and is the mayor of Uvalda, Georgia, a town of about 600 people in Montgomery County. Because he speaks Spanish and is a well-known presence in the community, he often assists with interpretation in schools, doctors' offices, courts and other settings. He also provides transportation to undocumented individuals so they can go to church, the grocery store, doctors' appointments and soccer tournaments in nearby towns. If the Georgia law goes into effect, Bridges and the undocumented individuals traveling with him will be at risk of criminal prosecution.

Georgia is the third state to enact legislation emulating Arizona's controversial and costly SB 1070, even though the Arizona law has been blocked by the courts. Utah and Indiana passed similar laws earlier this year. After a lawsuit filed by the ACLU and NILC, a federal district court last month put Utah's law on hold pending further review. The ACLU and NILC also challenged Indiana's law last month.

The lawsuit was filed in the U.S. District Court for the Northern District of Georgia on behalf of civil rights, labor, social justice and faith-based organizations, including the Georgia Latino Alliance for Human Rights, Service Employees International Union, the Southern Regional Joint Board of Workers United, Alterna, the Coalition of Latino Leaders, the Task Force for the Homeless, DreamActivist.org, Instituto de Mexico, the Coalition for the People's Agenda, the Asian American Legal Advocacy Center, individually named plaintiffs who would be subject to harassment or arrest under the law, and a class of similarly situated people. 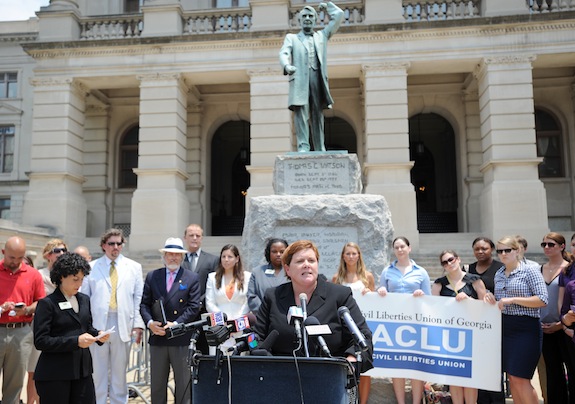 SPLC legal director Mary Bauer and representatives from other organizations involved in Paul J. Edwards, et. al. v. State of Georgia gather at a press conference in front of the Georgia State Capitol in Atlanta, Ga. on June 2, 2011.