A decade after the Sept. 11, 2001, terrorist attacks, a second wave of anti-Muslim hatred is being propelled by a small cadre of activists who are exploiting Americans' fears of Islamic extremism, according to the latest issue of the Southern Poverty Law Center's Intelligence Report, released today.

A decade after the Sept. 11, 2001, terrorist attacks, a second wave of anti-Muslim hatred is being propelled by a small cadre of activists who are exploiting Americans' fears of Islamic extremism, according to the latest issue of the Southern Poverty Law Center's Intelligence Report, released today.

In the wake of this hysteria, anti-Muslim hate crimes have been reported across the country, protests have been launched against mosques, and lawmakers in more than a dozen states have introduced legislation to ban the use of Islamic religious law, called Shariah, in the U.S. legal system – a completely unfounded fear. 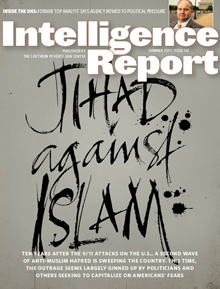 "We've seen a remarkable resurgence of anti-Muslim hatred around the country," said Mark Potok, editor of the Intelligence Report. "Unlike the first and far more understandable wave that followed the Sept. 11 attacks, however, this one was largely ginned up by politicians and commentators pandering for votes and ratings. It's been a despicable exercise in Muslim-bashing for personal benefit. While there are legitimate concerns about terrorism, the rhetoric we've been hearing aims to demonize all Muslims."

This issue of Intelligence Report also includes an interview with former Department of Homeland Security (DHS) analyst Daryl Johnson, who says that the department has effectively gutted a unit that analyzed the terrorism threat from right-wing extremists. That action came in response to a 2009 DHS  report on domestic extremism that was wrongly criticized as tarring all conservatives as potential terrorists. Johnson, who describes himself as a conservative Republican, was the principal author of that report.

The cover story, titled "Jihad Against Islam," recounts recent incidents that strongly suggest a spike in anti-Muslim hate crimes. In May 2010, for instance, a bomb exploded at an Islamic center in Jacksonville, Fla. In August, a man slashed the neck and face of a New York taxi driver after finding out he was a Muslim. Four days later, someone set fire to construction equipment at the future site of an Islamic center in Murfreesboro, Tenn. This March, a radical Christian pastor burned a Koran in Gainesville, Fla., leading to deadly riots in Afghanistan that left at least 20 people dead.

At the heart of this vilification of Muslims – a group that comprises less than 1 percent of the U.S. population – have been activists such as Pamela Geller, co-founder of the anti-Muslim hate group Stop Islamization of America. Geller led the protest against a proposed Islamic cultural center in New York City, deriding it as a 9/11 "victory mosque" that would be two blocks from the site of the former World Trade Center. Geller is one of 10 anti-Muslim hardliners profiled in this issue of Intelligence Report.

Politicians have added fuel to the fire. At the state level, legislators have stoked unfounded fears of Shariah law infiltrating U.S. courts. At the national level, U.S. Rep. Peter King of New York last week held the second of his controversial hearings on the radicalization of American Muslims. King has said there are "too many mosques" in America, claiming without evidence that 80 to 85 percent of mosques are controlled by fanatical extremists. Similarly, last August, U.S. Rep. Louie Gohmert of Texas took to the floor of Congress to warn of Muslim women being brought to the United States to birth terrorists, though he was unable to provide evidence of such a plot.

The first wave of anti-Muslim sentiment that occurred after the 2001 terrorist attacks was effectively tamped down by President George W. Bush's efforts to make clear that terrorism, not Islam or Muslims in general, was the nation's enemy. That effort by a conservative president, coupled with military action in Iraq and Afghanistan – actions that Americans may have considered an adequate response to the terrorist attacks – largely neutralized efforts to demonize Muslims in the United States.