The class action lawsuit charges the immigration law is unconstitutional on multiple grounds. It will subject residents of Alabama – including countless U.S. citizens and non-citizens with permission to be in the United States – to racial profiling as well as unlawful interrogations, searches, seizures and arrests that violate the Fourth Amendment.

The filing of the lawsuit was announced at the Civil Rights Memorial Center in downtown Montgomery, where the SPLC’s office is located. 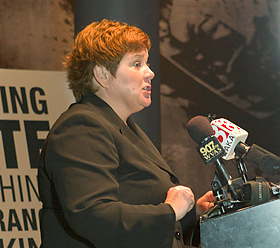 SPLC Legal Director Mary Bauer speaks to the media after announcing the federal lawsuit challenging Alabama’s anti-immigrant law. The state's law is the most extreme in the nation.

The lawsuit also charges that the law’s provisions regarding education will deter children from immigrant families from enrolling in public schools and will bar many non-citizens lawfully within the country from attending public colleges or universities in Alabama. These provisions violate the Equal Protection Clause of the U.S. Constitution and are contrary to U.S. Supreme Court precedent. Other provisions deny individuals access to the state’s judicial system due to their immigration status – depriving them of due process guaranteed by the Constitution.

Alabama’s anti-immigrant law, which is the fifth such state law to pass, is the most extreme in the nation. So far, none of these discriminatory state laws have been fully implemented due to legal challenges.

“Alabama has brazenly enacted this law despite the clear writing on the wall: Federal courts have stopped each and every one of these discriminatory laws from going into effect,” said Cecillia Wang, director of the ACLU Immigrants’ Rights Project. “Local Alabama communities and people across the country are shocked and dismayed by the state’s effort to erode our civil rights and fundamental American values.”

The lawsuit was filed in the U.S. District Court for the Northern District of Alabama on behalf of several organizations and individuals across the state that will be adversely affected by the law. The coalition includes the Southern Poverty Law Center, the American Civil Liberties Union, the ACLU of Alabama, the National Immigration Law Center, the Asian Law Caucus and the Asian American Justice Center.

Plaintiff Matt Webster and his wife are in the process of adopting two boys. These children do not have current immigration status and Webster will not be able to obtain lawful status for the children until two years after the adoption process has been completed. Alabama’s immigration law will criminalize these children and make it illegal for Webster to transport and provide for them.

“I will be considered a criminal for harboring, encouraging and transporting my own sons,” Webster said. “I am furious that our state representatives have wasted and will continue to waste taxpayer money with this law. I am a Republican and probably agree with many of our Republican legislators on most issues. On this one, however, I do not.”

The law has also raised concerns of faith-based organizations that assist individuals.

“Today, our mission and the missions of many religious groups across Alabama have been made impossible by the recently enacted Alabama immigration law,” said Scott Douglas, executive director of Greater Birmingham Ministries, a plaintiff in the lawsuit. “This law interferes with the free exercise of religion. It violates core values of various faiths because it criminalizes acts of love and hospitality – commandments from our God of many names.”

Other agencies that work with immigrant communities are concerned the law may criminalize their work.

“We are fearful that HB 56 will lead to another era in this state of racial profiling and discrimination and foster hate and separation, rather than welcoming and community-building,” said John Pickens, executive director for Alabama Appleseed Center for Law and Justice, a plaintiff in the lawsuit. “What we need is a comprehensive national immigration policy. Our state legislative leaders, and Governor Bentley, should be urging our congressional representatives in Washington to support comprehensive immigration reform, rather than spending time passing and trying to enforce piecemeal state immigration laws.”

The Hispanic Interest Coalition of Alabama, a social service organization that works with the Latino community, joined the lawsuit because of the damage the law will inflict across the state.

“If implemented, HB56 will cause irreparable harm to Alabama’s reputation, to the vitality of our economy, and to the well-being of hardworking immigrant families that HICA works daily to engage and empower,” said Isabel Rubio, executive director of the coalition. “With no other recourse remaining, HICA must join this lawsuit to stop HB 56.” 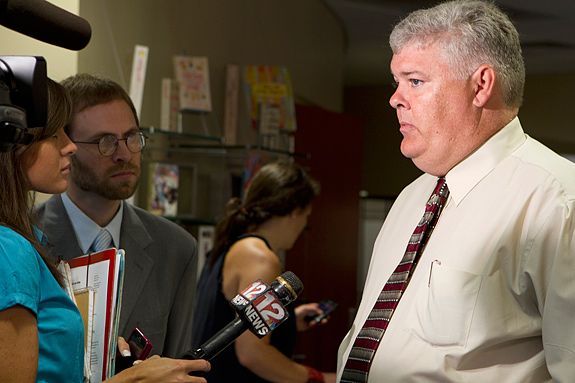 Plaintiff Matt Webster talks with reporters after the lawsuit announcement. Webster and his wife are in the process of adopting two boys who do not have current immigration status and Webster will not be able to obtain lawful status for the children until two years after the adoption process has been completed. Alabama’s immigration law will criminalize these children and make it illegal for Webster to transport and provide for them.