In a class action lawsuit filed today, the Southern Poverty Law Center challenged a policy of the Montgomery County Probate Office in Alabama and probate offices across the state that denies undocumented individuals and U.S. citizens whose intended spouses are undocumented their constitutional right to marry.

In a class action lawsuit filed today, the Southern Poverty Law Center challenged a policy of the Montgomery County Probate Office in Alabama and probate offices across the state that denies undocumented individuals and U.S. citizens whose intended spouses are undocumented their constitutional right to marry.

The policy, enforced in 54 of Alabama’s 67 counties, requires non-citizens who are seeking to obtain a marriage license to provide proof of their legal presence through a visa, green card or similar immigration document. The suit also challenges policies that require, without exception, marriage license applicants to provide a Social Security card, which undocumented persons cannot obtain.

The SPLC filed the case on behalf of Linda Smith, a U.S. citizen, and “John Doe,” an undocumented immigrant. Smith and Doe have lived together in a committed relationship for nine years. Doe provides companionship and critical financial support to Smith and their family, including Smith’s two children and grandchild.

The couple wishes to express their love for and commitment to one another by getting married and obtaining the economic, emotional and psychological benefits of marriage. But they can’t obtain a marriage license from Montgomery County Probate Judge Reese McKinney’s office or from the offices of most other probate judges in Alabama because Doe cannot provide proof of legal residence or a Social Security card.

“This arbitrary policy attacks one of the most fundamental rights in this country – the right to marry,” said SPLC Legal Director Mary Bauer. “There is no reason why anyone should have to produce their ‘papers’ before they say, ‘I do.’”

In addition to McKinney, the lawsuit is directed at probate judges who enforce the policy even though it is not required by any federal or state law, including the Alabama’s recently passed anti-immigrant law, HB 56. The lawsuit seeks class action status to represent couples across the state who would be denied a marriage license due to such a policy.

The U.S. Constitution guarantees the right to marry to all people, regardless of immigration status. The lawsuit charges that the Montgomery County Probate Office’s marriage license policy, and similar policies in other counties, violates the Constitution’s due process and equal protection clauses.

“Marriage licenses should be issued after a couple has professed their commitment to each other, not upon the showing of a nine-digit number,” said Freddy Rubio, co–counsel on the case. “Hispanic immigrants share the same religious and family values with Alabamians. We value living with our partner within marriage. This type of policy undermines those traditional values.”

“This policy serves no legitimate purpose other than to make life miserable for two people who love each other and wish to marry,” Bauer said. “This misguided policy must end.” 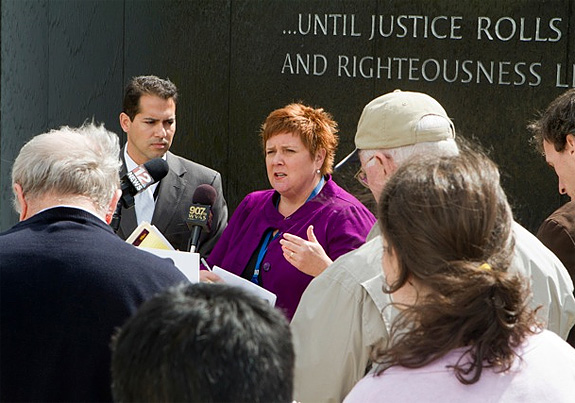