When students at Foley Elementary School in Alabama arrived for class one morning in late September, many of the Latino students were crying. It was the first day that portions of Alabama’s anti-immigrant law were in effect.

When students at Foley Elementary School in Alabama arrived for class one morning in late September, many of the Latino students were crying.

It was the first day that portions of Alabama’s anti-immigrant law were in effect. Among other provisions, school officials were required to question newly enrolled students about their immigration status and the status of their parents.

The students, many of whom are U.S. citizens from immigrant families, were scared. They were afraid the law would take them away from their friends, their school and the only home many of them have ever known — Alabama. And for some of them, it did, as their parents decided to pack up and leave.

“The first two weeks were just traumatic with the kids crying and the teachers crying,” said Patricia McGovern Armour, who teaches English as a Second Language (ESL) at the school. “The parents were coming in to withdraw their students. They were just devastated because this is the only home that these children know. We had children saying, ‘I don’t want to go back to Mexico. I don’t know how to write in Spanish. I only know English and this is the only school I’ve been to.’”

At Foley, 14 different countries are represented among the school’s 1,200 students. More than 200 of the school’s students are ESL students.

But that may be changing. 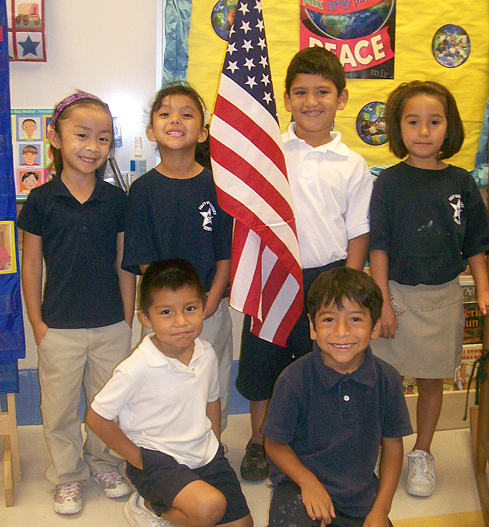 Foley, Ala., elementary students pose with an American flag. Many Latino students have disappeared from the classroom since the new law went into effect.

About 35 ESL students initially withdrew from the school, with three of those students returning, Armour said. Another 30 to 40 ESL students, she estimated, may leave.

“We’ve had some of our students ask us if we have our papers because they’re scared we might get deported,” Armour said. “They don’t know why people are being deported. They just know they have to have papers. So, they’re looking at us with big eyes saying, ‘Do you have papers?’ Because they’re worried about us.”

The fear hasn’t been confined to Foley Elementary School.

In October, the SPLC was successful in getting a federal appellate court to issue a temporary injunction blocking the school provision until the legal challenge to the law, HB 56, can be decided in full.

The Department of Justice, which also has challenged the anti-immigrant law, has asked school superintendents to provide information on school absences and withdrawals, noting that the law might have a chilling effect on school attendance.

A 1982 U.S. Supreme Court ruling — Plyler v. Doe — held that immigration status could not be used to deny a child an education.

“The Supreme Court long ago upheld every child’s right to receive a public education in this country — regardless of the child’s immigration status,” said SPLC President Richard Cohen. “The state of Alabama is now interfering with that right.”

Back at Foley Elementary School, teachers continue to deal with the law’s impact on students, Armour said.

“We still have children that get in trouble for something little at school and they just fall to pieces,” she said.

Armour recalled an incident where two kindergarten students got in trouble for playing in the bathroom. They became extremely upset, much more than the situation warranted. The teacher asked what’s wrong.

“They thought they were going to be deported,” Armour said.