Artist Jean Grosser’s artwork includes pieces that transform hate group literature into provocative art. For instance, she used the Southern Poverty Law Center’s historic lawsuit against the White Aryan Resistance (WAR) hate group as the subject of one of her pieces. 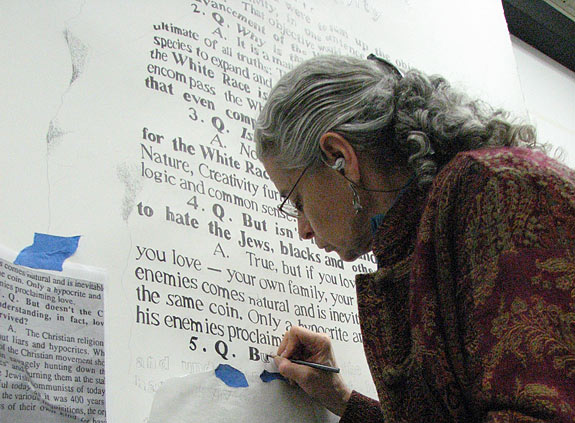 Artist Jean Grosser’s passion for social justice and human rights is so deeply ingrained that she believes it may be in her DNA.

Her grandfather was a conscientious objector during World War I. He was even imprisoned at Alcatraz and Leavenworth penitentiaries for his beliefs, ultimately serving time from 1918 to 1922.

“After he was released from prison following World War I, he worked on behalf of other political prisoners who were still in jail,” Grosser said. “He was always an advocate for political activism, so I think this is in my genes somewhere.”

The same passion is evident in Grosser’s artwork, which includes pieces that transform hate group literature into provocative art. For instance, she used the Southern Poverty Law Center’s historic lawsuit against the White Aryan Resistance (WAR) hate group as the subject of one of her pieces.

“I’ve always been someone who has been interested in human rights and social issues,” said Grosser, who lives in South Carolina and serves as the head of the art department at Coker College in Hartsville.  “I feel that somehow things that have always been important to me have found voice in these objects that I’m making.”

Overall, Grosser’s passion has resulted in a 30-year art career dedicated to raising awareness of injustice and human rights. Her work has been exhibited throughout the United States, in Mexico, Great Britain, France and Tanzania.

More than two decades ago, Grosser’s attention was drawn to the death of Mulugeta Seraw. The Ethiopian graduate student was beaten to death with a baseball bat in 1988 by racist skinheads in Oregon. The SPLC filed suit against Tom and John Metzger and their hate group, White Aryan Resistance, to hold them responsible for their role in the murder. WAR had organized the skinhead group. The SPLC won a $12.5 million judgment, which devastated WAR.

“It was a classic case of racial violence,” Grosser said. “He was murdered simply because he was black.”

She created a piece titled, “This Means W.A.R.” It features a portrait of Seraw and a coffin-like box containing a baseball bat. The box is collaged with documents related to WAR. The work, which was displayed in the South Carolina State Museum, served as a memorial to Seraw. It also served another purpose. 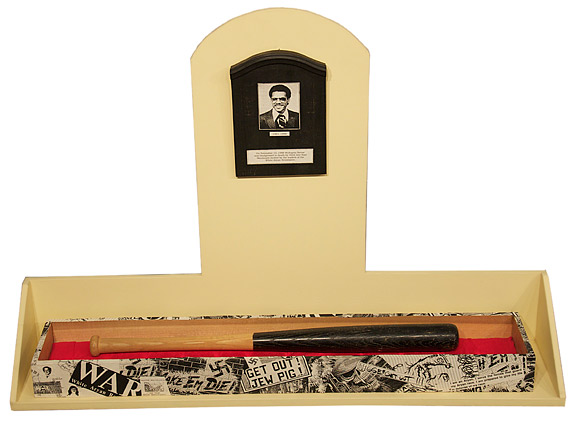 Jean Grosser's piece "This Means W.A.R." The artwork memorializes the death of Mulugeta Seraw, who was bludgeoned to death by neo-Nazi skinheads incited by the leaders of the White Aryan Resistance.

“The artwork was meant to expose the White Aryan Resistance and the horror that they caused,” she said.

Grosser has since put the piece on display in her office at Coker College. Though the piece may be shocking to students and parents visiting her office, she welcomes the opportunity to explain the work and the story behind it.

Confronting the disturbing messages espoused by hate groups and extremists is not just a challenge to the audience viewing her artwork; it was a challenge for the artist herself at one point.

When the Montana Human Rights Network and Holter Museum of Art in Helena, Mont., asked artists to transform neo-Nazi literature into artwork for a 2008 exhibit, Grosser was one of the artists involved. She drilled holes around the edges of the neo-Nazi books and used barbed wire to sew them shut.

She then allowed a group of art students to critique her work.

“The students said to me, ‘Why are you wiring it closed? Are you scared to read what’s inside? Do you think that you can’t trust us to look at this information?’” she said.

“They found it very patronizing that I would do that. The interesting thing was that it made me confront the fact that I didn’t want to read them. And I hadn’t really opened them. But it completely changed my approach because the moment I got that feedback, I started reading the books.”

Grosser’s art doesn’t hide the hateful messages. They’re exposed dramatically in “Fragments of Hate,” a series that takes pages from the neo-Nazi Creativity Movement’s text, The White Man’s Bible, and reproduces them as large six foot by four foot drawings.

“I’ve come full circle in response to the students’ comments,” she said. “I feel like that information is so unbelievable that it’s important in some way to reveal it to a wider audience.”

One piece features a page with the heading, “The Six Million Lie,” which denies the Holocaust. Another piece in the series headed with “Questions and Answers about Creativity” lays out the principles of this neo-Nazi movement. But by presenting these hateful messages in an art gallery, and in different forms, Grosser changes the context and meaning and communicates an entirely different message.

“The irony is appealing because I’m engaged in a creative pursuit and [the movement’s founder] calls the religion Creativity,” she said. “Someone could come into an art gallery and see ‘Questions and Answers about Creativity’ and it engages them. But once they start reading, they are engaged in a very different way.”

Grosser said audience reaction to the pieces is intriguing because people are usually not specific when they talk to her about her work. They will praise the work but no one has chosen to address its content. She said she’s intentionally chosen not to counter the disturbing messages within the work, but to simply trust the viewer has a “moral core.”

Grosser also created artwork displayed at the Greyhound bus terminal in Montgomery, Ala., where the Freedom Riders were beaten in 1961 as they tested federal laws designed to end segregation at the terminals. The artwork features a mugshot of a Freedom Rider on the left side of the piece that looks like a folding picture frame.

On the opposite side, a silhouette that evokes Southern Antebellum artwork represents the mugshot’s profile. The two images are surrounded by a collage of torn singed pages of hate literature and documents from the era, such as bus tickets and photos of segregated bus stations. 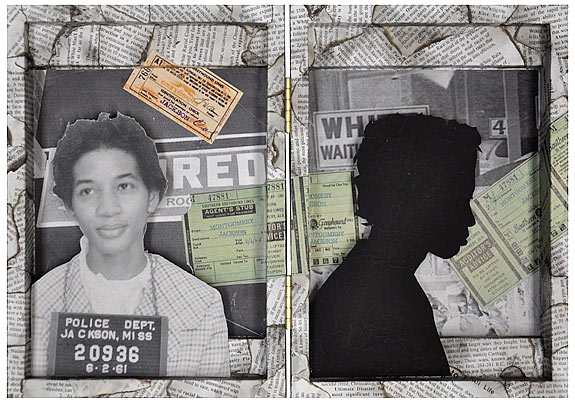 “Jean has an amazing talent for taking a message of hate and transforming it into a message of hope,” said SPLC President Richard Cohen. “She’s the best at making lemonade out of lemons.”

As Grosser continues to create art, she believes her passion for human rights will continue to be a theme that runs throughout her work.

“My desire to shed light on injustice always comes through one way or another,” she said.