Hannah Bradley and her classmates simply wanted to raise awareness about anti-gay bullying at their high school. So on Oct. 11 – National Coming Out Day – the students wore name tags stating their orientation.

Hannah Bradley and her classmates simply wanted to raise awareness about anti-gay bullying at their high school. So on Oct. 11 – National Coming Out Day – the students wore name tags stating their orientation.

But Bradley and other students were censored by school officials who forced them to remove their tags.

The SPLC today demanded in a letter to Jefferson County High School in Dandridge, Tenn., that school officials stop this censorship and warned they face a possible federal lawsuit on Bradley’s behalf.

“Students like Hannah who are courageous enough to take a stand against bullying deserve the school’s support – not censorship and condemnation,” said Alesdair Ittelson, an SPLC staff attorney. “Displays of heterosexual orientation are ubiquitous; it is impermissible for school authorities to censor or shame non-heterosexual students for simply declaring who they are.”

The letter, which was also sent to the county’s director of schools, asks school officials to confirm in writing by Oct. 29 that they have ended this unlawful practice.

The letter was prompted after Bradley was called to Principal Scott Walker’s office to remove the name tag, which had the word “demisexual” written on it. The term refers to an individual who does not experience sexual attraction without a strong emotional connection. 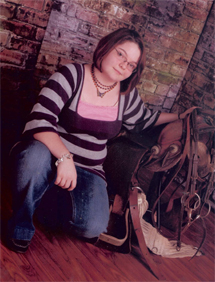 Bradley, who stands 4-foot-9, said she felt intimidated and trapped by a grown man blocking the door while the principal refused to listen to the two female students’ explanation of the purpose of National Coming Out Day.

“I only wanted to end bullying at my high school,” said Bradley, president of the school’s Gay-Straight Alliance (GSA). “School needs to be a place where everyone – regardless of their sexual orientation – feels safe. This means treating everyone with dignity and respect.”

On the same day Bradley was called to the principal’s office, another student wearing a name tag said she was told by a teacher to stop “throwing her sexual orientation in his face.” The remark was made after the student made an announcement about the school’s GSA.

After a classmate made an announcement about a different student club, the teacher turned to the student wearing the name tag and said, “At least someone has a real announcement.”

“Silencing Hannah and her classmates only perpetuates a silence that has been shown to lead to increased bullying and poor academic performance that affects all students – regardless of their sexual orientation,” Ittelson said.

Bradley’s speech is protected under the First and 14th amendments to the U.S. Constitution. The SPLC letter cites federal precedent, such as Tinker v. Des Moines and Gillman v. School Board for Holmes County. In Gillman, a federal court ruled that a school board’s ban on clothing expressing support for lesbian, gay, bisexual and transgender people was unconstitutional. The school had to pay $325,000 to cover the students’ legal fees.

The Tinker precedent shows that Bradley and her classmates “have the right to express their views freely, so long as their expression does not ‘materially and substantially disrupt the work and discipline of the school.’” It notes that even if the name tags created a disruption, case law has established that school officials have a duty to punish the disruptive student – not to prohibit a student’s protected speech.