An SPLC lawsuit has resulted in a historic ruling that has declared unconstitutional sections of a statute that prevented the U.S. Department of Veterans Affairs (VA) from granting benefits to a disabled veteran and her same-sex spouse. 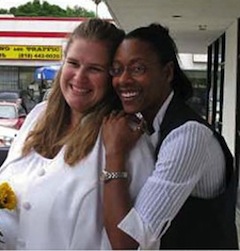 An SPLC lawsuit has resulted in a historic ruling that has declared unconstitutional sections of a statute that prevented the U.S. Department of Veterans Affairs (VA) from granting benefits to a disabled veteran and her same-sex spouse.

The case, Cooper-Harris v. USA, is the first to declare that veterans benefits must be provided to a married veteran no matter the sex of the veteran’s spouse. The SPLC brought the case in 2012 on behalf of Tracey Cooper-Harris, a disabled U.S. Army veteran, and her wife, Maggie. The ruling was issued yesterday.

“We asked the court to declare these laws unconstitutional so that the federal government can honor Tracey’s service and Maggie’s sacrifice by providing them the same benefits other married veterans and their spouses routinely receive,” said Caren Short, staff attorney for the SPLC. “Our nation has a proud history of honoring service members and their families for their sacrifices; all who have served honorably must be treated fairly by our government when their service is complete. We are gratified that the court agreed.”

Tracey is a veteran of both Operations Enduring Freedom and Iraqi Freedom.  In 2010, she was diagnosed with multiple sclerosis – a disabling disease that attacks the brain and central nervous system, for which there is no known cure. The VA determined her multiple sclerosis, as well as post-traumatic stress disorder, to be connected to her military service. As a result, Tracey receives disability compensation from the VA.

SPLC attorneys asked U.S. District Judge Consuelo B. Marshall on May 17 to block portions of the Defense of Marriage Act (DOMA) and the statute Title 38. Both laws defined “spouse” as “a person of the opposite sex who is a man or a woman.” Title 38 specifically governed veterans benefits, preventing veterans in legal same-sex marriages and their spouses from receiving benefits they would otherwise receive if they were married to someone of a different sex.

The court declared the Title 38 sections unconstitutional, finding there is no military purpose that could justify discriminating against veterans with same-sex spouses. It also found that Title 38 is not rationally related to the military’s commitment to caring for veteran families. The U.S. Supreme Court struck down DOMA in a separate case earlier this year.

Because of the court’s ruling on Title 38, Tracey and Maggie are now eligible for a number of benefits, including additional disability compensation and the right to be buried together in a state or national veterans cemetery. These benefits, and many others, are routinely provided to heterosexual married veterans and their spouses.

The couple is a working-class family on a limited budget. Maggie is an apprentice at an electricians union, and Tracey is a graduate student who only recently got a job with the local VA. As a result of this ruling, the additional benefits earned through Tracey’s years of military service will help offset some of the economic strain resulting from Tracey’s medical condition and enable the couple to pay for measures Tracey’s doctor has recommended to slow the progression of her multiple sclerosis.

The law firm WilmerHale served as co-counsel on the case.