The SPLC filed a federal lawsuit today against the town of Shannon, Miss., its mayor and its aldermen for unjustly denying a business license to a bar catering to the LGBT community. 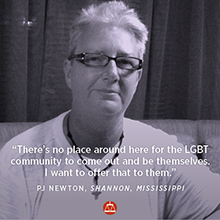 The SPLC filed a federal lawsuit today against the town of Shannon, Miss., its mayor and its aldermen for unjustly denying a business license to a bar catering to the LGBT community.

The complaint describes how the town of Shannon and its leaders denied a business license to Pat Newton, a lesbian, who owns O’Hara’s bar, in violation of her right to free speech and equal protection under the First and 14th Amendments.

A town cannot deny a license because of hostility toward members of a particular group. It also lacks legitimate authority to deny a license to prevent someone like Newton from sending a positive message about LGBT people in Mississippi or to prevent her from providing them a safe space.

“The mayor and aldermen have no legitimate reason to deny Pat Newton the business license,” said David Dinielli, SPLC deputy legal director. “Their opposition is rooted in blatant hostility toward a legitimate business, simply because a lesbian would operate it and because it would serve the LGBT community. They have discriminated against our client, even relishing the opportunity to discriminate.”

One alderman has stated that the town, which struggles with a shrinking tax base, welcomes the prospect of fighting a federal lawsuit rather than allow a revenue-generating gay bar to operate within the town’s boundaries. The complaint refers to him stating that he is looking forward to this lawsuit because litigation would likely delay the opening of O’Hara’s even longer.

Newton operated a bar called O’Hara’s in the community from 1994 to 1998, and it mainly served LGBT customers. After receiving numerous requests to reopen the bar, she entered into a lease and obtained a state business license and liquor license. She poured thousands of dollars and countless hours into upgrading the bar and preparing for its opening.

When she asked about obtaining a local business license, the mayor told her to submit an application and attend a board of aldermen meeting on June 4, when the board would vote on her application. Newton thought the hearing would be routine, but instead she encountered a hostile crowd of 30 to 40 people.

The mayor asked her to justify why she should be permitted to open the bar. After stating her reasons, the mayor asked the aldermen and citizens to raise their concerns. Newton was confronted with questions laced with insults from citizens and aldermen. One resident asked how Newton could call herself a Christian. Another asked whether she would let her daughter go into “a bar like that.”

The SPLC demanded that the board reconsider the vote at its next meeting on July 9 or face a federal lawsuit. In a letter to the board and mayor, the SPLC outlined the discriminatory behavior that is now the basis of this litigation.

The complaint indicates that city officials had denied earlier applicants’ requests to reopen the same gay bar while permitting bars that are unaffiliated with LGBT people to operate.

“I simply want to open a business in Shannon that would mean so much to so many people,” Newton said. “I was asked by people within this community to open this bar. I’ve met all of the town’s requirements. It’s sad that town officials have chosen to engage in ugly, discriminatory behavior that doesn’t represent the town I know.”

Since entering into a lease in May, Newton has expanded and repaired the bar’s parking lot, replaced deteriorating wood with siding, cleared outside lots filled with trash, and made other improvements.

The law firm Hogan Lovells is serving as the SPLC’s co-counsel on the case.