In Alabama, African-American children who were orphaned or neglected were routinely sent to live at a “reform school” for juvenile offenders, because state-licensed homes were segregated and few would accept black children. An early SPLC lawsuit changed that practice, opening the doors of such homes to all children in need.

The tragedy left him not only without a mother, but without a place to live. Emmett’s father was in prison. When police couldn’t find relatives to take him, they loaded the black youth into a car and drove him to the Alabama Industrial School for Negro Children at Mt. Meigs – a "reform school" for children who had run afoul of the law.

He was left there for almost five years.

The reason Emmett was forced to live at Mt. Meigs – even though he hadn’t been convicted of a crime – was that, except for one small group home, all of the group and residential homes for dependent and neglected children in Alabama were segregated and did not accept African-American children.

The state relied solely on these segregated facilities, even though it was ultimately responsible under Alabama law for either finding appropriate resources with private entities or establishing state-operated homes for these children. The all-white homes housed more than 700 children.

It all began when Denny Abbott, a white probation officer with the Montgomery County Family Court, noticed something odd about Emmett’s Mt. Meigs record. Though the school’s minimum age for admittance was 12, Emmett was only 10 when he entered the school. After Abbott uncovered the rest of the boy’s story, he knew he had to do something. 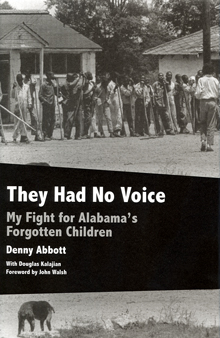 “I called everyone I could think of at the state Department of Pensions and Security, which had responsibility for placing children in homes,” Abbott wrote in his 2013 book, They Had No Voice: My Fight for Alabama’s Forgotten Children. “They not only knew all about the shortage of homes for black children, they knew all about Emmett. They’d tried to find a place for him several times but had given up. Everyone I talked to about Emmett offered the same advice: forget about him, he’s black.”

But he couldn’t forget about Emmett.

It wasn’t in Abbott’s nature to turn his back on children. He had already taken the state to court and won reforms at the Mt. Meigs school, which had operated as a labor camp that put black children to work in the fields. The children there also endured beatings and sexual abuse.

Facing the prospect of a legal fight that would roil the white community, Abbott had to find a lawyer with an unwavering commitment to justice. He turned to Howard Mandell, a young lawyer with a passion for civil rights law. Mandell, who is now chairman of the SPLC’s board of directors, came to Alabama in 1970 to clerk for U.S. District Judge Frank M. Johnson Jr. – a judge renowned for his civil rights enforcement record.

“When Denny first came to see me about the case, I was profoundly moved by the fact that it was not an African-American person seeking to defend the rights of African Americans, but a white probation officer in Montgomery, Alabama, who had enough empathy and concern to risk his job,” Mandell said. “He had a willingness to go far beyond the call of duty and to risk his own well-being for something greater than himself. Denny’s commitment motivated and inspired me to work even harder on the case.”

Mandell’s drive and dedication was obvious. Abbott had found a champion for Emmett and other children like him.

“I’ve never seen a person so committed to justice, to fair treatment and to equal opportunity for everybody as Howard,” Abbott said in a recent interview. “You could just tell it when you talked to him. You could just see it. Without him – without Howard – black dependent children really had no chance.”

All of Alabama’s children’s homes were privately owned and operated at the time, a number of them being sponsored by various religious denominations.

“What these homes were doing was inconsistent with the teachings of all three monotheistic faith traditions, and they were pretty adamant [in their discrimination],” said Mandell, who, two decades after establishing the state’s first racially integrated and practicing civil rights law firm, decided to serve in a different capacity, as a congregational rabbi.

Despite being privately owned and operated, these homes had to meet state licensing standards. They also depended almost exclusively on stipends provided though the Alabama Department of Pensions and Security. In other words, public money was flowing into segregated facilities. Also, out of the 15 state-licensed homes that had never housed a black child, several had not even signed forms of compliance with the Civil Rights Act of 1964 – a violation of federal statute by any institution receiving public funds.

With the financial backing of the SPLC, Mandell, in his first year of law practice, filed a statewide class action federal lawsuit in late 1972 to end the discrimination.

Almost immediately after the lawsuit was filed, Abbott began receiving threatening phone calls, including some from people who said they were Ku Klux Klan members. Virtually all of the callers called him a “n----- lover,” he recounts in his book.

“Nothing riled white folks like the threat of integration, even though they weren’t the ones being integrated,” he wrote. “To so many whites, integration was a fighting word as well as a profanity. You didn’t say it, much less do it – and you certainly didn’t even think about asking the federal government to order it. But we’d gone beyond even that. In Alabama, suing the Baptist church was like suing God – and we’d taken on the Presbyterians and Methodists at the same time.”

The case ultimately cost Abbott his job with the Montgomery County Family Court – a firing knotted in politics that he details in his book. Though the case ended a career that spanned more than a decade with the family court, the father of three persevered. Mandell, while working tirelessly on Emmett’s case, immediately filed a federal court action seeking to get Abbott’s job back for him.

Their perseverance paid off both for Emmett and for the plaintiff class.

A profile in courage

After the lawsuit was filed, Emmett’s aunt was found. It only took state officials questioning Emmett’s father at the prison to discover the relative.

“It turned out she had no idea where Emmett was all that time and was willing to take him in,” Abbott wrote in his book. “Just that quickly, Emmett got a home with his aunt – the home he might have had all those years if anyone had bothered to ask a few simple questions.”

Finding a home for Emmett only convinced Abbott that they “were on the path to ensuring a home for every child in Alabama who needed one.” As the case moved forward, more pieces began to fall into place.

The United Methodist Children’s Home in Selma eventually decided to integrate rather than continue fighting the lawsuit. How the home’s board of directors came to that decision is something Mandell will never forget. As part of the formal discovery in the case, Mandell was reading through the minutes of the home’s most recent board meeting. In these minutes, he discovered that the board had had a lengthy discussion as to whether the home’s acceptance of only white children was consistent with Christian values and teachings.

Upon concluding its discussion, the board held a vote on whether it should continue or change its policy. The vote was a tie, which meant the chairman had to cast the tie-breaker. A recess was held, at his request, so that he could find a place to pray on the matter. When he returned a few minutes later and the meeting reconvened, the chairman voted: He chose to integrate the home.

“That’s a profile in courage,” Mandell said. “It was all on his shoulders.”

The Brantwood Children’s Home also chose to integrate, signing a consent decree that ensured black members on its board, its screening committee and its supervisory staff. The home had already hired a black housemother by the time the SPLC reported the development in December 1974. Years later, Mandell would even serve as a board member for Brantwood, a completely integrated children’s home.

The biggest victory came in 1975 when a federal court issued an order barring state officials from referring neglected and orphaned children to segregated institutions. Thousands of black children across the state would benefit from the order.

The court also required the Department of Pensions and Security to conduct periodic reviews to ensure that no state or county agent violated the order. Alabama was forbidden from providing – either directly or indirectly – state or federal money to any childcare institution unless it had been certified that the home accepted children without regard to race.

The discriminatory system that had banished Emmett and countless others to reform school simply because they were black children with nowhere else to go would be dismantled. Abbott is quick to note that it would not have happened without a young SPLC-affiliated lawyer dedicated to the ideals of the civil rights movement. Decades later, he still describes Mandell as a hero.

“It took Howard Mandell to make that case happen in 1972,” Abbott said. “If he had said no … none of this would have happened.”