School officials told Jeydon Loredo, a transgender student in Texas, that a photo of him in a tuxedo wouldn’t be published in the yearbook because it violated “community standards.” The SPLC is taking action to protect his rights. 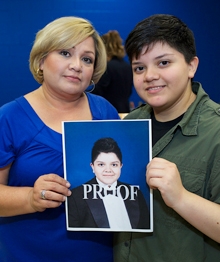 As a student at La Feria High School in Texas, Jeydon Loredo looked forward to his senior portrait appearing in the yearbook.

A major milestone in life would be summed up in one image: Jeydon in a crisp tuxedo with his hair neatly combed. As time passes, this may be the only image his classmates have to remember him by.

That’s why Jeydon, a transgender student, was upset to learn from the school district’s superintendent that his photo would not appear in the yearbook because it supposedly violated “community standards.” Jeydon, while he grew up female, is now a young man. He is transgender, meaning that his gender identity is different from what he was assigned at birth.  District Superintendent Rey Villarreal told his mother that Jeydon’s photograph would be included only if he wore stereotypically feminine attire, such as a drape or blouse.

“I’ve lived here my whole life, and I’ve grown up with the kids here,” Jeydon said. “I’ve seen those in my community go through troubles, and denying my tuxedo photo would be a way for the district to forget me and everything I’ve brought to this community. The yearbook is for the students, not the faculty or the administration. It is a way for us to remember each other.”

The SPLC is defending Jeydon’s rights, demanding that the district allow the photo to be published or face a federal lawsuit. The demand comes after the SPLC and the Human Rights Campaign offered a guidance letter in an attempt to address this situation absent litigation. The SPLC’s demand letter was sent to district officials today, two days after the school board refused to take action on an appeal by Jeydon.

“This is not Jeydon acting out,” said Jeydon’s mother, Stella M. Loredo. “He is a man, who was lucky enough to grow up in La Feria. Denying him the tuxedo photo is a slap in the face to me, to him, and to a community that should respect all students.”

Jeydon has been a model student at La Feria High School. He has never been called to the principal’s office nor had any disciplinary issue. After he was photographed in a tuxedo for the yearbook, school district officials instructed the photography studio to withhold the photo.

That’s when the superintendent told Jeydon’s mother that the photograph would offend the “community standards” of the small Texas town near the Mexican border. The superintendent said that if Jeydon had a problem with the decision he could “appeal it to the school board.”

Before this week’s board meeting, the SPLC and the Human Rights Campaign urged the board to support Jeydon’s rights in a letter citing the legal and scientific basis for such a decision. Though Jeydon was assigned a female gender at birth, his gender identity – his internal sense of gender – is male.

Every major medical and mental health organization in the country recognizes that gender identity is distinct from biology. The fact that Jeydon was raised a girl does not make his male gender any less real. Courts have held that it may be a violation of civil rights laws to refuse to allow even a female student who identifies as female to wear a tuxedo in a yearbook photo. Yet, the superintendent has refused to even refer to Jeydon by his male name in written communication with the student despite the student’s request to be referred to as Jeydon Loredo in all written communication.

The SPLC’s demand letter describes how refusing to include the photograph violates the student’s freedom of expression, which is protected by the First Amendment. It also violates the Equal Protection Clause of the 14th Amendment, which protects the student from discrimination, as well as Title IX, which bars discrimination on the basis of sex by any education program receiving federal money. Refusing to publish the photograph would even violate the school district’s own anti-discrimination policies.

At the recent school board meeting, Jeydon, represented by legal counsel, spoke about his desire to have the photo included in the yearbook.

“Please allow my community to remember me, and to remember me the way I truly am, in the clothes that reflect me: Jeydon Laredo,” he asked the board.

Alesdair Ittelson, an SPLC staff attorney, explained the district’s legal obligations to the board.

“As school board members, you don’t get to decide whether transgender students receive the same rights as students who are not transgender,” Ittelson said. “You must treat Jeydon equally and with the respect he deserves. The fact is, you must allow the tuxedo photo in the yearbook in order to remain in compliance with the law.”

The board went into closed session, but no decision was made.

“This denial reminds us that outdated stereotypes concerning sex and gender still serve as an excuse for schools to deny students their rights,” said SPLC President Richard Cohen. “The SPLC is working in communities across the South to fight these battles, and is delighted to join with the Human Rights Campaign to protect young people who are victims of discrimination.”