The Southern Poverty Law Center filed suit in federal court today to stop pervasive anti-LGBT bullying and harassment committed by students – and even faculty members and administrators – within the schools of Mississippi’s Moss Point School District. 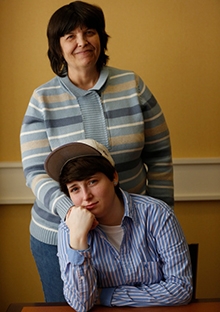 It was clear to Destin Holmes, the plaintiff in a new SPLC lawsuit, that she wasn’t welcome at her junior high school along the Gulf Coast in Mississippi.

From the moment she arrived in the school district for the eighth grade, other students taunted and mocked her. They bombarded her with anti-gay slurs and insults – calling her “dyke” and “it.” Sometimes “freak” or “he-she.”

Along with the insults, students threw things at her in class. Destin repeatedly appealed to teachers and other school officials to help her – as did her father and her grandmother.

But the grown-ups at Magnolia Junior High refused. Even worse, they joined in and blamed her for the abuse she faced.

One teacher refused to let her use the girls’ restroom, forcing her to use the boys’ room instead. Another wouldn’t let her participate in a math exercise where the class was divided by gender, because, according to the teacher, she was “an in-between it.” Destin sat in the middle of the classroom and cried while the other children laughed.

Even after she attempted suicide, which the school was made aware of, the harassment continued.

Desperate, her family appealed to the state Department of Education, but officials there said it was a local matter. At the local level, though, the school’s top officials were indifferent – even hostile. The  principal told Destin’s mental health caseworker that he wouldn’t follow his recommendations, because “when you are in my school, you follow my lead since I allow you to be here.” And he told Destin, “I don’t want a dyke in this school.”

He called her a “pathetic fool.”

Finally, her family withdrew Destin from school and began homeschooling her. But that was a financial hardship, and the following school year – in the fall of 2013 – she was again enrolled, this time at Moss Point High School.

She found the abuse wasn’t over. Despite knowing she was a girl, a teacher addressed her as “boy” in front of the class. When she reported the incident, she was transferred to a math class that was a year above her skill level and wasn’t able to return for several weeks.

Despite the SPLC’s attempts to resolve the matter through a demand letter sent to the school district in early 2013, a resolution was not reached. So the SPLC filed a federal civil rights lawsuit that seeks to enforce Destin’s civil rights and force the district to address the mistreatment of Destin and other lesbian, gay, bisexual or transgender students.

The suit, filed in December, asserts the district has violated Destin’s rights under the 14th Amendment’s Equal Protection Clause and Title IX of the Education Amendments Act of 1972.

“District officials who are entrusted with the safety and education of all students not only ignored, dismissed and even blamed victims for the abusive behavior of faculty and other students, they also participated in discriminatory acts,” said Anjali Nair, SPLC staff attorney. “Destin has been humiliated and tortured. Our suit seeks justice for her and other students who were mistreated, as well as reforms that will prevent this from happening again.”

The lawsuit is part of the SPLC’s campaign to ensure the dignity and safety of LGBT students in schools across America. Its highly successful Teaching Tolerance documentary, Bullied: A Student, a School and a Case that Made History, has been distributed, free of charge, to more than 100,000 educators nationwide. In addition, in 2012, the SPLC reached a historic settlement with the Anoka-Hennepin School District in Minnesota to protect LGBT students following a rash of suicides by students who were bullied because of their sexual orientation.

Destin and students like her want nothing more than safe classrooms free of harassment.

“I deserve to go to school where students, and especially the teachers, don’t always call me names,” she said. “The district should have protected me and made sure I was learning, like the rest of the kids. Instead, the students, teachers and even principal, called me names. It shouldn’t have happened to me, and it shouldn’t happen to anyone else.”