A new SPLC report finds that many foreign students lured to the U.S. as part of a “cultural exchange program” are being deceived by recruiters and exploited by employers seeking cheap, vulnerable labor but offering few cultural opportunities. 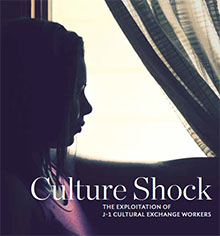 Laura Franco and her sister thought they had found a life-changing opportunity.

After meeting with a labor recruiter and spending hours browsing through a website, both were convinced that leaving the Dominican Republic to work in Tennessee as part of the U.S. State Department’s cultural exchange program would be a great way to spend their summer break from college in 2012.

According to the recruiter, the sisters would clean rooms in a “fancy hotel” where room and board would be free. The sisters saw it as an opportunity to improve their English and meet people from other cultures – a true cultural exchange.

When they arrived in Tennessee, they found a far different reality. They didn’t receive free room and board at a fancy hotel. Instead, they were ordered to sleep with the horses in the resort’s stables. And, in addition to cleaning hotel rooms, they were expected to tend to the horses and maintain the stables.

Laura and her sister are not alone.

The SPLC has found that the J-1 Visa Exchange Visitor Program has been transformed into a source of cheap, exploitable labor for employers, undercutting U.S. workers and damaging the nation’s image abroad. Many students leave the United States disillusioned and deeply in debt.

“I felt like we had no choice,” Laura told the Southern Poverty Law Center. “We had paid so much money to come here and have a decent job and cultural exchange experience. What we got was not what we signed up for.”

The SPLC’s findings are documented in a report being released today, Culture Shock: The Exploitation of J-1 Cultural Exchange Workers. The report describes how the promise of experiencing American culture is an empty one for many workers in the J-1 Visa Exchange Visitor Program, a program originally envisioned as a tool to improve U.S. diplomatic relations. 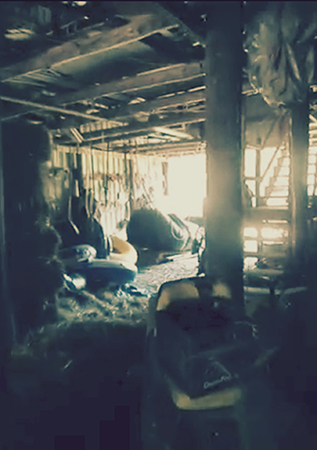 Sisters Laura and Adela of the Dominican Republic were forced to sleep in these stables at a resort in Tennessee after being promised free room and board at a "fancy" hotel.

Based on hundreds of interviews with J-1 workers in the Summer Work Travel and Trainee and Intern categories, the report found these workers, typically students, are frequently placed in low-paying jobs with long hours and few opportunities to experience cultural activities in the United States. Some workers are even at risk of human trafficking.

Employers are using this poorly regulated program to cut labor costs since they do not have to pay payroll taxes for J-1 workers. Such benefits for employers have led staffing agencies to promote the program as a source of inexpensive foreign labor, much like the H-2 guest worker program administered by the Department of Labor (DOL). But unlike the DOL, the State Department claims to have no legal authority hold employers accountable for abuses. It typically does little or nothing to help workers with employment-related issues.

“Employers, sponsors, and overseas recruiting agencies have hijacked the cultural exchange program, turning it into a low-wage guest worker program that benefits their bottom lines at the expense of these workers and the United States’ reputation,” said Meredith Stewart, report author and SPLC staff attorney. “Each year that the State Department and Congress fail to reform this program is another year thousands of young people return to their home countries with stories about being exploited by U.S. employers with an insatiable appetite for cheap, vulnerable labor.”

The report offers detailed recommendations to return the program to its original mission and provide safeguards for J-1 workers as well as U.S. workers.

Workers deceived, exploited
Many of the exploited workers are college students in the J-1 Summer Work Travel Program. Others come to the United States to train in their career field as part of the J-1 Trainee and Intern Program. These two J-1 visa categories account for more than 130,000 foreign workers arriving in the U.S. each year as part of the wider J-1 program.

Prospective J-1 visitors connect with State Department-designated job placement agencies – called sponsors – that charge them hundreds or thousands of dollars to be placed in jobs with U.S. employers. The sponsors’ overseas partners, who recruit and screen prospective visitors, also charge fees, sometimes exorbitant, for their services.

Sponsors and recruiters promise the opportunity of a lifetime to these workers – a chance to live and work in the United States while learning about American culture and improving their English. They promise good wages and show photos of attractive jobsites and housing. They also have a financial incentive to make the jobs seem as attractive as possible. The fees that foreign recruiters and sponsors charge students are completely unregulated, and J-1 students often borrow money to pay them.

Once in the United States, J-1 workers are placed in low-wage jobs with little chance of repaying the debt they incurred, leaving many with little choice but to continue working under abusive conditions.

They’re people like Lhan Kassemwattan, who traveled from Thailand in 2011 on a J-1 visa to work at a hotel in Orlando, Fla., for a year. She applied to the J-1 Intern and Trainee Program because it promised to provide training and a certificate in hospitality management – a potential boon to her career. She also looked forward to the opportunity to improve her English.

Lhan paid the Thai recruiters and the U.S. sponsor $8,000 to get the job. She borrowed the money from her mother, believing she would be able to pay it back. After all, the recruiter said she would earn $1,000 each month. 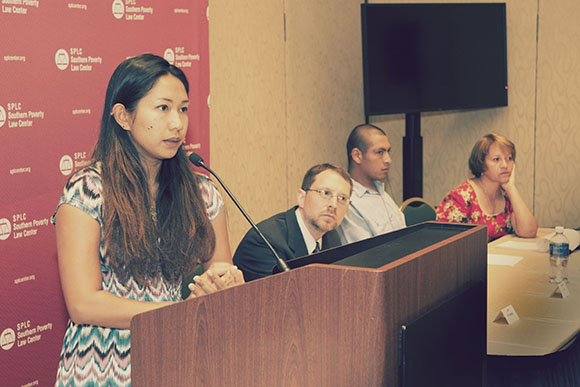 Lhan Kassemwattan of Thailand was promised training in hospitality management at a hotel in Orlando. But after paying $8,000 as part of the J-1 Trainee and Intern Program, she spent her entire internship making beds and cleaning toilets--and never earned the $1,000 per month she expected. Photo by Aaron Ansarov

After arriving in the United States, however, the employer told her and the other J-1 students that the jobs were not yet available. Lhan and the others had to borrow more money from their families to pay rent and buy food in the meantime.

After a month, the hotel placed Lhan in housekeeping. The workers repeatedly asked about switching to positions promised by the training plan, but the hotel never took them out of housekeeping. Lhan spent her entire internship making beds and cleaning toilets. She never made the $1,000 per month she was promised.

“What the sponsor and recruiter told me about the internship turned out to be a lie,” she said. “If I had known I was only going to be cleaning hotel rooms, I would not have paid so much money for the job.”

“We can only expect the abuse and fraud to grow as more employers turn to the J-1 visa program as a source of low-wage workers,” Stewart said. “It is time to break this cycle and return this program to its original mission of cultural exchange.”