Three years after a first-of-its-kind study found that more than half of the states fail at teaching the civil rights movement to students, a new report released today by the SPLC’s Teaching Tolerance project shows that coverage of the movement in U.S. classrooms remains woefully inadequate. 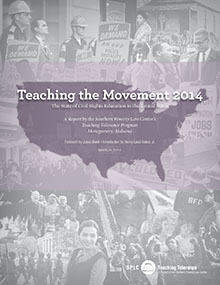 Three years after a first-of-its-kind study found that more than half of the states fail at teaching the civil rights movement to students, a new report released today by the SPLC’s Teaching Tolerance project shows that coverage of the movement in U.S. classrooms remains woefully inadequate.

The study – Teaching the Movement 2014: The State of Civil Rights Education in the United States – examines standards and curriculum resources related to the study of the modern civil rights movement for all 50 states and the District of Columbia.

This update to the 2011 Teaching the Movement study compares the requirements in state standards to a body of knowledge that reflects what civil rights historians and educators consider core information about the civil rights movement. The 2014 study was also expanded to include a review of the resources and materials that states offer to teachers.

“Three years ago, we were concerned that many students’ knowledge of the civil rights movement boiled down to two people and four words: Rosa Parks, Dr. King and ‘I have a dream,’” said Maureen Costello, Teaching Tolerance director. “Even though some states have made improvements, and many offer valuable resources to help teachers explore this important era, this report shows that coverage of the civil rights movement remains woefully inadequate in most states.”

In this new report, 20 states received grades of “F.” These include five states – Alaska, Iowa, Maine, Oregon and Wyoming – that neither cover the movement in their state standards nor provide resources to teach it. Despite a more nuanced evaluation of state standards and resources in the 2014 report, only three states (Georgia, Louisiana and South Carolina) received a grade of “A.” Seventeen states also improved by one letter grade since the last report.

Despite the national significance of the civil rights movement, many states continue to mistakenly see it as a regional matter or a topic of interest mainly for black students. Generally speaking, the report found that the farther from the South – and the smaller the African-American population – the less attention paid to the movement in schools.

“Want to have a meaningful ‘conversation about race?’” he writes. “That conversation, to be effective and to last, to become part of the fabric of the national American narrative, must start in elementary school, and continue all the way through graduation from high school. It must do this in the same way that the story of the Mayflower, the Pilgrims, the Puritans, the ‘City Upon a Hill’ and the key, shaping stories and myths about ourselves were formulated for us through the school curriculum.”

The SPLC issued the report to promote change by identifying the shortcomings in state standards and highlighting areas of excellence. The report encourages states to integrate a comprehensive approach to civil rights education into their K-12 history and social studies standards. It also calls for a concerted effort among schools and other organizations to ensure that educators are well-prepared to teach about the movement.

“The civil rights movement isn’t just sit-ins and bus boycotts; it is a long, long struggle for equality that has lasted years and years and will last years more,” said civil rights activist Julian Bond, who wrote the foreword to the report. “That’s why Teaching Tolerance’s study of what is and is not taught about civil rights is so important. If we do not learn these stories, we cannot understand how important they have been and how necessary they are.”