Kelly Fischer faced discrimination in New Orleans when she tried to find a school for her blind, autistic son. She became a plaintiff in an SPLC suit filed to ensure the city’s public schools comply with federal law by providing students with disabilities the educational services they need.

She was attending a High School Fair in New Orleans, a chance for parents to meet representatives from the city’s high schools and learn more about them. The Crescent City’s school system, which has been touted as a model for the rest of the nation, offers school choice. The fair seemed like the perfect opportunity to find a school for her blind and autistic son, Noah, to attend next year.

But several representatives discouraged her from applying to their schools despite federal law requiring all of the city’s public schools – including charter schools – to accommodate students with disabilities. 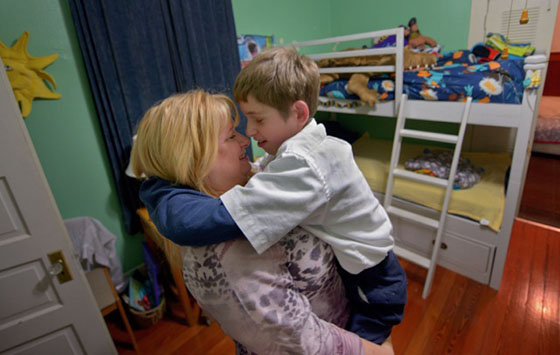 The experience created a bad sense of déjà vu for Fischer.

After moving to New Orleans about four years ago, she endured the same discrimination during a lengthy search for an elementary school for Noah. Fischer became one of 10 plaintiffs in a lawsuit the SPLC filed against the state in 2010 to ensure New Orleans public schools comply with federal law by providing students with disabilities the educational services they need.

SPLC lawyers will be in federal court today for a hearing that will determine if the case will be certified as a class action. If granted, the SPLC would argue the case on behalf of more than 4,500 New Orleans students with disabilities, potentially bringing changes throughout the city’s schools.

“This case has already been a long legal battle, but we will not stop fighting for students like Noah until this discrimination ends,” said Eden Heilman, lead attorney on the case. “The Louisiana Department of Education has a duty to ensure these students are not being shut out of the city’s schools and denied the education they deserve.”

Since the lawsuit was filed, the state has spared no legal argument or expense – filing a barrage of motions that have only helped prolong the court battle at a cost of more than $1.5 million in  fees to the state’s outside counsel. A 2011 U.S. Supreme Court ruling that changed the standards for certifying a case as a class action also hit the reset button on that process for SPLC lawyers.

It’s the state’s reluctance to simply address the discrimination that vexes Fischer, who previously worked in Indiana as a therapist for children in residential care receiving special education services.

“I feel like the state has decided that no supervision is the easier route to go,” she said. “So, they’ve turned a blind eye toward schools that are not in compliance.”

During the High School Fair, Fischer was candid about her 12-year-old son’s educational needs: He’s not on track for a high school diploma, but a certificate of completion. He’s not college-bound. He needs vocational and living skills.

It was clear from their responses that several schools didn’t want Noah.

Even though she found some high schools at the fair that could accommodate Noah, they were far from home, which would mean a long bus trip to and from school. The distance also would be an obstacle for the rest of his family, which wants to be part of a school community.

Searching for success
Finding schools that meet the needs of a student with disabilities can be a long and difficult journey. The first elementary school Noah attended in New Orleans placed him in a regular third-grade classroom even though his previous school in Indiana placed him in a separate special-education classroom.

“I’m thinking, ‘How in the world is he going to function, and how is this poor regular-ed teacher going to manage this kid who has very complicated needs?’” she said. “Most regular-ed teachers aren’t taught specific information about special education.”

That was evident when she saw the teacher hand out worksheets to all of the students – including Noah, who is blind. Since there wasn’t an aide to assist him in the classroom, his mother went to school with him.

Noah eventually transferred to another school that year. It was better, but it still wasn’t meeting his needs. His mother says they spent the school year fighting to get things specified in his Individualized Education Program, which outlines the services he needs at school. There were meetings and back-and-forth discussions with different officials – time-consuming tasks to protect her son’s legal rights. Noah also endured a 90-minute bus ride to and from school.

Fischer realized she’d have to launch another search for a school if she wanted Noah to receive the education he deserved – and is guaranteed by law.

“That was really frightening because I started to think about what is going to happen,” she said. “How many schools will I get turned away from?”

She teamed up with the parent of another student with disabilities searching for a new school. The SPLC lawsuit describes how they were turned away from four schools. Often, the schools either told the women that they couldn’t accommodate their children or suggested they consult other school officials to see if it would be somehow possible to provide the services their children needed. When it was the latter, they didn’t hear back from those school officials. A fifth school said they didn’t have a faculty member in charge of coordinating special-education programs.

Fischer ended up enrolling Noah in Lafayette Academy Charter School, which he still attends today. She says the school has met his needs and has been a good experience for him.

“The thing that just concerns me is why is it possible that this school can meet the law and others can’t?” she said. “Why was I so shocked to come across such a good program, which is basically a program that does what a school is supposed to do? I shouldn’t have been shocked about that. That should have been everywhere.”

Even though Fischer’s search for an elementary school ended happily at Lafayette Academy, her friend’s search continued: Her son couldn’t attend the school because it wasn’t wheelchair accessible, according to the SPLC lawsuit.

Speaking up for the voiceless
Now Fischer is in the midst of a search for a high school. Since the High School Fair, officials with the city’s school districts have offered to speak with her or take her on a tour of some of their schools. But the twisted path that led to these offers is evidence of the problems within the school system.

“We have this choice system and it’s supposed to be so wonderful and parents are supposed to have access to information to make these educated choices, but I have to go these extra miles and end up having to arrange to be escorted from school to school or things like that,” she said. “I really just want to enroll my son like any other parent.”

She also knows it can be difficult for other parents to go those extra miles, which is why it is important to stand up for all New Orleans students with disabilities, whether it is through the SPLC lawsuit or her own activism.

“I’ll make sure Noah gets what he needs,” she said. “I’ll knock on every door and I’ll show up at every meeting if that’s what it takes. But I have a lot of friends who don’t have the ability to do that for a variety of reasons.

“When I show up at a school board meeting, I’m fortunate to have a spouse at home making dinner and doing homework and putting kids to bed. When I go from school to school, it’s because I have the ability to take an hour off during the day and I have a car to get there. And, not everybody has those things. I guess part of me speaks up for people who don’t have the ability to do it.”