An SPLC advocate describes his visit to a municipal court where impoverished traffic offenders are sentenced to jail terms because they can’t pay their accumulated fines. 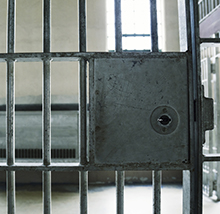 I was preparing to leave the municipal courtroom in Montgomery, Ala., when the bailiff announced that the inmates were being brought in.

A handful of men entered the courtroom. Handcuffed and shackled, they shuffled to a long bench and sat down. One by one, they were called before the municipal judge. None was appointed an attorney. Most had been arrested for warrants relating to unpaid traffic tickets. The judge asked if they had the money to pay the balance. Most didn’t. When they couldn’t pay, he sentenced them to jail to serve out their fines – one day for every $50.

One of the last called was a young man who appeared to be in his early 20s. He wore a jumper that looked at least two sizes too big; he hung his head when the judge spoke to him. His mother, who had been waiting inside the courtroom, rushed up the aisle to be with him. The young man owed $2,736 in old traffic tickets and misdemeanor fines.

Municipal courts in Alabama act mostly as debt collectors. Their brand of justice is limited to the scope of traffic tickets and other misdemeanors. Most towns in Alabama have them, and almost all rely on them to supplement meager city budgets.

Neither the young man nor his mother had the money to pay. She tried to hand the judge a piece of paper, but he refused to look at it. I learned later that it was a letter from his employer, explaining that work had been slow for the past few months and that he had not been given any shifts. They expected things to pick up, though, and he would be starting to work again in two weeks. He had been the victim of a shooting before that and had spent almost six months unable to work. His medical bills were piling up, and he had a newborn daughter.

The judge sentenced him to 54 days in jail for the crime of being too poor to pay.

Last August, the SPLC filed a federal lawsuit against the city of Montgomery and its municipal judges on the young man’s behalf.

The city, essentially, is operating a modern-day debtors’ prison, imprisoning low-income and working people without inquiring about their ability to pay or providing them with adequate counsel.

As our suit claims, it’s a violation of the U.S. Constitution.

Jacob Denney works for the SPLC as an economic justice advocate and researcher.