Legislation signed by Mississippi’s governor will help reduce the state’s prison population and make sentencing more equitable; many drug offenders will get treatment instead of prison terms.

As the managing attorney for the SPLC’s Mississippi office, I’ve seen the terrible toll the state’s broken criminal justice system has taken on its communities.

The state has the shameful distinction of having the second-highest incarceration rate in the nation – ranking behind only Louisiana, according to the Department of Justice. The last decade has seen Mississippi’s prison population grow by 17 percent to more than 22,000 prisoners last year.

Many prisoners aren’t hardened, violent criminals. Nearly three-quarters of the people entering Mississippi prisons in 2012, in fact, were nonviolent offenders, according to a task force that examined the state’s prisons. And the system fails them: Almost one in three nonviolent offenders are back behind bars within three years of their release. These statistics paint a grim future of a state with a skyrocketing prison population that costs taxpayers, communities and the people caught in this broken system dearly.

This morning, I was pleased to witness Mississippi Gov. Phil Bryant sign groundbreaking reforms into law that can help repair this broken system. As a member of the task force that issued recommendations for reform, I can attest that these reforms address many longstanding issues. They help protect our communities from violent offenders but take steps to prevent low-level offenders from returning to prison. 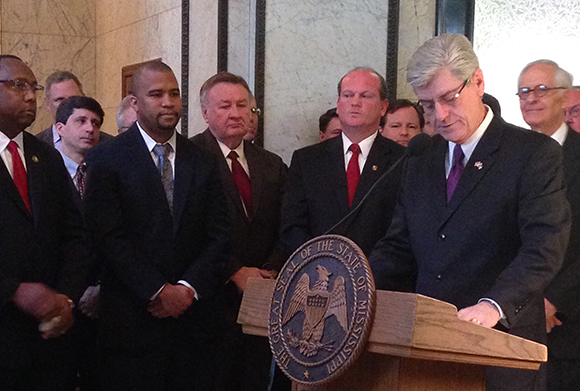 Jody Owens (fourth from right) served as the SPLC’s representative on a task force that recommended reforms to Mississippi’s criminal justice system. He watches as Mississippi Gov. Phil Bryant signs the legislation.

These reforms also set a minimum for the percentage of a sentence that a prisoner must serve before becoming eligible for release. It’s believed that judges have meted out longer sentences simply because they were unclear about just how much time would actually be served. This phenomenon has pushed up sentence lengths by 28 percent over the last decade.

The bill signed today also ensures that a technical violation of parole doesn’t land a person back in prison. Instead, prisoners will serve time in detention centers designed for such violations. It’s much needed. More offenders are entering prison for these “violations of supervision” than for committing crimes.

These common-sense reforms and others are expected to save the state $266 million over the next decade. That’s money that can be invested in programs that offer drug treatment, training and other services that can reduce recidivism. It’s far better than the $50 and bus pass the state provides prisoners when they’re released.

The SPLC has worked diligently to promote these reforms. Changes won’t come overnight, but the state has taken a leap forward this week. For too long, Mississippi has had a one-answer solution for crime: lock people up and throw away the key. We’ve already seen that “solution” is not a solution at all.