Agenda 21, a nonbinding United Nations global sustainability plan signed by the United States more than 20 years ago, is being used by extremists and mainstream politicians to stoke fears and stifle rational policymaking across the country, according to an SPLC report released today. 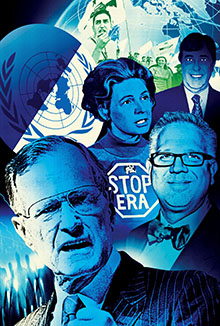 Agenda 21, a nonbinding United Nations global sustainability plan signed by the United States more than 20 years ago, is being used by extremists and mainstream politicians to stoke fears and stifle rational policymaking across the country, according to an SPLC report released today.

The report, Agenda 21: The UN, Sustainability and Right-Wing Conspiracy Theory, examines how activist groups like the John Birch Society are pushing conspiracy theories that have led some states to pass resolutions condemning the document and one to enact legislation intended to outlaw its effects. It also describes how lawmakers have been swept from office for their support of Agenda 21. In one Alabama county, an entire planning and zoning commission resigned in disgust after an award-winning smart-growth plan was killed over groundless Agenda 21 fears.

“The hysteria over Agenda 21 has no basis in reality,” said Heidi Beirich, report author and director of the SPLC’s Intelligence Project. “Unfortunately, it has poisoned rational discussion of the challenges facing communities. If we want to address real-world problems, we must recognize there’s no genuine controversy surrounding Agenda 21. There are only groundless conspiracy theories peddled by extremists and opportunistic politicians.”

Even the Republican National Committee bought into the propaganda in January 2012, denouncing Agenda 21 in a resolution as a “destructive and insidious scheme” that is meant to impose a “socialist/communist redistribution of wealth.”

Agenda 21 was signed at the conclusion of the 1992 United Nations Conference on Environment & Development in Rio de Janeiro, Brazil. President George H.W. Bush and the leaders of 177 other nations signed the plan. At the time, it was seen as a sensible planning paper, a nonbinding statement of intent aimed at dealing with sustainability on an increasingly crowded planet.

Agenda 21 is not a treaty. It has no force of law, no enforcement mechanisms, no penalties and no significant funding, the report notes. It only seeks to encourage communities around the world to come up with their own solutions to overpopulation, pollution, poverty and resource depletion. It cannot force anyone to act.

But in the 22 years since it was signed, extremists have transformed Agenda 21 in the public’s mind into a secret plot to impose a totalitarian world government, a nefarious effort to crush freedom in the name of environmentalism, according to the report.

Alabama recently passed a law meant to outlaw any effects of the plan. The legislatures of Kansas, New Hampshire and Tennessee all passed state resolutions condemning it. Similar needless laws have been approved by one chamber of the legislatures in Arizona, Missouri and Oklahoma. And political fights over it have broken out in at least half a dozen other states and countless local communities, according to the report.

In communities like Carroll County, Md., politicians have been voted out of office for supporting local plans. In Baldwin County, Ala., all nine members of the planning and zoning commission quit in disgust after the County Commission killed their smart-growth plan “on a pretext so devoid of relevance and merit as, in our opinion, to elicit only ridicule,” they wrote.

Prominent politicians like former House Speaker Newt Gingrich and Sen. Ted Cruz (R-Texas) have contributed to such outcomes as they denounce the plan that Cruz has claimed would “abolish” golf courses and paved roads.

“It is time to call out Agenda 21conspiracy theories and the people spreading them,” Beirich said. “There is too much at stake to stand idly by as these baseless fears incapacitate the ability of state and local governments to address actual issues. This is the real danger surrounding Agenda 21.”