The fierce grassroots campaign threatening to derail the Common Core State Standards is being fueled by far-right propaganda that relies heavily on distortions, outright falsehoods and demonizing conspiracy theories promoted by antigovernment extremists, according to a new SPLC report.

The fierce grassroots campaign threatening to derail the Common Core State Standards is being fueled by far-right propaganda that relies heavily on distortions, outright falsehoods and demonizing conspiracy theories promoted by antigovernment extremists, according to a report released today by the Southern Poverty Law Center (SPLC).

Now being implemented in 44 states, the Common Core is a set of learning standards that identify the literacy and math skills children in America’s public schools, wherever they live, should master at each grade level.

But to Christian Right, Tea Party and antigovernment activists, the state-driven effort to lift student achievement is actually “Obamacore,” a nefarious, left-wing plot to wrest control of education from local school systems and parents. Instead of the “death panels” of “Obamacare,” the fear is “government indoctrination camps.” 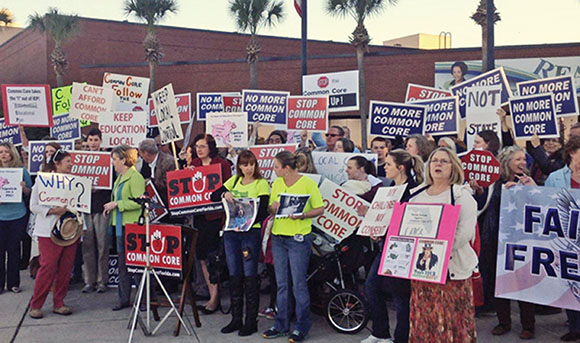 “These claims may sound outlandish – and they are – but the fact is, millions of Americans are absorbing this extremist propaganda, and it’s having a very real impact,” said Heidi Beirich, director of the SPLC’s Intelligence Project. “These lies are being repeated in churches, legislative hearings and town hall meetings across the country.”

The report, Public Schools in the Crosshairs: Far-Right Propaganda and the Common Core State Standards, was researched by the Intelligence Project and the SPLC’s Teaching Tolerance program.

Many Christian Right activists claim the Common Core will indoctrinate young children into “the homosexual lifestyle” and instill anti-American, anti-Christian values. Their fight has been joined by radical antigovernment groups like the John Birch Society, which claims the standards are part of a global conspiracy to create a totalitarian “New World Order.” Glenn Beck, meanwhile, describes the Common Core as “evil” and “communism.” U.S. Sen. Rand Paul has called it “dangerous.”

What’s more, it’s clear that some of the opponents, including national groups associated with the billionaire Koch brothers, are exploiting the Common Core in their broader fight against the public education system in an effort to promote school privatization measures.

“The 50 million children in our nation’s public schools, and the dedicated educators who serve them, deserve better than a debate that focuses on falsehoods and demonizes the very idea of public education,” said Teaching Tolerance Director Maureen Costello. “There are legitimate concerns about the Common Core, but those very real issues are being obscured and distorted by the claims of extremists.”

Despite the claims of many critics, the standards do not mandate the use of any particular book or course of study. Those decisions remain with individual teachers and school systems.

The standards were developed under the auspices of the National Governors Association and the Council of Chief State School Officers. Forty-five states initially adopted the Common Core, but Indiana in March became the first state to withdraw.