An SPLC lawsuit in Montgomery, Ala., has stopped the jailing of  indigent people who can’t pay traffic fines – a modern-day version of debtors’ prison that is finding new life across America.

Harriet Cleveland remembers the strained faces of the people waiting to make payments on the fines and court costs they owed the city of Montgomery, Alabama, for infractions such as unpaid traffic tickets.

But what the 50-year-old grandmother didn’t grasp at first was that they weren’t paying the city. Instead, they were paying Judicial Correction Services (JCS), a for-profit company that was overseeing the probation of people in her situation.

“I sat and watched a lot of people come out there, and a lot of money came out of their hands that I know they didn’t really have to give,” Cleveland said. “I’d see $200 or $300 come out of this young man’s pocket.”

Cleveland’s $140 monthly payment – $40 of which went to JCS for its fees – was a terrifying burden. She lost her day care job during the recession and was barely scraping by. She paid what she could, even when it meant her money was only going toward the company’s fees. One time she handed over $140 that went directly to JCS.

Finally, Cleveland didn’t have any more money to give. She received a notice in the mail: Pay $2,714 or go to jail. Not long after, a police officer arrived and arrested her while she was babysitting her grandson. A judge sentenced her to 31 days in jail because she was too poor to pay.

Cleveland spent 10 days in jail before SPLC lawyers got her released. The SPLC then filed suit on her behalf, alleging the Montgomery Municipal Court’s practices were unconstitutional. The SPLC and Equal Justice Under Law, a civil rights organization, announced a settlement agreement today with the city of Montgomery that will help Cleveland and change the city’s practices so that no one else will suffer her fate again. The agreement is pending final approval by the U.S. District Court for the Middle District of Alabama Northern Division.

Lawsuit brings reforms
The city will now determine if a person is indigent and will not jail anyone who cannot afford to pay. For people who are indigent, the municipal court will create lower payment plans of $25 a month or give the option of performing community service until the debt is paid. Equally significant, before the agreement was reached, the city decided not to renew its contract with JCS, which subsequently closed its Montgomery office.

What Cleveland experienced is the modern-day version of debtors’ prison, a practice outlawed in the 1830s but now finding new life across America, particularly in the Deep South. What makes the practice even more exploitive of the poor is that many municipalities have invited private industry into the justice system to squeeze profits from desperate people like Cleveland – making it even harder for them to pay off fines and avoid jail.

“Putting someone like Ms. Cleveland behind bars because they’re too poor to pay a fine is simply barbaric,” said David Dinielli, SPLC deputy legal director. “Compounding the nightmare for many indigent people in this situation are profit-hungry companies that are essentially demanding fees to keep them out of jail.”

Tears of joy
When Cleveland learned recently that JCS had closed its doors, tears of joy flowed down her cheeks.

“Just like a mirage, it disappeared,” she said. “So, thank goodness for that. That’s very, very inspiring to me. Because I’m thinking about everybody else I’d go there and see.”

It’s the latest turn Cleveland’s life has taken since this ordeal began in 2008 when police set up checkpoints in her neighborhood. She couldn’t afford car insurance, but she had to get to work, which led to tickets at the roadblocks. Her license was suspended after she was unable to pay the fines and court costs.

She was sentenced to probation and required to pay installments and a monthly fee to JCS. After the recession hit, Cleveland lost her job at a day care center. A title loan company took her car after she was unable to repay a loan. She was also told that foreclosure on her house was imminent, which she reported to JCS as she struggled to meet the company’s demands.

JCS kept warning that she would go back to court if she couldn’t pay – which she knew meant jail. She rented out rooms in her house, and even scrounged through trash for soda cans she could sell to recyclers.

“I was trying to give them money that I didn’t have,” Cleveland said.

After the SPLC filed suit, Cleveland’s story was featured in the June 23 issue of The New Yorker. The extensive article used her story to examine the growing abuse of the poor by private, for-profit companies that are taking over functions of the criminal justice system.

Cleveland hopes her story will raise awareness about an industry unknown to most people. It wasn’t until the SPLC became involved that she realized she was paying a company instead of the city.

“A lot of people don’t know about that, not at all,” she said. “They have all those people come in and make profits, and we’re barely making anything.”

Looking to the future
Cleveland is now focused on the future. She knows there are challenges that should prevent her from having such a positive outlook. She must find a permanent place to live and a new job. She had been working three hours a day as a day care custodian, the only job she could find in the post-recession economy and one that required her to walk four miles each way. But she lost that job because her employer could no longer afford to pay her meager wage.

Despite her ordeal, her complaints are few. She regrets not having a driver’s license because it means she can’t take her grandson to the park. She also admits it would be nice to indulge in one of her joys: fishing. But Cleveland says she’s found an inner peace. She has seen that change is possible. It gives her hope. 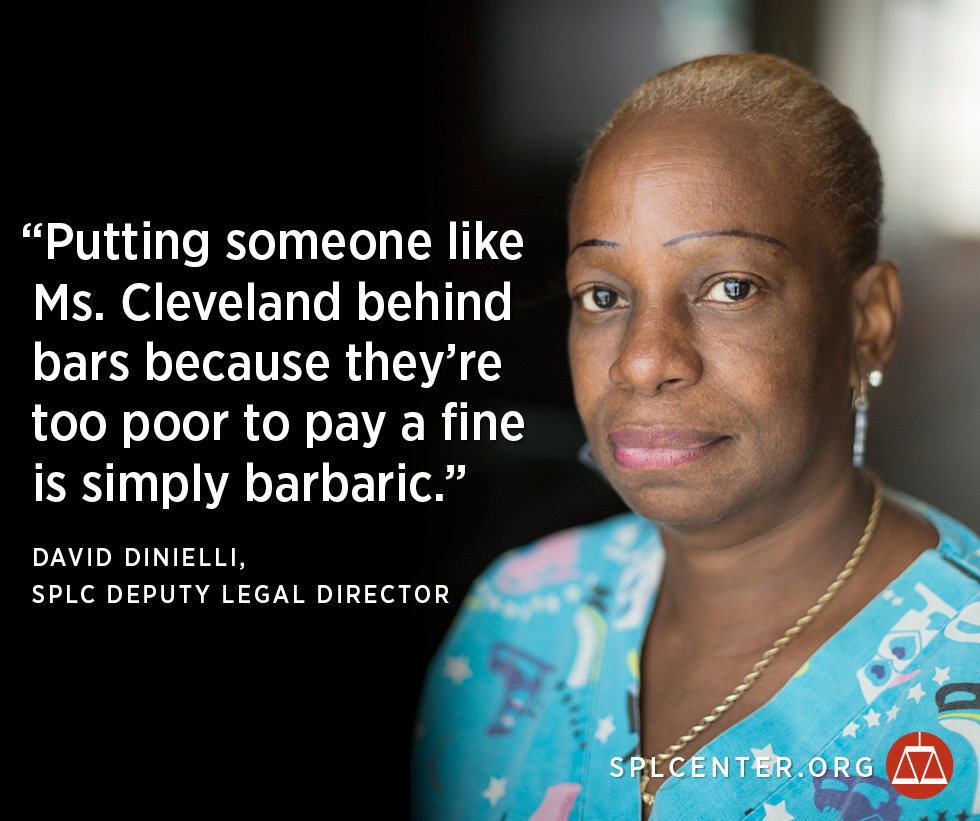