The SPLC and a coalition of civil rights groups today published an open letter asking the GOP to take a stand against the anti-LGBT bigotry of groups sponsoring this week’s Values Voter Summit.

The Southern Poverty Law Center and a coalition of civil rights groups today called on the head of the Republican National Committee (RNC) to urge party members to disassociate themselves from groups behind this week’sValues Voter Summit because of their relentless demonization of the LGBT community.

In an open letter published in today’s editions of TheWashington Post and The Hill, the groups reminded RNC Chair Reince Priebus that 15 years ago his predecessor told GOP elected officials to shun the Council of Conservative Citizens because of the group’s “racist views.”

“Will the GOP condemn anti-LGBT bigotry as vigorously as it opposed racism 15 years ago?” the open letter asks.

“Our elected officials should not legitimize hate speech by appearing before extremist groups that vilify entire groups of people simply because of who they are,” said SPLC President Richard Cohen. “We’re asking the leaders of the GOP to take a stand against the politics of division.”

U.S. Sens. Rand Paul and Ted Cruz and Louisiana Gov. Bobby Jindal are among those currently scheduled to speak at this year’s Values Voter Summit, which begins Thursday in Washington, D.C.

The summit is hosted by the Family Research Council (FRC) and co-sponsored by the American Family Association (AFA) and the Liberty Counsel. “These groups,” the open letter says, “engage in groundless demonization of LGBT people – portraying them as sick, vile, incestuous, violent, perverted, and a danger to the nation.”

The open letter contains these examples of the groups’ vilification of the LGBT community:

“These views are far outside the mainstream, and those who continue to associate with anti-LGBT extremists will find themselves on the wrong side of history,” Cohen said.

Joining the SPLC in signing the open letter are Faithful America, GLAAD, the Human Rights Campaign, the Leadership Conference on Civil and Human Rights, the NAACP Legal Defense and Educational Fund Inc., and People for the American Way. 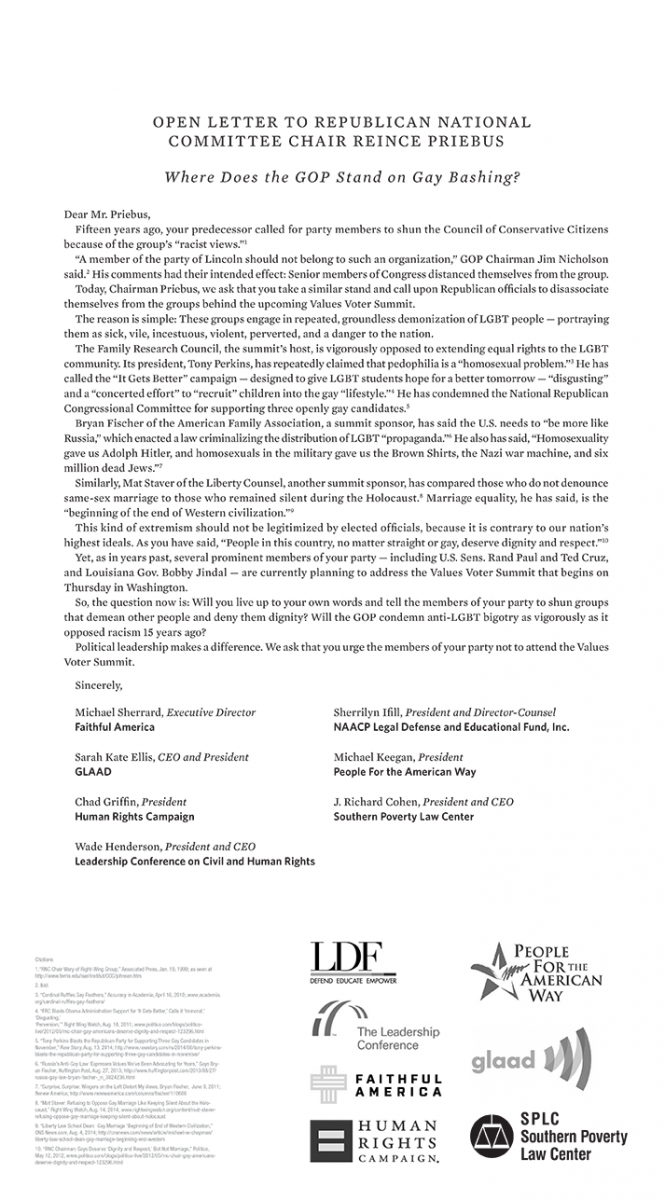