The SPLC submitted hundreds of pages of expert reports to a federal court as part of a motion to certify a lawsuit against the East Mississippi Correctional Facility as a class action. The reports expose shocking human rights violations at the for-profit prison for the mentally ill, including conditions described as “torture” by a forensic psychiatrist.

A prisoner at the East Mississippi Correctional Facility (EMCF) told the counselor that his heart was hurting and that he didn’t have a reason to live. He was also having hallucinations.

As the counselor met with the prisoner in December 2013, he noticed that the man was attempting to cut himself with a small, dull object. There was also a long rope around the prisoner’s neck. The counselor reached a conclusion: This prisoner is not in distress.

The counselor then simply walked away.

The prisoner would not see a mental health professional for nine more days. An expert reviewing the case for the Southern Poverty Law Center would later describe the incident as “beyond any deliberate indifference I have seen in my entire career; it is the definition of intentional patient abandonment.”

The prisoner eventually resorted to a tactic that others at this privately operated, for-profit prison use to get help: He set fire to his cell. Two days later, he was found dead in his cell – the apparent result of a heart condition the staff at the Meridian, Mississippi, prison rarely took seriously.

And it appears that attitude at this prison – home to many prisoners with mental health needs – never changed, if an entry in his medical chart is any indication. The entry showed that his vital signs were stable.

He had been dead for 10 hours at that point.

“I cannot state with certainty that the blatant and callous lack of care that this 43 year old man received during his last months at EMCF caused his death,” Dr. Marc F. Stern, a board-certified internist specializing in correctional care, wrote in a report for the SPLC. “However, I can state that it deprived him of any chance he had for continued survival.”

The SPLC in 2013 sued the state over conditions at the prison and yesterday filed a motion to certify the suit as a class action. If certified by the court, the lawsuit would benefit all prisoners at the facility, including the majority who have serious mental health needs. The American Civil Liberties Union, the Law Office of Elizabeth Alexander, and Covington & Burling LLP are serving as co-counsel.

The original lawsuit describes a nightmarish, violent prison where lights and toilets often don’t work, prisoners rarely see sunlight and go without showers for weeks, and floors and walls are covered in feces, blood and urine. 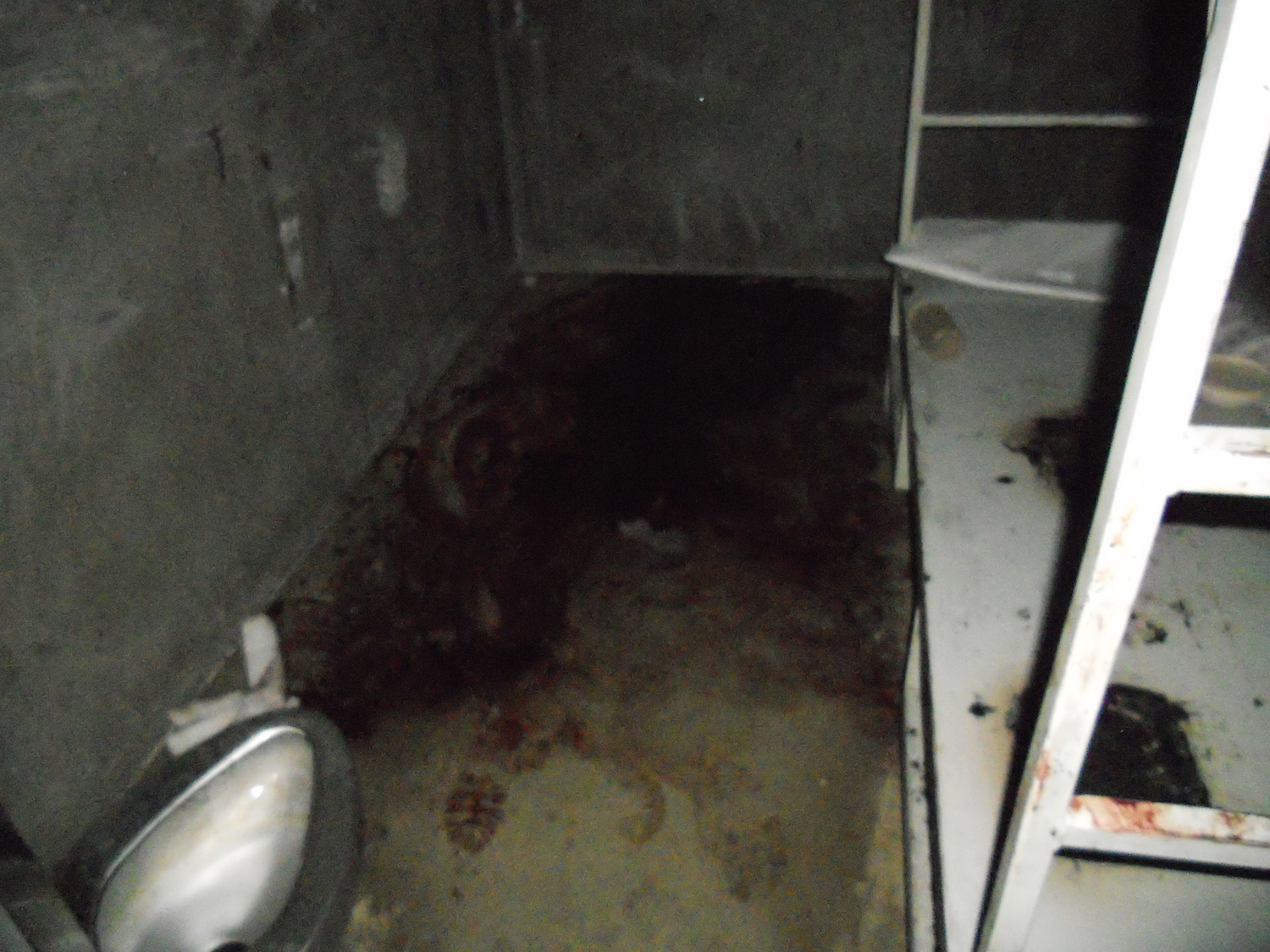 Blood on the floor of a cell at EMCF

The prison is operated by Utah-based Management and Training Corporation, which describes itself as the country’s third-largest operator of private adult correctional facilities. Health care is provided by Health Assurance LLC, based in Jackson, Mississippi.

“The hellish conditions that have been allowed to fester inside this for-profit prison should shock anyone with any sense of decency,” said Jody Owens, managing attorney for the SPLC’s Mississippi office. “It’s sickening that private companies earn profits through the misery and suffering of mentally ill prisoners who can’t get their most fundamental human needs met. The people of Mississippi should be outraged.”

The motion filed in the U.S. District Court for the Southern District of Mississippi, Northern Division, includes hundreds of pages of expert reports that give a glimpse into a dangerous and filthy prison that left experts aghast.

“Taken as a whole, the conditions in solitary confinement at EMCF are the worst I have witnessed in my 40 years as a forensic psychiatrist investigating jail and prison conditions,” Dr. Terry A. Kupers wrote in a report examining the prison’s mental health care system. “These conditions can accurately be described as torture according to international human rights agreements and standards. They press the outer bounds of what most humans can psychologically tolerate.”

Eldon Vail, former secretary of the Washington State Department of Corrections, also found the conditions in segregation to be deplorable.

“They are the worst I have ever seen in 35 years as a corrections professional,” he wrote in his report. “It is my opinion that all inmates confined to the segregation units at EMCF, and most especially those with serious mental illness, are subjected to an ongoing substantial risk of serious harm from the dangerous, filthy, and degrading conditions there.”

Where there’s smoke
The dysfunction at this prison literally hangs in the air as the smell of smoke wafts out of segregation units where prisoners have set fires. Thick cell doors are scarred with scorch marks. 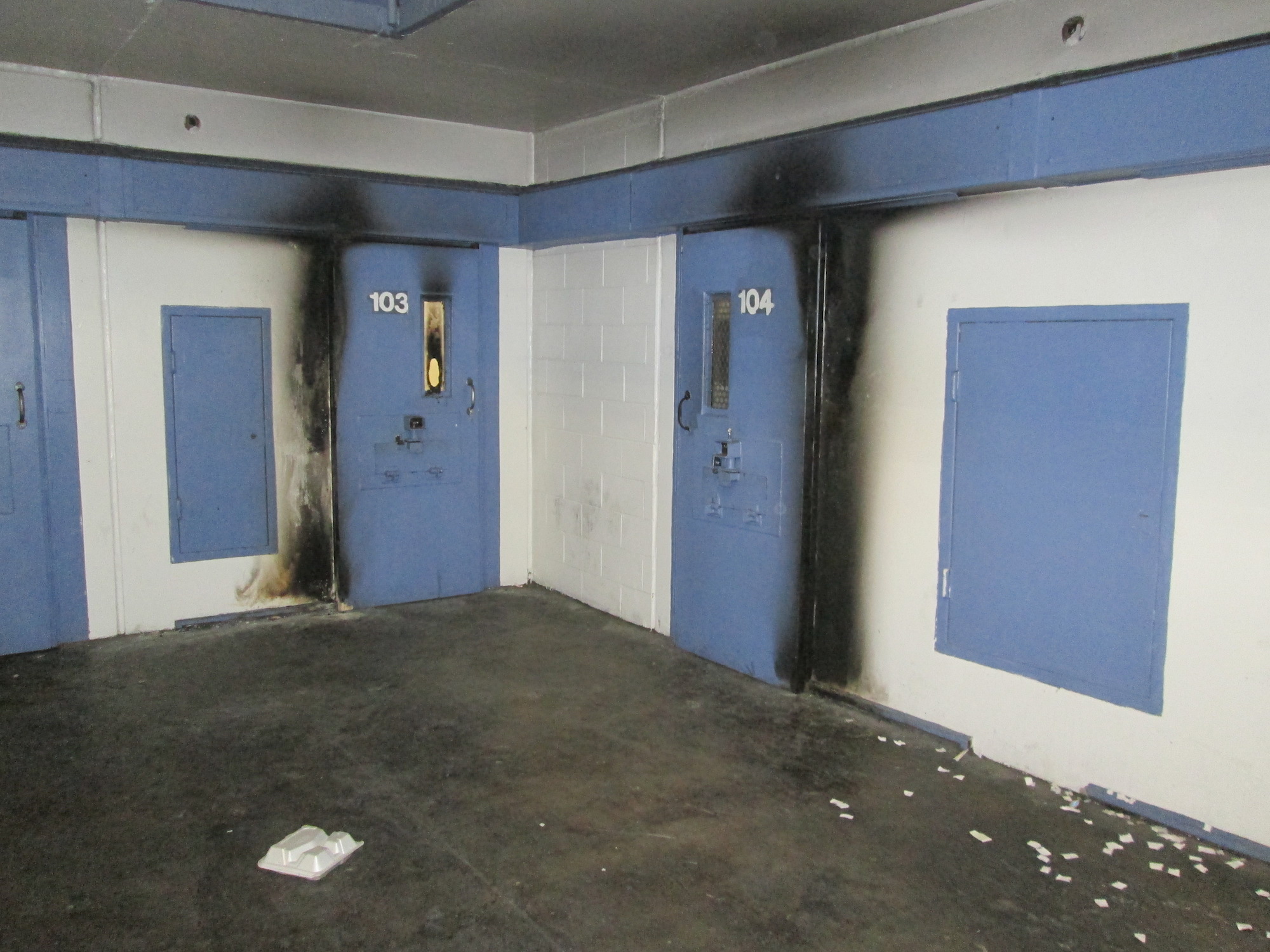 Scorch marks seared on the doors in Unit 5

When Vail visited the facility earlier this year, he found a “smoldering pile of debris in the middle of the day room floor.” Another expert found makeshift wicks in the cells, possibly the only tools prisoners have to get prompt attention from officers. Emergency call buttons in the cells are either broken or unreliable.

Even when prisoners get the attention of the staff, it’s unlikely they’ll get the help they need. There are numerous stories of prisoners struggling to get medical care.

“There was not a single medical chart I opened … that did not immediately reveal multiple serious examples of dangerous to life-threatening defects in health care,” Dr. Stern wrote. “Every aspect and dimension of health care delivery at EMCF is dysfunctional.”

This dysfunction is clear even in a small sampling of prisoner experiences.

“There were numerous incidents in the records I reviewed that documented patients in distress over mental health and psychotropic medication issues but declined to write a sick call request because of the co-pay they would be charged,” Terry Abplanalp, chief psychologist of the Washington State Department of Corrections, wrote in his report.

‘Swiss cheese’ records
The reports raise other issues as well. For example, a prison van is often used to transport prisoners to the emergency room, even in instances when an ambulance is needed. During the first 10 months of 2013, the van was used in 125 of 168 trips to the emergency room. That means during those 125 trips, the private contractors did not have to pay for an ambulance.

“Based on the cases I reviewed, many of these transportations by van were dangerous and placed the inmates at risk,” Dr. Stern wrote.

Prisoner medical records are another concern. One expert compared the medication records to “Swiss cheese” because there are so many holes. Entries documenting rounds by personnel frequently appear to be nothing more than a summary stating the prisoner is fine that has been repeatedly copied and pasted.

“I found, almost literally without exception in each of the mental health charts I reviewed for patients with serious mental health needs at EMCF that their charts were grossly incomplete, unreliable, and in many cases with entries that were apparently fabricated,” Abplanalp wrote.

Caught on video
Since prisoners can only get their most basic needs met by setting fires, breaking rules or cutting themselves, there is “an overwhelming number of unnecessary and dangerous use of force events and abusive practices.”

Vail reviewed video of such incidents, including an encounter where a prisoner was speaking to corrections officials through the tray slot of his cell door. As the prisoner complains about being “treated like a dog,” an officer sprays his face with pepper spray.

“Such a ‘sneak attack’ completely destroys any trust the inmate might have in speaking with mental health staff and will likely make the prisoner much harder to manage in the future,” Vail wrote.

In another video, a prisoner warns officers that another prisoner has asthma. He is sprayed anyway. The wheezing prisoner collapses on the day room floor. The prisoner, whose T-shirt is already spattered with blood, coughs blood onto the floor.

“This incident illustrates a complete callous disregard for the health and safety of the inmate who was suffering from the effects of the gas and illustrates the risk of substantial harm for every prisoner in the facility,” Vail wrote.

Dirt and darkness
Even without these issues, the prison is a dangerous place. A December 2013 video reviewed by Vail demonstrates that cell doors can’t be counted on to work. It shows an officer attempting to place a prisoner in three different cells with broken locks.

“This sequence would almost be comical were it not for the serious risk of harm unsecure cell doors present to the prisoners,” Vail wrote.

Vail also found the prison to be filthy. Inmates within a segregation unit are apparently instructed to throw their Styrofoam meal trays through their tray slot after eating. The trays land on the day room floor, which may explain why prisoners complain of rats. 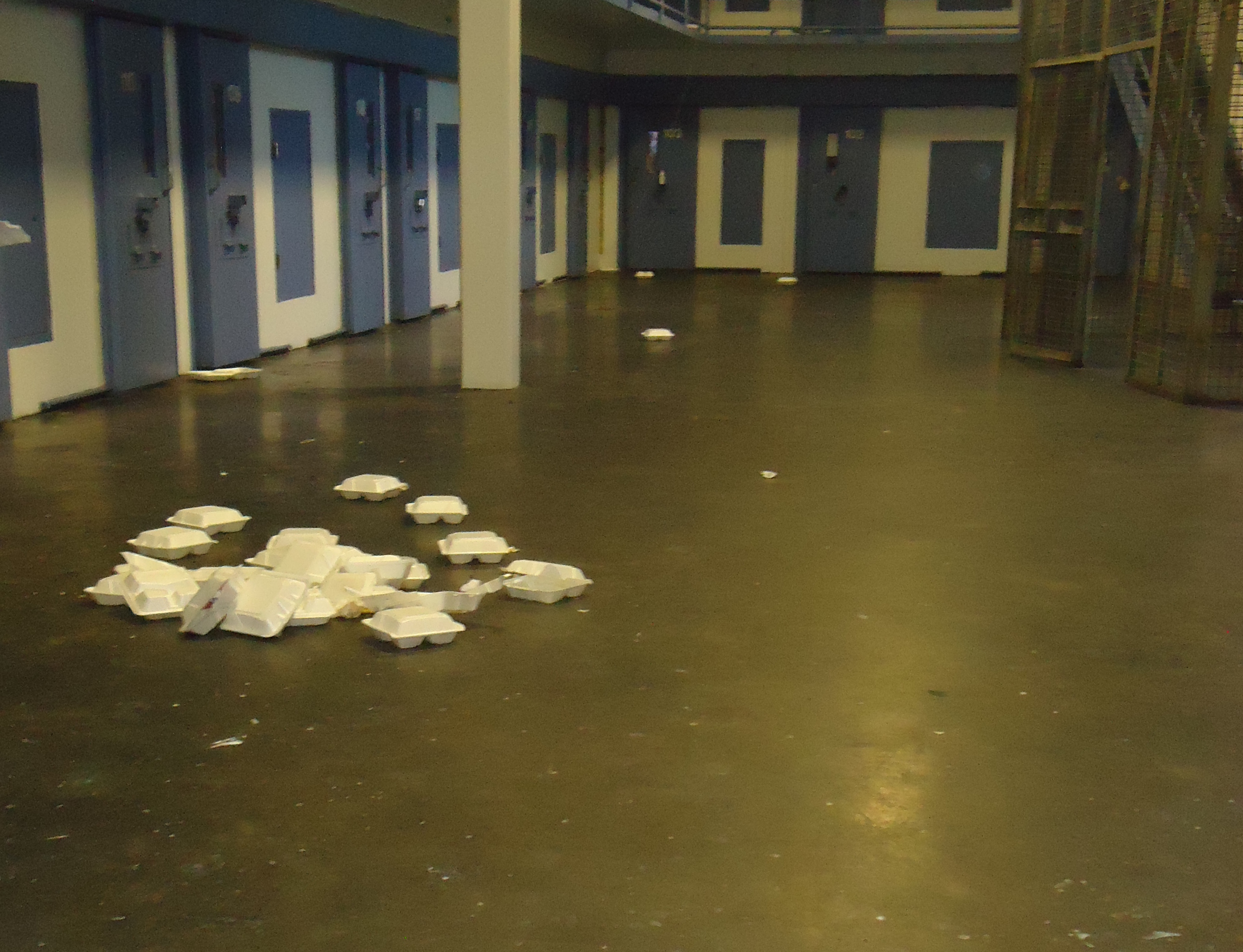 Meal trays in the middle of the dayroom floor

“[Prisoners] told me they block the bottom of their cells with clothing or towels so that rats cannot get in,” Vail wrote. “One told me he fed them.”

Prisoners also appear to live for weeks or months in dark segregation cells with broken or missing light bulbs.

“During my tour of EMCF, a large majority of the cells in the segregation units were dark in the middle of the day, and most of the inhabitants of the cells were lying on their bunks in darkness,” Dr. Kupers wrote. “I have never, in my 40 years touring prisons, seen anything like this.”

An expert touring the prison also found blood smeared on a cell window and left there for days, potentially exposing prisoners to blood-borne pathogens such as hepatitis and HIV. When an inmate worker was summoned to clean a blood-stained cell, he was not provided with protective gear to guard against such dangers.

‘Awful’ conditions remain
But the dangers at the prison shouldn’t be news to Management and Training Corporation. As Vail noted in his report, records from late 2012 show the company president toured the prison and found conditions in long-term segregation concerning. The pages of reports submitted to the federal court show that little has changed.

“Conditions in segregation are still awful today,” Vail wrote. “It is tragic that nearly a year and a half later, those units and the showers are still in that condition.”