SPLC staffers traveled to St. Louis on Oct. 10 to take part in the Ferguson October campaign. They joined thousands of peaceful protesters from across the United States in marching through St. Louis for justice. 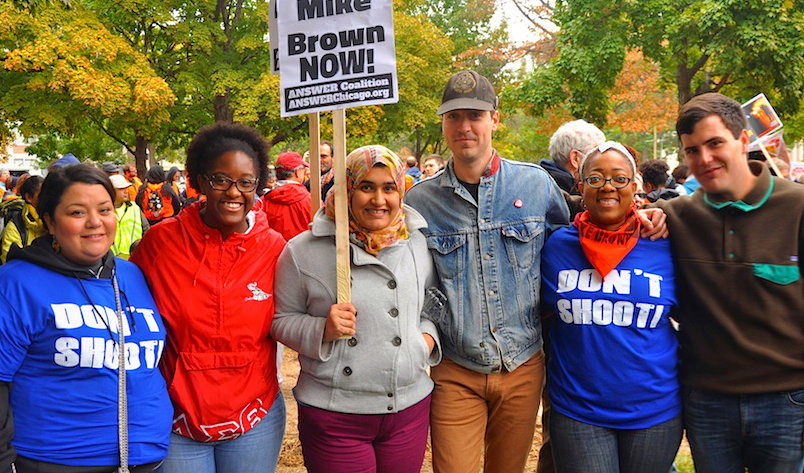 Six staffers from the SPLC’s Alabama office traveled to St. Louis on Oct. 10 to take part in the Ferguson October campaign. Sparked by the police shooting deaths of several black teenagers in the region, and amplified by a growing sense of racial injustice, it is a month-long campaign of awareness, resistance and civil disobedience in the area.

The SPLC employees joined thousands of peaceful protesters from across the United States in marching through St. Louis, raising their voices for those killed in police encounters and calling for an end to discriminatory policing practices. Several staffers shared their thoughts about moments that were meaningful to them.

Marching alongside my SPLC colleagues and people from all walks of life, I looked down to see an African-American boy of 2 or 3. He’s holding a sign that says, “I matter.” It dawned on me that there are people who act as though they don’t believe that he matters.

He matters to me – everybody is somebody’s baby. I am galvanized to create Teaching Tolerance lessons, professional development material and publications that combat the idea that some children don’t matter. Standing in front of the Ferguson Police Department, repeatedly chanting, “Black lives matter!” I realized how often I felt as a black woman as though I don’t matter. To say it, to verbalize it, to mean it – black lives matter ­– made my existence real. I will work to my death so that all children can feel the same way. 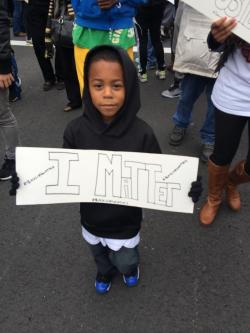 I found the march through downtown St. Louis particularly inspiring. People who came representing numerous ideologies, groups and religious or cultural backgrounds were able to stand united – if only for this brief moment in time – and call for judicial reform and an end to institutionalized racial discrimination. That was really heartening to see.

It takes all of us – not just those directly affected – standing up for a movement to really catch fire and catalyze change. When any American is being oppressed, the onus is on the rest of us to identify that oppression, target its source and work to alter the environment that allows it to occur. That’s why I went to St. Louis and Ferguson, that’s the result I hope for, and that’s the America I seek.

I will never forget being in front of the place Michael Brown was shot. A young black man died there, yet young black men have died in many streets in America. What makes it so different?

Perhaps it’s imagining Michael Brown laying there for four hours. Maybe it’s knowing that the neighborhood must endure that trauma every day. But part of it may also be the feeling of hope the reaction to his death has inspired in so many of us. I just keep wishing he didn’t have to die to ignite this hope in the rest of us.

My journey to Ferguson, Missouri, shook me to my core. Standing in the middle of the street where Mike Brown took his last breath left me feeling broken, angry and helpless. My former students’ faces raced through my mind as I stood in the midst of the chanting protesters. Bullets and death don’t discriminate; it could have been any one of us.

I thought about the families and children who reside in the neighborhood and pass these memorials every day. For the past 65 days they have heard voices like thunder echoing in the streets at night. The community is full of frustration, anger and rage, but these protests echo only a fraction of the systemic injustices the community is challenged with on a daily basis.

I feel proud to witness a movement where young people of color are taking the power back; they are empowered, conscious and resilient. ¡Ya Basta! The people have spoken. There is hope for a better world. Ferguson is a part of my heart. Without a doubt, I know that I will continue to commit myself to the movement, educating and empowering young people. I want to leave this Earth better than I found it. I know that we will win!

Anyone interested in learning more or participating in the Ferguson October campaign can do so here.