As the White House prepares to host a major summit examining the threat of violent extremism next week, a Southern Poverty Law Center study of domestic terrorism released today finds that the vast majority of this violence is coming from “lone wolves” or “leaderless resistance” groups composed of no more than two people. 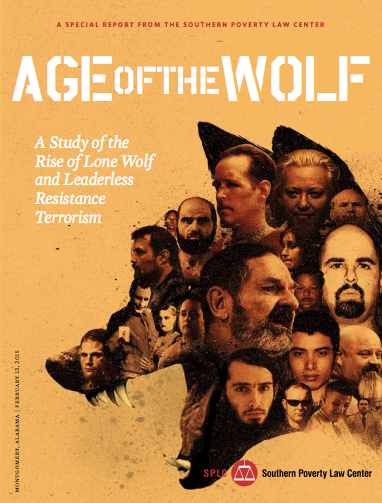 As the White House prepares to host a major summit examining the threat of violent extremism next week, a Southern Poverty Law Center study of domestic terrorism released today finds that the vast majority of this violence is coming from “lone wolves” or “leaderless resistance” groups composed of no more than two people.

The report – Age of the Wolf: A Study of the Rise of Lone Wolf and Leaderless Resistance Terrorism (download a PDF of the report)– examines more than 60 domestic terror incidents. Almost three-quarters of the incidents were carried out, or planned, by a lone wolf, a single person acting without accomplices. Ninety percent of the incidents were the work of no more than two persons.

The study, which included violence from both the radical right and homegrown jihadists, also found that a domestic terrorist attack or foiled attack occurred, on average, every 34 days. It covered a period between April 1, 2009 and Feb. 1, 2015, and was based on records maintained by Indiana State University and the University of Maryland’s Global Terrorism Database, along with the SPLC’s own roster of apparent domestic terror incidents.

“Our study clearly shows the urgent need for federal agencies to reinvigorate their work studying and analyzing the radical right,” said Mark Potok, SPLC senior fellow and editor of the report. “And it’s important to recognize the trend away from organized groups committing acts of domestic terror. As Timothy McVeigh demonstrated with the Oklahoma City bombing, lone wolves and small cells of domestic terrorists can create massive carnage.”

The White House will hold a summit on Feb. 18 to examine the cycle of radicalization that spawns such extremists, but there is a danger, in the wake of the Charlie Hebdo attacks in France, that Islamist terror will become the focus. While jihadism is a deadly serious concern, the report shows that authorities should not focus on it to the exclusion of other threats.

A timeline included with the report details a lengthy list of deadly attacks and plots across the country. They include a 2014 rampage in Nevada by a husband and wife with anti-government views that left two police officers and another man dead, a 2012 attack on a Wisconsin Sikh temple by a long-time neo-Nazi that killed six victims, and a 2010 attack that left an Internal Revenue Service (IRS) manager dead after a man who had attended radical anti-tax group meetings crashed his single-engine plane into an IRS office in Austin, Texas.

“The lone wolf’s chief asset is that no one else knows of his violent plans, which makes them exceedingly difficult to disrupt,” Potok said. “It is imperative that authorities, including those gathering at the White House next week, take this threat seriously. Anything less would be an invitation to disaster.”