The SPLC’s new classroom documentary, Selma: The Bridge to the Ballot, tells the story of the 1965 Selma voting rights struggle through the eyes of teachers and students who were at the forefront of the movement. 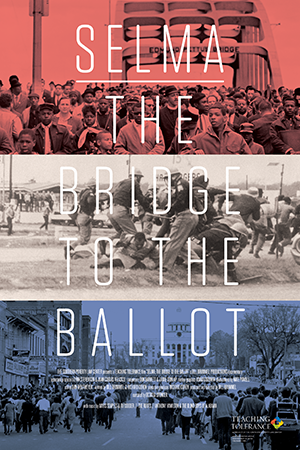 The SPLC’s new Teaching Tolerance film about the Selma voting rights march will premiere this week in Montgomery during the festivities marking the 50th anniversary of “Bloody Sunday,” the day Alabama state troopers attacked civil rights activists on the Edmund Pettus Bridge.

Selma: The Bridge to the Ballot, narrated by Academy Award-winning actress Octavia Spencer, examines the true story of the 1965 Selma-to-Montgomery march and the battle for voting rights. It’s told from the perspective of teachers and students at the forefront of the historic movement.

Visit the website for the film to watch the trailer.

"Our film is a documentary that tells an important story not touched on by the Hollywood feature,” said SPLC President Richard Cohen, executive producer of the film. “It’s the true story of the forgotten heroes, Selma’s courageous students and teachers who stood up against injustice despite facing intimidation, violence and arrests.”

The SPLC’s new classroom documentary, Selma: The Bridge to the Ballot, tells the story of the 1965 Selma voting struggle through the eyes of teachers and students who were at the forefront of the movement.

The SPLC has already begun shipping the 40-minute film and its teaching guide to thousands of schools across America. Nearly 25,000 orders have been processed.

“Our goal is for every high school and middle school student in the country to see the film during March,” said Teaching Tolerance Director Maureen Costello. “The film and companion tools help students learn about a significant time in the nation’s history as well as highlight the importance of voting and making a difference in your community.”

The documentary and its teaching kit, intended for grades 6 and up, will initially be sent to more than 25,000 teachers and made available to community groups. It includes a viewer’s guide to help teachers develop lesson plans about the Selma-to-Montgomery March, the Voting Rights Act of 1965 and present-day voting issues. Teachers can order it here. Teaching materials include a timeline about the marches and a map of Alabama showing key locations in the voting rights struggle.

Selma: The Bridge to the Ballot and the companion tools also address a need for in-depth civil rights curricula for students. A 2011 Teaching Tolerance study found that while the civil rights movement is one of the defining events of U.S. history, 35 states failed at teaching it.

The film also aims to inspire voter and civic engagement. In the 2012 presidential election, only about  six in 10 eligible citizens exercised their right to vote – meaning approximately 90 million voters did not cast ballots. Turnout dropped to a 72-year low in 2014.

“We believe our film will inspire millions of young people to vote and to take action to help make their communities and our country stronger,” Cohen said. “It’s a crucial reminder that each of us has the ability to bring about powerful social change.”

The film premieres in Montgomery at 6:45 p.m. on Saturday, March 7, at the Montgomery Performing Arts Center as part of the “Bloody Sunday” memorial events. Admission is free. The documentary also will be shown for free at Montgomery’s Capri Theater on March 8. It will play hourly from 2 p.m. to 7 p.m. 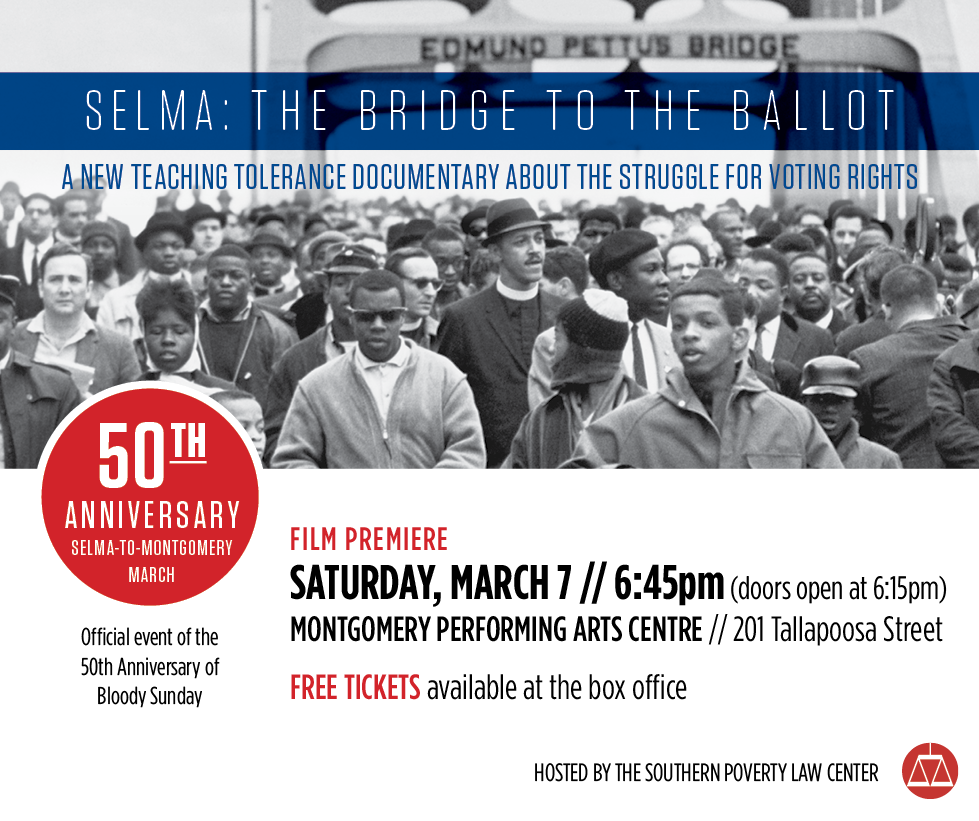 The film, which includes illustrations by award-winning graphic illustrator Nate Powell, is Teaching Tolerance’s eighth classroom documentary. Four previous films were nominated for Academy Awards, and two – A Time for Justice and Mighty Times: The Children’s March – won the Oscar in the short documentary category. Teaching Tolerance’s other honors include an Emmy and numerous awards from the Association of Educational Publishers and the National Education Association.

Since 1991, Teaching Tolerance has provided thousands of educators with classroom tools and resources that reduce prejudice, improve intergroup relations and foster school equity. The anti-bias program creates and distributes free, award-winning materials and curricula for educators. Its Teaching Tolerance magazine is sent to 450,000 educators in all 50 states and Canada.