Three years after an SPLC complaint sparked a federal investigation into the disproportionate number of African-American students arrested for minor rule violations in Louisiana’s Jefferson Parish schools, the problem has worsened, the SPLC told federal authorities this week.

The SPLC is now asking the Department of Justice to intervene.

The proportion of African-American children arrested for school-based misbehavior is now higher than when the initial complaint was filed, according to a supplemental SPLC complaint.

One black eighth-grader spent six days in juvenile detention after being arrested for throwing Skittles candy at another student.

“The Jefferson Parish Public School System has continued its destructive practice of arresting and jailing children for minor, and often trivial, violations of school rules and decorum,” said Eden Heilman, managing attorney for the SPLC’s Louisiana office. “It’s nothing less than a racially biased system of criminalizing African-American children. It must stop now.”

The SPLC’s complaint urges federal officials to take action, noting that the district’s arrest and law enforcement practices violate Titles VI and IV of the Civil Rights Act of 1964. It states that there has been “little to no movement” since the DOE launched its investigation three years ago.

The school district maintains contracts with local law enforcement agencies, including the Jefferson Parish Sheriff’s Office, that give officers stationed at district middle and high schools the authority to stop, frisk, detain, question, search and arrest schoolchildren on and off school grounds.

“If law enforcement officers are on school grounds at all, they should be there in a very limited capacity – to protect children in the unlikely event of some kind of violent attack,” Heilman said. “But, as in many other places across the country, school authorities have inappropriately handed off their responsibility to administer routine school discipline to the police.”

Jefferson Parish stands out in Louisiana as the school district with, far and away, the most school-based arrests and law enforcement referrals. The overwhelming majority of these arrests are for nonviolent, minor student misbehavior. African-American students are disproportionately targeted.

“The Jefferson Parish Public School System is needlessly derailing young lives with these arrests,” said Sara H. Godchaux, an SPLC staff attorney. “Far too many school children have been pushed out of class and into the justice system. 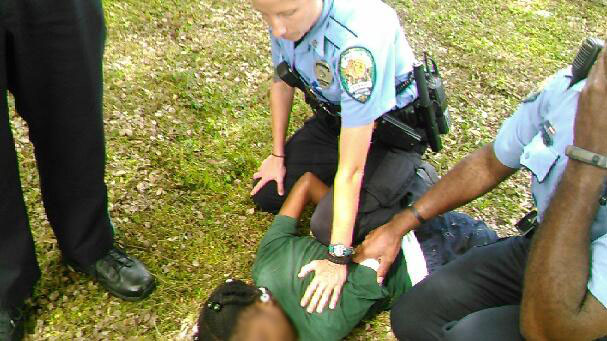 A 10-year-old girl diagnosed with autism is handcuffed and held down by police at her school in Jefferson Parish, Louisiana. The incident is described in a new SPLC civil rights complaint to the U.S. Department of Education. Source: SPLC

The latest complaint describes how one eighth-grader was arrested at school after allegedly throwing Skittles candy at another student on a bus. The boy was charged with simple battery and handcuffed in front of his class by an officer. When he cried out as the officer twisted his arm, the officer said he was going to also charge him with resisting arrest. The boy was held at Rivarde Juvenile Detention Center for six days.

The complaint also describes how a 10-year-old African-American student diagnosed with autism ended up handcuffed and face down on the ground with a police officer’s knee in her back. Police were called after the girl had an outburst in class and began running around the classroom, jumping on desks, and knocking down chairs. She climbed out a classroom window and up a tree. The police dragged her away from the tree by her ankles and handcuffed her. Several officers were on the scene.

When the girl’s grandmother arrived, she found a police officer pressing her granddaughter’s face so close to the ground that she was having difficulty breathing. Officers eventually released the girl. Since the incident, the girl has said the police are not her friends and has asked, “Why do they hate me?”

Another Jefferson Parish student, a seventh-grader, became upset during a conference with school officials and her mother this year. After arguing with her mother, she was handcuffed and charged with “interference with an educational facility,” according to the latest complaint. She was held overnight at Rivarde Juvenile Detention Center and suspended from school.

The original complaint was filed in January 2012 on behalf of four students and their families, and all other similarly situated students, with the U.S. Department of Education’s Office for Civil Rights in Dallas. The office informed the SPLC in March 2012 that an investigation had been launched.