The Council of Conservative Citizens, a white supremacist group cited by the accused Charleston killer, has a long history of associations with mainstream politicians who’ve given the group legitimacy.

Much has been made of news reports showing that the head of the Council of Conservative Citizens (CCC) – the racist group whose website helped radicalize  the suspect in the Charleston church massacre – has donated $65,0000 to Republican candidates, including presidential aspirants Ted Cruz, Rand Paul and Rick Santorum.

But far more damning has been the support the GOP has given to the CCC over the years.

Despite the group’s obvious racism, its mainstream political connections run deep. And they’re not entirely a thing of the past. The white nationalist Kyle Rogers, who operates the CCC website, was a member of the GOP executive committee in Dorchester County, South Carolina, as recently as 2013.

That’s long after the CCC became known publicly as a white supremacist group.

In the mid- to late-1990s, the group boasted of having 34 members who were in the Mississippi legislature and had powerful Republican Party allies, including then-Senate Majority Leader Trent Lott of Mississippi. 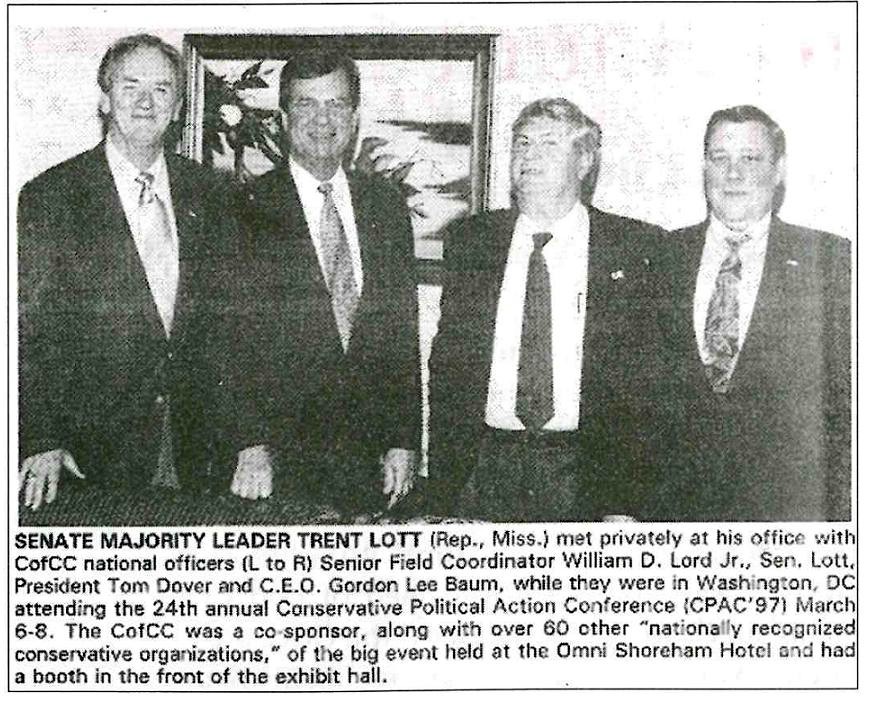 Most Americans knew little about the CCC until 1998 when it was reported that U.S. Rep. Bob Barr of Georgia had delivered the keynote address at its national convention that year and that Lott had spoken to the group five times. Lott’s uncle told The New York Times that the senator had been a member for years.

Both Barr and Lott claimed to know virtually nothing about the group. But our reporting left no doubt that the CCC was a racist hate group. It had, for example, routinely denigrated black people as “genetically inferior” and accused non-white immigrants of turning America into a “slimy brown mass of glop.” Its “Patriot of the Century” was none other than Lester Maddox, the arch-segregationist former governor of Georgia.

Reacting to the scandal, GOP Chair Jim Nicholson asked party members to resign from the group because of its “racist views.” He said members “of the party of Lincoln should not belong to such an organization.”

But, following the uproar, even as the group began to abandon its pretense of being a mainstream conservative organization and became more openly racist, politicians continued to associate with it. In 2003, South Carolina state treasurer Grady Patterson, a Democrat, was photographed with the CCC’s state chair in his office, and the group claimed to have played a “significant role” in his re-election.

In 2004, we revealed that no fewer than 38 politicians who were still in office, the vast majority of them Republicans, had attended CCC events in the previous four years. The roster included Mississippi Gov. Haley Barbour, who had earlier served as chair of the Republican National Committee, and 23 Mississippi state legislators.

In 2013, scandal erupted in South Carolina when it was reported that Roan Garcia-Quintana, a Tea Party activist and longtime national and state GOP political operative, was a lifetime member and board member of the CCC. Garcia-Quintana had been named to the steering committee for Gov. Nikki Haley’s re-election campaign.

Joining the long succession of politicians caught cozying up to the CCC, Garcia-Quintana denied knowledge of the group’s racism, even though the group’s website has referred to black people as “a retrograde species of humanity.” Despite the claim of ignorance, Haley’s camp quickly cut him loose from its committee.

Three years earlier, the CCC had been part of a movement, along with the Sons of Confederate Veterans, to rally support for keeping the Confederate battle flag flying atop South Carolina’s State House, the only Capitol where it still flew. In the end, the flag was removed from the State House to a spot nearby on the grounds.

It’s no secret that the GOP has long pandered to racist elements in the Deep South – exploiting white racial resentments to transform the region into a reliable Republican voting bloc in the decades after the end of Jim Crow.

The key to understanding the CCC’s appeal in the Deep South is its history as part of the political resistance to the civil rights movement: It’s the modern-day reincarnation of the old White Citizens Councils that sprang up in Southern states to fight school desegregation in the 1950s and 1960s. The councils – known as the “uptown Klan” because they had the same goals as the Klan but didn’t engage in terrorism and maintained a veneer of respectability – drew in many prominent segregationists who supported Jim Crow.

From its birth, the St. Louis-based CCC was led by Gordon Baum, who had been a political supporter of Klansman David Duke in his bid to become governor of Louisiana. Baum, who died this past March at 74, helped form the CCC in 1985 by using old mailing lists from the White Citizens Councils, for whom he had been the Midwest field organizer. Baum’s successor, Earl Holt, is the leader named by The Guardian as contributing to GOP candidates.

According to a manifesto on Dylann Storm Roof’s website, CCC propaganda was  his entry point into the world of hard-core racism. On its website, he found warnings about  “white genocide,” incendiary claims about black-on-white crime, and talk of South Africa. The patches he wore on his jacket, including the flag of the former South African apartheid regime, and the words he uttered during his murderous rampage – his claim that black people were “taking over our country” and “rap[ing] our women” – come straight from the CCC playbook.

Most Americans would no doubt recoil at the ugly racism espoused by the CCC. But it would be a mistake to think that this extremist organization lurks only at the extreme fringe of American society. Historically, mainstream politicians in the Deep South, including in South Carolina, have given it a legitimacy it doesn’t deserve.